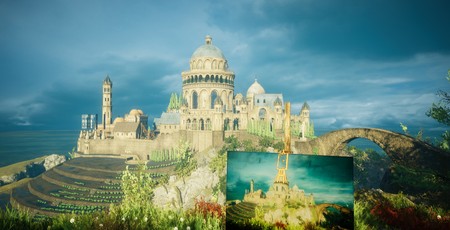 “Skyrim with paintbrushes” is a functional if simplistic way to describe Eastshade. This bitesize open-world RPG is almost immediately reminiscent of a Bethesda production, from its picturesque fantasy landscape to the sweeping orchestral score, right down to the way your character moves. Even the introduction is strikingly similar to that of Morrowind, with your character arriving onto Eastshade island in the belly of a wooden sailing vessel. Yet while Eastshade’s scope is smaller than a Bethesda RPG, it is in many ways a more ambitious game. Eastshade is committed to sheathing the sword most fantasy games rely on, aiming to deliver a non-violent adventure both narratively and mechanically.

That’s a big ol’ crutch to willingly kick away, and I was fascinated to see how Eastshade gets on without it. I’ve played many similarly ambitious games in the last few years, and most fail to conjure alternative interactions that are as satisfying at a base level as combat. Interestingly, Eastshade doesn’t quite achieve this either. But it more than makes up for it in other areas of its design. Eastshade basically takes the “photo-mode” concept that has become popular in recent years and turns it into a core game mechanic. You play a travelling artist who is on a sort of personal pilgrimage to Eastshade in memory of their recently deceased mother. Ostensibly your goal is to paint four locations that were special to your mother. But this is merely a springboard to propel you into a series of other adventures across Eastshade.

While you’re a painter by name, in practice you’re more of a photographer. Painting a scene in Eastshade amounts to selecting a canvas in your inventory, then using the mouse to crop the area of the screen that you wish to paint. Once you’ve done that, you simply press E and the painting materialises on an easel in front of you. It’s an oddly satisfying mechanic. Lining up a scene so that you get everything you want in the painting is a surprising amount of fun. However, it is a very simple implementation and nowhere near sufficient to carry a game of Eastshade’s 10-15-hour length. Part of the problem is there’s no metric by which the game can judge how “good” a painting is, and works commissioned by NPCs will always be accepted even if they are poorly composed. Hence, there’s no real impetus to think about things like lighting, mood, and so forth.

Fortunately, Eastshade doesn’t rest solely on the painting itself to create an interesting experience. You can’t simply paint every picturesque scene you come across. Canvases must either be purchased or crafted from raw materials, while your painting ability is limited by the amount of inspiration you have. Inspiration is probably Eastshade’s cleverest concept. Each painting costs one inspiration to compose, and if you run out then you can’t paint until you acquire more. You can do this by discovering new locations, completing certain quests, and reading books and notes lying around the world. Even drinking certain herbal “infusions” will help refill your inspiration bar, as well as altering your perceptions slightly to produce more psychedelic art.

Inspiration binds all the incidental activities of other RPGs into a core part of the experience, making almost everything you do slightly rewarding in some way. In a way it’s an alternative to XP, but the framing of the system makes it more engaging than abstracted experience points. Not that you need much of an incentive to explore. The environment design in Eastshade is truly delightful, despite the fact, in terms of raw visual fidelity, Eastshade is a few years behind the times. Much of the heavy lifting is done by the amazing lighting engine, which paints the island’s verdant forests and glittering rivers in a half-dozen different hues depending on the time of day. In the morning the light is crisp and fresh, descending into a deep red glow during Eastshade’s daily solar eclipse. At dusk the light turns a rich, luxurious gold, a great time to explore the glittering towers and domes of the capital city Nava.

Exploration is equally rewarding from a narrative perspective. Many of Eastshade’s quests revolve around painting a specific scene or person or animal, but there are other quests that aren’t related to painting at all. In the port town of Lyndow, the people obsess over an abandoned tower that mysteriously lights up at night, while in Nava you’ll discover a tryst between two organisations over the correct way to consume 'dream-tea'. Before playing Eastshade, my main worry was that the game would be insufferably twee. And it is a little bit, but the writing manages to find an impressive range within its pacifist constraints. There may be no killers on Eastshade, but there are thieves to track down, dodgy merchants to investigate, and spooky goings-on in the woods at night. The writing is quietly excellent, particularly when it comes to investing personality into the game’s animalistic NPCs. You’ll meet arrogant architects, obsessive ornithologists, relentlessly cheerful gardeners, and plenty of others. Sadly, the writing is let down by voice-acting that ranges from passable to highly amateurish. While I appreciate the diverse range of accents, hearing Deep South drawls and Liverpudlian dialects all in one village muddles Eastshade’s sense of place.

This isn’t the only area where Eastshade gets confused. Individually the quests are great, but Eastshade threads them together in ways that can frustrate progress. Many quests can only be resolved by completing other tasks first, and Eastshade often fails to make this clear. This is especially the case around the Nava area, where there are multiple clusters of quests that are all interdependent, none of which make said interdependence clear. Despite this, however, I never lost my patience with Eastshade, simply because it makes itself such a lovely place to reside in. As you wander around, you’ll walk through clusters of butterflies fluttering in the sunshine, and stumble upon lovers’ picnics and children playing together with toys. It may be a little wonky in places, but as an alternative to its more combative fantasy brethren, Eastshade comes thoroughly recommended.