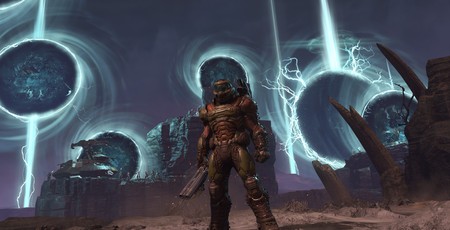 When I reviewed Part One of Doom Eternal’s Ancient Gods DLC, I said that its ferocious test of the player’s FPS skill retroactively improved the original game. I’ve since realised this isn’t quite true. Doom Eternal was always this good. I just didn’t have the capacity to recognise this when I first reviewed it. 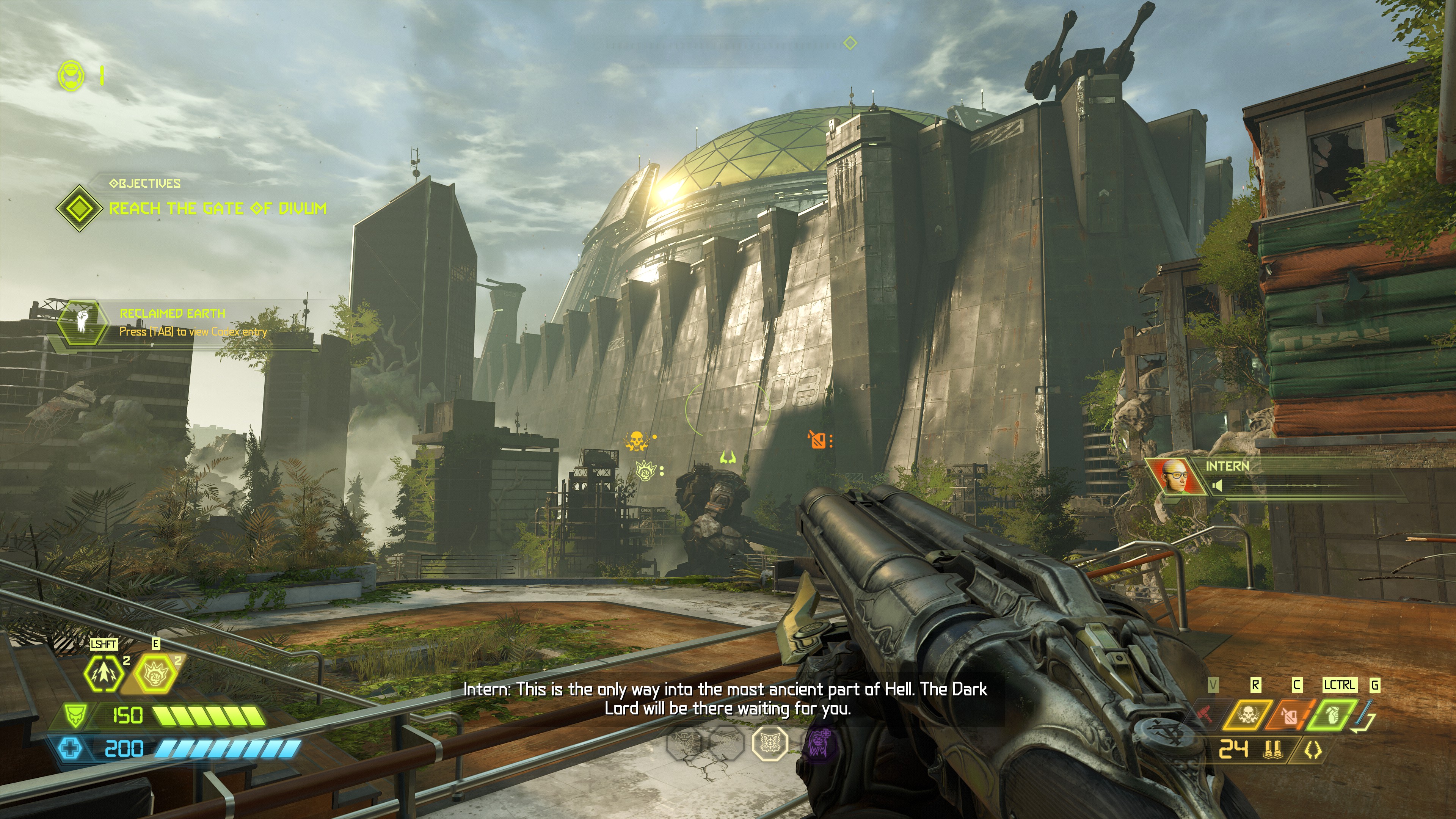 Prior to playing The Ancient Gods Part 2, I decided to run through the original game and that first bit of DLC again, to get an idea of how the whole experience flows together. While doing this, I realised that once you understand exactly how to play it, Doom Eternal is a spellbinding experience from the very beginning. All the stuff that bugged me about it when I first played it – the specific tactics for fighting demons, the platforming sequences, even the overly detailed story, all flow much better when you fully grasp what it is the game is trying to achieve.

Like Sekiro: Shadows Die Twice, Doom Eternal wants you to play it in a specific way, and the reason it wants you to do that it twofold. First, it wants to offer a genuine challenge, for your victories to feel earned. Second, it wants you to not only stand up to that challenge, but to absolutely monster it, to carve your way through even the toughest demonic onslaught as if you were walking to the shop to buy chips. 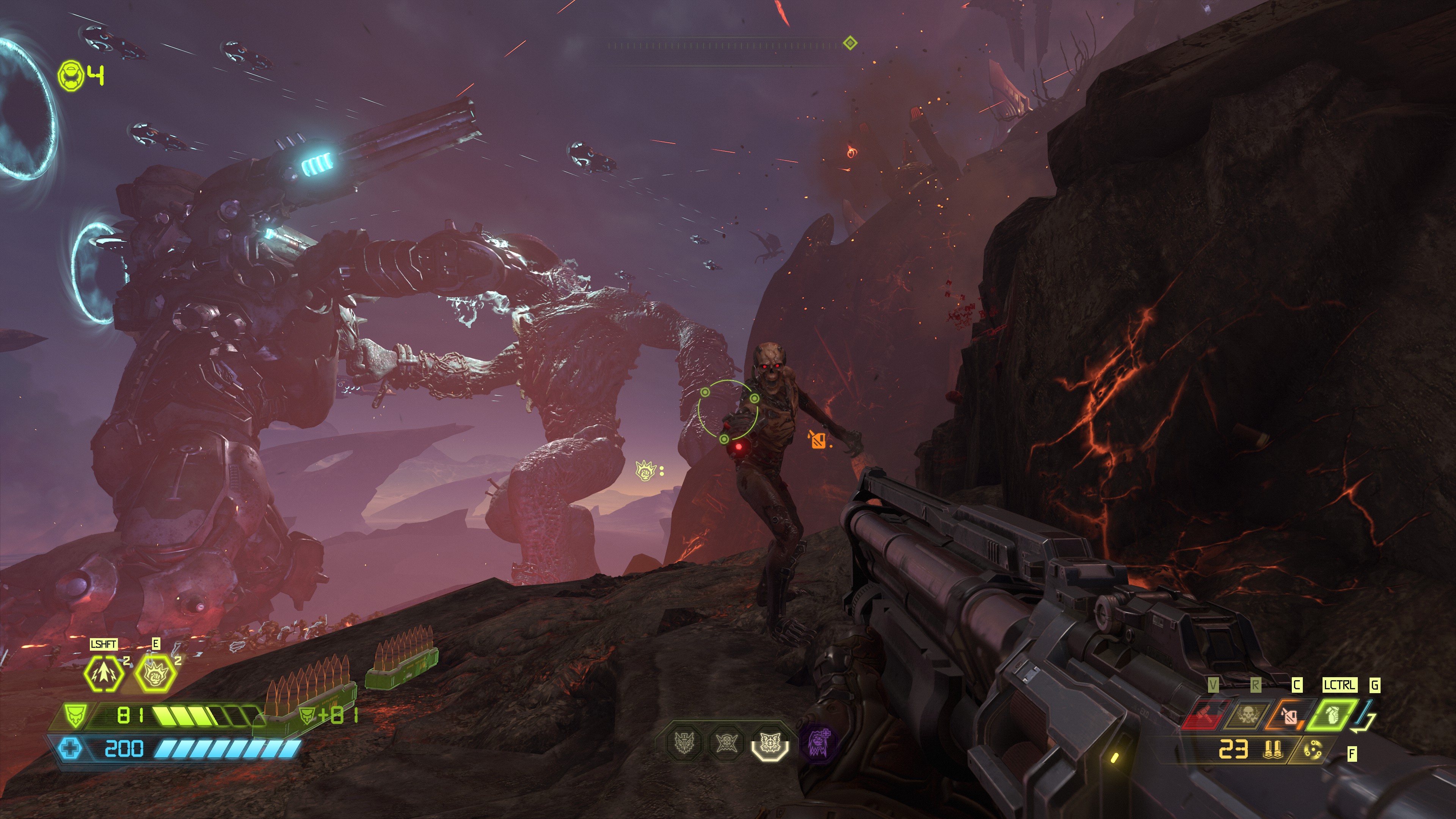 Having properly grasped this in my second run, I felt much better equipped to appreciate the design decisions of The Ancient Gods Part 2, which caps off the Doom Slayer’s celestial rampage with one final realm-hopping journey to a confrontation with The Dark Lord himself. Compared to TAG Part One, Part Two is less breathlessly punishing. But it makes up for this by being better paced, more technically challenging, and having a (mostly) fantastic sense of occasion.

As with Part One, TAG: Part Two offers three more large, encounter-heavy levels – one set on Earth, one set in Hell, and one set in the composite of realms comprising Eternal’s de-Christianised version of Heaven. Yet while the general locations are familiar, Part Two’s environmental trinity is starkly different from the locations seen in Eternal before. The first two levels in particular stray away from the apocalyptic vision showcased by Eternal, offering more verdant, more optimistic landscapes for you to stage bloody demon murder in. Reclaimed Earth, for example, shows us the fruits of the Slayer’s labours, as the planet gradually patches itself together thanks to his intervention in its destruction. 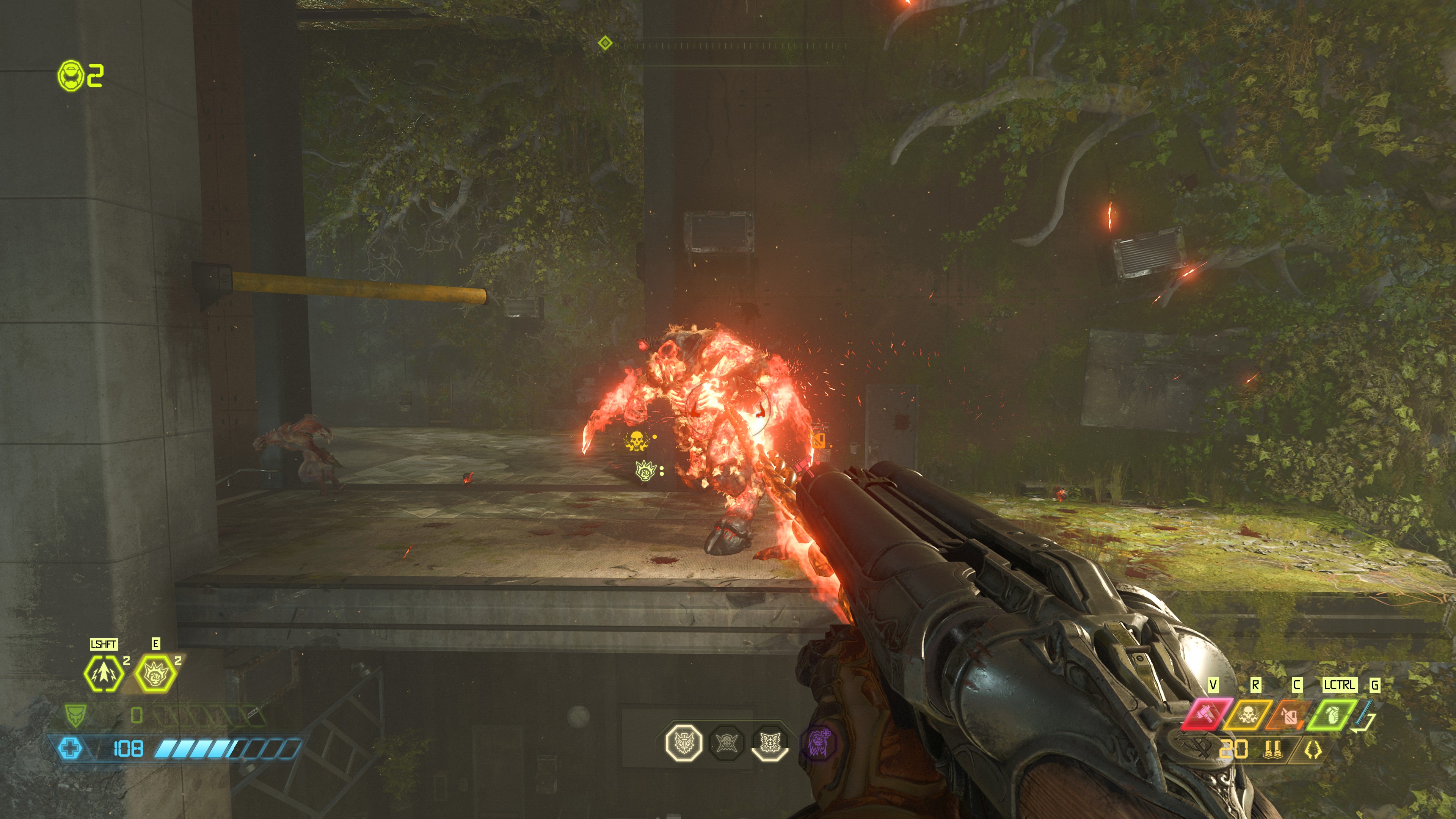 The trade-off for this greater visual splendour is that levels are slightly smaller and more focussed than Part One, with fewer secrets and other distractions to discover on the map. Whereas Eternal’s Slayer Gates and Secret Encounters carried over into TAG Part One, in Part Two these are replaced with a single new encounter type, known as Escalation encounters. These offer two challenging demon battles, the second of which is considerably harder than the first, but also completely optional, offering a cosmetic reward if you complete it.

The Escalation encounters encapsulate Eternal’s smarter approach to challenge. Whereas TAG Part One either threw huge amounts of demons at you or placed them in spaces inappropriate for fighting them (such as locking you in a narrow corridor with a Titan), Part Two introduces several tougher variants of existing demons, then uses them to make encounters more interesting. Examples include the Stone Imp, which is invulnerable to almost all attacks but weak to the shotgun’s auto-fire, and the Armoured Baron, who requires either precision shooting or deft use of the Plasma Rifle to strip him of his metal carapace. 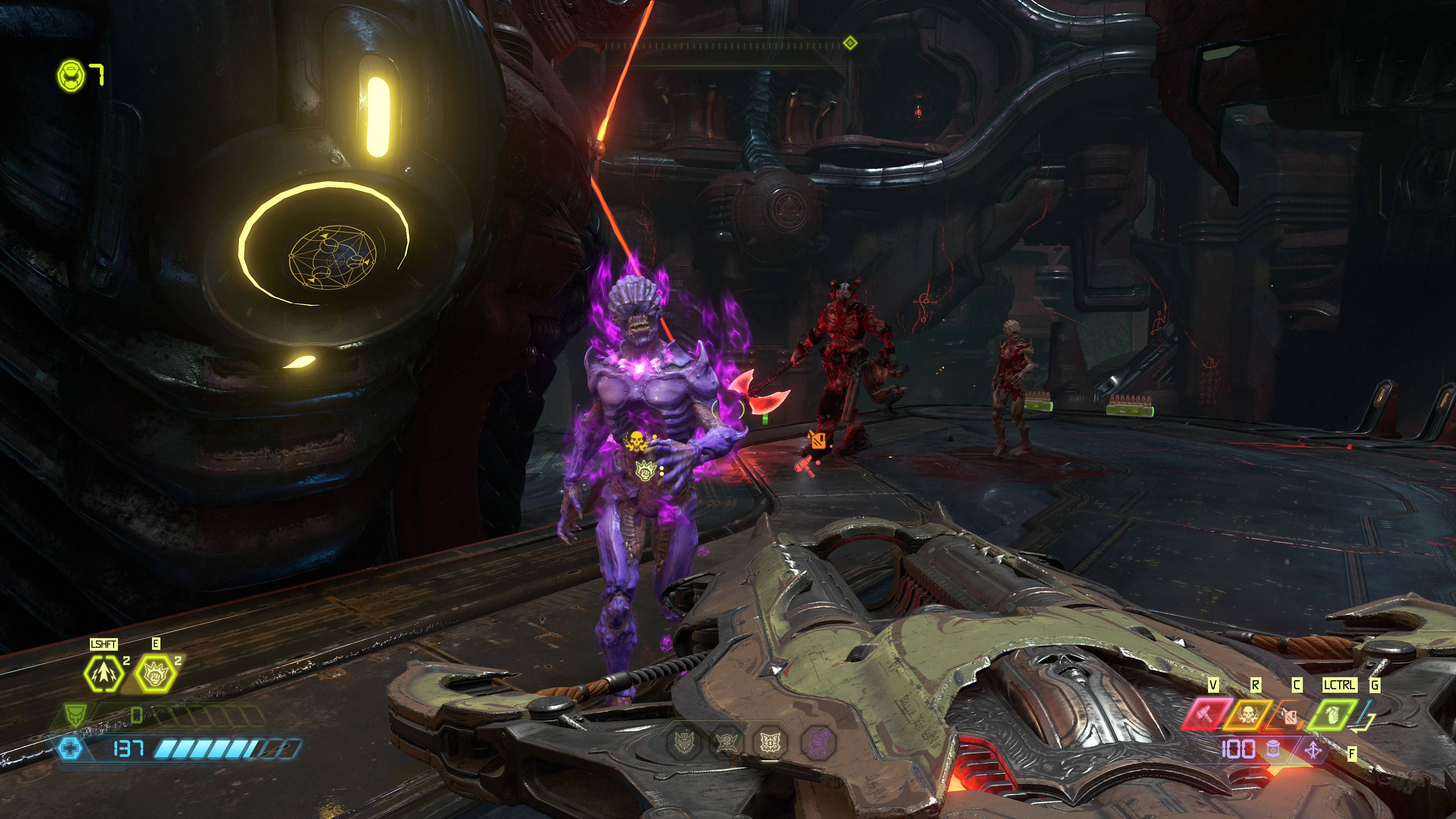 My favourite new enemy, however, is the cursed Prowler, and he’s my favourite because he’s the one new demon I always feared turning up. If the Cursed Prowler hits you, this removes your ability to dash (among other effects). In Eternal means he might as well remove your legs entirely. The Curse can only be removed by either killing the Prowler or with a Blood Punch, which is tricky given the Prowler’s tendency to teleport across the map.

This is the clearest sign yet of Eternal drawing inspiration from From Software’s design ethos of making every enemy you encounter uniquely dangerous and uniquely susceptible to certain tactics. Yet while the combat will stretch your muscle memory to its limit, Part Two’s design isn’t purely geared to making your life harder. To aid your battles against this wide range of enemies, the game furnishes you with a new weapon, a powerful warhammer that, as well as stunning enemies for several seconds, also provides a boost to resource drops. Searing a group of enemies with the flame belch before hitting them with a hammer, for example, can completely refill your armour, while smashing up demons after dropping an ice grenade will provide a massive health boost. 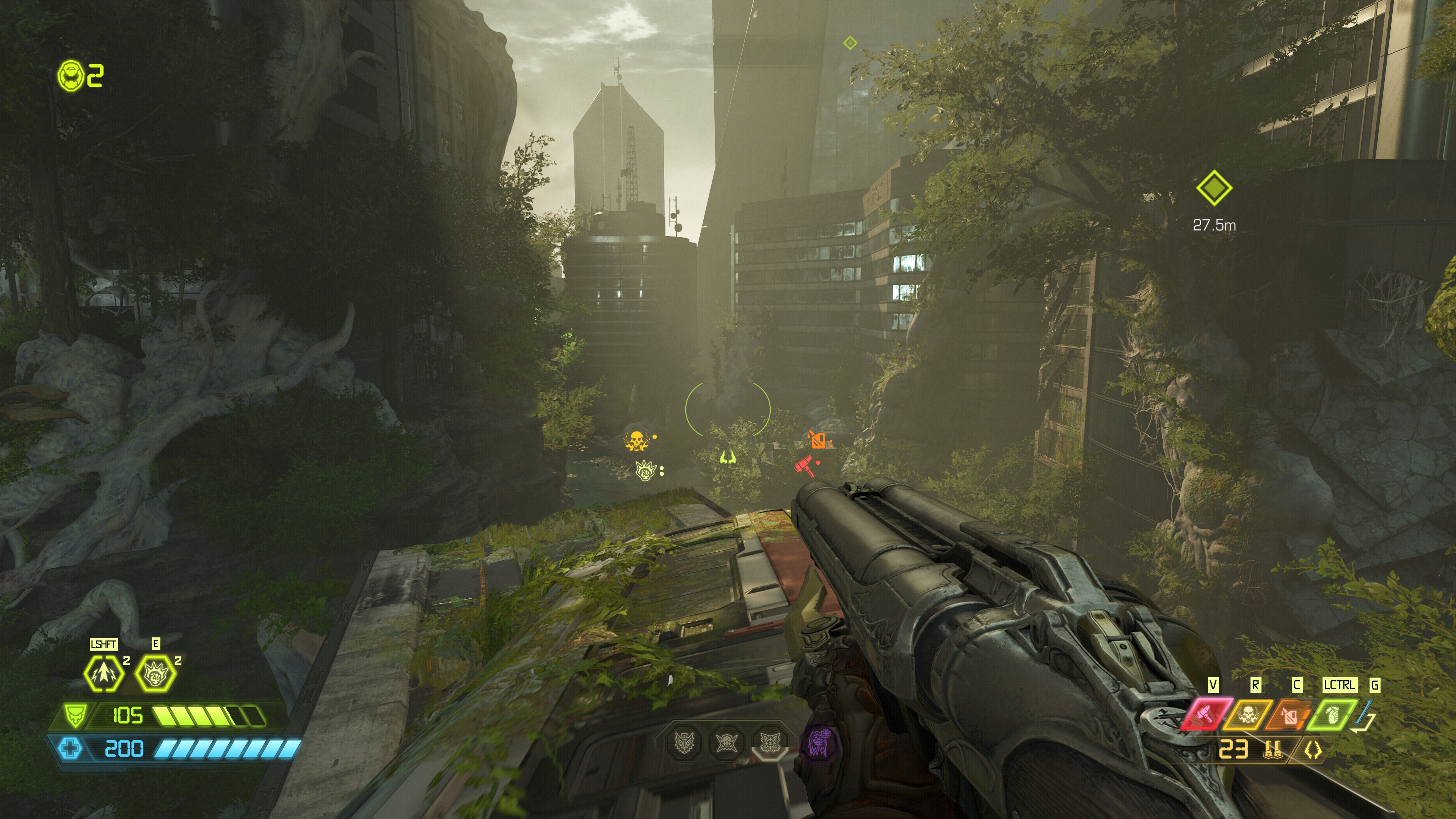 The hammer is a fantastic solution to dealing with clusters of enemies, especially on the occasions where you get mobbed into a corner and can’t escape. More than that though, it just feels awesome. The way the slayer leaps into the air and slams into the ground, pulverising any lesser demons unfortunate enough to be nearby, is unbelievably satisfying.

All of this builds toward a spectacular final battle in hell, where the Slayer is accompanied into the fray by an army of Sentinels. While they never fight together directly, with id correctly ensuring the Slayer always fights alone, the way the game threads you through this larger conflict makes for easily the most spectacular level in the whole of Doom Eternal. The sight of a sentinel mech in a bludgeoning match with a giant demon makes for a particularly gratifying backdrop to your own ripping and tearing. 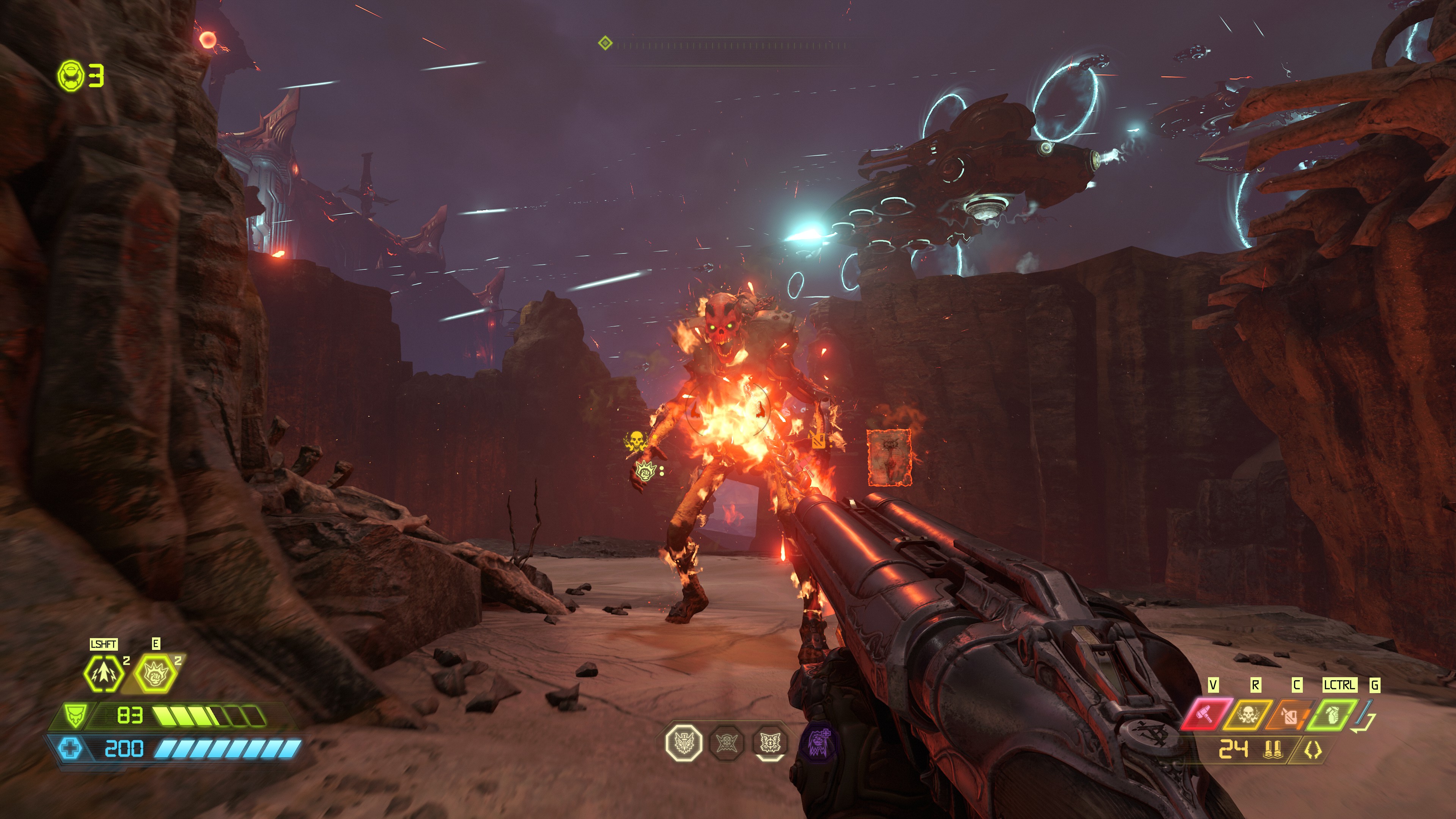 This battle in turn leads to a one-on-one showdown with the Dark Lord. This is a real endurance test of a fight, with the Dark Lord able to convert your attacks into healing aids for himself. Yet while undeniably difficult, the fight is unlikely to challenge seasoned Eternal veterans as much as it perhaps should. Anyone who has mastered the Marauder won’t sweat too much in the Dark Lord’s presence, while the spirits the Dark Lord summons to assist him would be much more satisfying to fight if they were just regular demons. It’s by no means a disastrous boss fight, and the actual ending to the game is superb. But I do think id could have gone in bigger and harder, and it definitely wouldn’t have hurt the experience.

Aside from this slight stumble at the death, The Ancient Gods Part Two represents a fitting farewell for id’s ferocious FPS. While I had reservations about Eternal on the first go-around, I’m now fully a convert to its way of fighting, and I cannot imagine how id is possibly going to top it. One thing’s for sure though, I look forward to finding out. 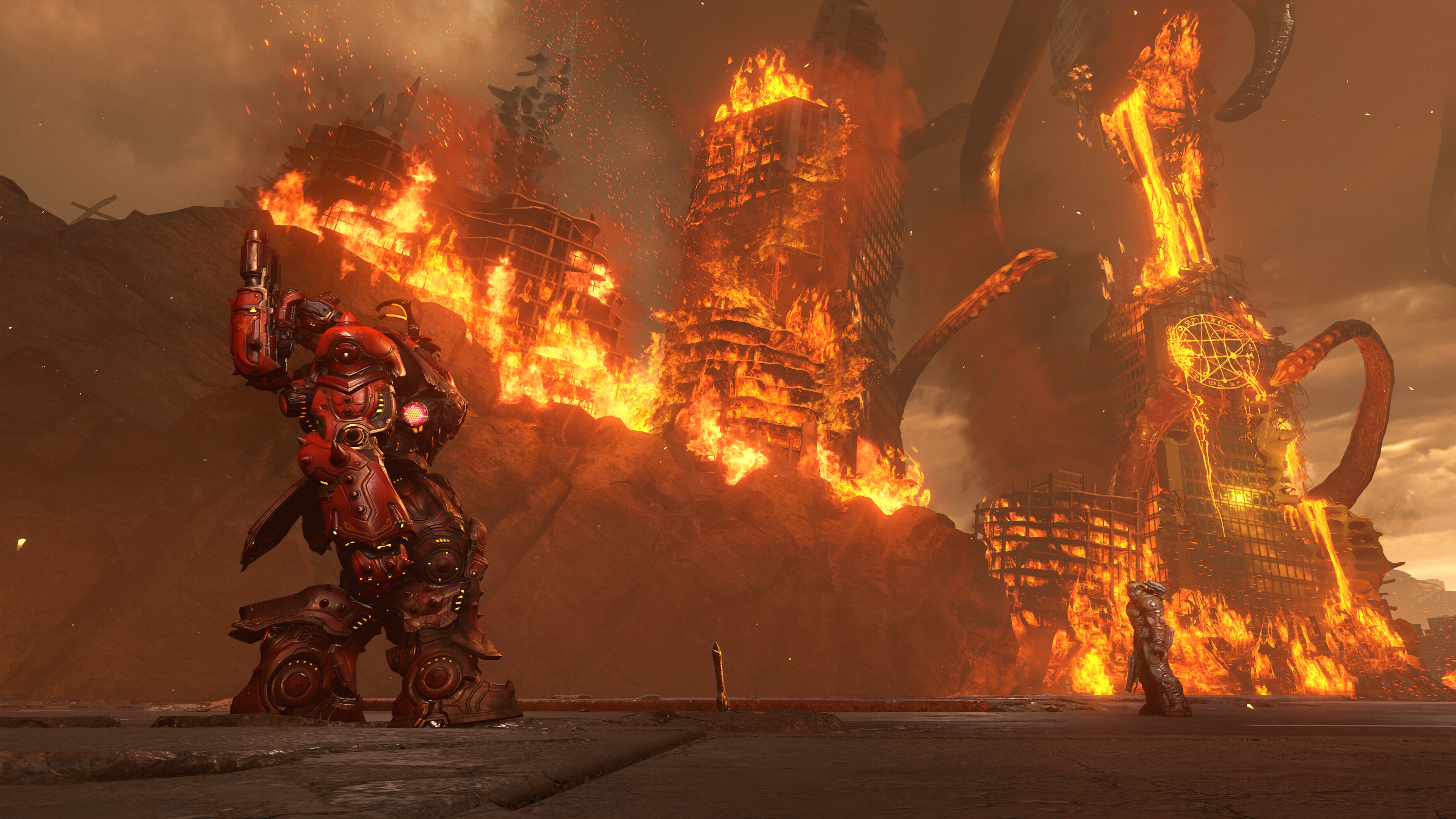