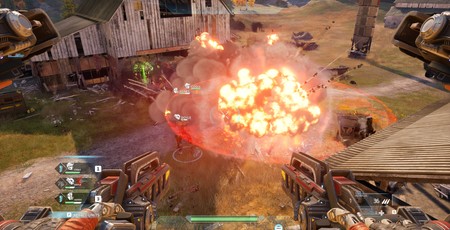 You’d be forgiven for thinking that Disintegration is a game about building destruction. The name is one reason, but the other is that by far the best thing about V1 Interactive’s shooter is the way buildings crumble. Blast a wooden barn with your Grav-cycles twin assault rifles, and the structure will shed its skin like a snake with acute dermatitis. Wood splinters, concrete crumbles, enemies explode in sparks and shards of metal. I reckon V1 Interactive could make a bloody good sequel to Red: Faction Guerrilla, if it was so minded. Unfortunately, Disintegration isn’t a sequel to Red Faction: Guerrilla. Instead, it’s a hybrid strategy shooter that’s part Halo, part Ground Control, part Overwatch, and not as good as any of those. While it has a few neat ideas, and the action is delivered with a sufficient level of quality, Disintegration simply cannot escape the fact it is painfully bland.

Like Halo, Disintegration is evenly split between single and multiplayer. The campaign takes place in Earth’s near future, where a series of cataclysms ranging from plague to war has ravaged the planet. In an effort to make themselves more durable against these threats, many humans have opted to have their brains transplanted into robotic bodies, a process known as “Integration.” The societal consequences of this is a class divide between “Naturals” and “Integrated”, with some of the latter forming a supremacy group and declaring war on the rest of humanity. The story itself puts you in the armature of Romer Shoal, an Integrated celebrity turned vigilante who escapes capture from this evil “Rayonne” faction (who conveniently demonstrate how evil they are by having glowing red eyes) and joins up with a group of Outlaw armatures who plan to take the fight back to Rayonne.

The game itself plays a little bit Halo if you were permanently stuck in a Banshee. Romer is famed for his skills as a pilot of Grav-cycles, a sort-of weaponised hoverbike that Romer uses to float over the battlefield. The Grav-cycle is the crux that connects the FPS and strategy elements of Disintegration. All Grav-cycles are equipped with twin heavy-duty firearms situated at the front of the vehicle, letting you zip around the map, blasting away the game’s robotic enemies as if you were playing Quake with “noclip” enabled. Yet while the Grav-cycle can be used as a floating assault tank, its primary role is as a mobile command centre. See, you don’t play Disintegration alone, you’re accompanied into battle by a squad of AI armatures. These armatures can be commanded to move into positions and attack specific enemies by pressing the right mouse button. Additionally, each of your squadmates has a special ability that can be deployed at any time, ranging from creating a bubble that slows enemies down, to a barrage of micro-missiles that pummel groups of opponents into scrap.

Most of your time in Disintegration is spent juggling the roles of fighter, commander, and healer. Beyond the impressive destruction tech, the game’s best feature is this pugilistic plate-spinning. The campaign’s combat scenarios are intelligently constructed, throwing different enemy types at you in carefully-thought-out waves. One minute you’ll be picking off swarms of grunts, the next focussing all your team’s fire on a single heavy enemy, while enshrining them in an AOE heal ability. Yet while the combat does enough to keep your mind occupied, I never once felt truly invested in it, nor anything else Disintegration does. To begin with, the story is extremely derivative. The plot’s skeleton is a bog-standard tale of resistance against a larger, more oppressive force, which inevitably spins out into pursuit of a MacGuffin with the dreadful name of the Architect’s Head. Both the world and the characters are poorly fleshed out. Your squad’s personalities are literally grafted on, and the game seems to expect you to like them without making much effort to make them interesting,

From a mechanical perspective, Disintegration suffers from a common problem with hybrid games, in that neither of its two halves are deep enough to be interesting. Squad controls and commands are extremely simplistic. You can either establish a base of fire or focus on particular target, and that’s more or less it. There’s no ability to select individual units and move them where you want them to be. And there’s nowhere near enough variety in squad abilities to enable much tactical play. The Grav-cycle, meanwhile, isn’t that much fun to pilot, feeling slow and cumbersome compared to more traditional FPS movement. Meanwhile, neither your weapons nor your squad’s abilities feel as powerful as they should, lacking  the raw satisfaction that makes shooters like Doom and Halo sing. What doesn’t help in the campaign is that your weapons are limited to what you’re given at the start of each level, which massively restricts your own ability to approach different combat scenarios. By the end of the third mission, I was thoroughly sick of the introductory assault rifles, and was deeply disappointed to see them return just two mission later (albeit alongside a new marksman rifle, which was somewhat more enjoyable to wield).

The result of this is, by the campaign’s halfway point, you’ve already seen most of what Disintegration has to offer. The multiplayer fares a little better. Structurally, it’s a fairly standard competitive FPS, with game modes that include Conquest-style point control and a Rush like Attack/Defence scenarios. But the fact that each player controls their own squad of AI units adds an extra layer of complexity to the proceedings. For example, in Zone Control games, players can’t actually take control of zones, only your AI squadmates can do that. So you need to guide them to the control point and then defend them from above while they capture it. Unfortunately, the multiplayer’s setup also makes it less immediately engaging than other, similar games. Having to control your own squad in the chaos of a multiplayer battle takes time to learn, while the Grav-cycles’ more inertial movement is less satisfying under the fingers compared to more earthbound shooters. That isn’t necessarily a problem in and of itself, but it is a problem in a genre chock-full of games that are immediately engaging.

I think Disintegration’s ideas could work, but they need considerably more depth and refinement to contend with the current titans of multiplayer FPS. The campaign becomes tiresome way too quickly, while the complexity demands of the multiplayer simply don’t deliver the payoff necessary to make investing in it worthwhile. Disintegration may want to be a modern Halo, but in the end, it had me thinking much more of Anthem.