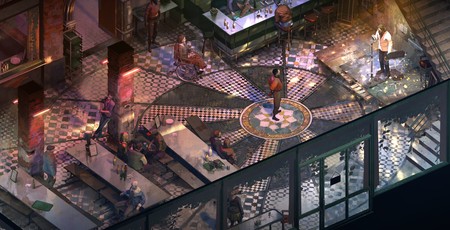 Disco Elysium is an RPG in which rather than gathering your party before venturing forth, you instead gather your thoughts. It’s part CRPG, part epic choose-your-own-adventure-novel, part alternate socio-political history of the last 100 years, and part meditation upon the human condition. It’s also utterly, resoundingly brilliant, likely the best-written game I’ve ever played and the most distinctive RPG I’ve experienced in years. It isn’t always the easiest game to grapple with, but like its catastrophically broken protagonist, the sheer force of Disco’s personality more than makes up for its flaws.

Disco puts you in the role of a nameless detective who, after the bender to end all benders, awakes on the floor of his trashed hotel room to discover he’s lost both his dignity and his memory. The next 30-ish hours involve attempting to put yourself back together while investigating the case of a hanged man dangling from a tree behind your hotel. That mystery only has one possible solution, but the mystery to your identity can be solved however you like. You can choose to uncover every nugget of your past - your name, your case-history, how you ended up as a walking bag of ethanol. Or you could eschew your previous self entirely, instead becoming a Superstar Communist cop who extols the virtues of Mazovian economics while shooting finger pistols at every person he interacts with. You could become a fascist thug who wears a suit of ceramic armour and introduces himself with the phrase, 'I am the law.' You could spend the whole game wearing one shoe and telling everyone how sorry you are without knowing even what you look like.

In a way, Disco Elysium is one huge character creation screen, facilitated by a fathomless dialogue system and one of the most inventive skill systems I’ve encountered in an RPG. Rather than a traditional ability system or class selection, Disco instead has 24 unique skills, each of which represents a part of your brain. If that sounds daunting, is absolutely is, although Disco makes things easier on newcomers by offering three detective archetypes to choose from. I went for the 'genius' detective, equipped with a highly logical brain stuffed with knowledge about the world and able to visualise crime scenes down to the smallest detail. But he’s also physically weedy and terrible at communicating with people on an emotional level. This choice immediately led to some interesting situations. Upon initial inspection of the hanged man’s crime scene, for example, my character was able to visualise the footprints in the yard exactly, gleaning a detailed picture of who likely put him there. But he also couldn’t get anywhere near the stinking, rotting corpse without vomiting explosively, preventing him from performing a field autopsy. In the end, it was only inhaling some ammonia and being heckled by a local child that enabled him to perform the examination.

The number of avenues available through each quest is truly impressive. Yet skills don’t just enable you to better perform specific tasks; they’re also characters in their own right, communicating directly to you in dialogue, and even trying to sway you into doing certain things in certain ways. As an intelligence-based character, one of my most frequently recurring inner voices was Encyclopedia, a cognitive know-it-all that loves nothing better than to drop a big chunk of lore into the middle of a conversation. Visual Calculus, meanwhile, is the equivalent of a nosy neighbour, constantly observing everything that’s going on (presumably from between a crack in the curtains).

What’s so impressive is that almost every skill available has a clear and distinct personality. My favourite skill is Electrochemistry, which is a physical skill (skills still talk to you even if they’re not part of your primary skillset). Essentially your pleasure/pain centre, Electrochemistry basically just wants drugs all the time. Anytime narcotics or alcohol come into a conversation, Electrochemistry butts in going, 'Drugs? I like drugs. Why don’t we take some drugs? Drugs!' This is a perfect example of how skills are more than just points you rack up to beat skill checks. They’ll inform you about the world and even help you solve quests, pointing things out to you and even suggesting the appropriate way to respond in conversations. Crucially, though, they’re not always reliable, and your skills can lead you to say and do truly ridiculous things. Hence, you need to be careful which dialogue options you select, as some of them can actually harm your chances of passing a skill check. For example, if you want the owner of a local bookstore to let you in the back, it’s probably not a good idea to accuse her of being a crummy parent.

Disco Elysium is undoubtedly a clever game (and clearly wants you to know it). But it’s also genuinely hilarious. When your character is asked for his name by the hotel manager, you’re able to respond, 'I’m currently in-between names.' Shortly after this, you discover you’ve racked up a huge bar tab, which you can attempt to dodge. Failing this skill-check results in your character leaping across the room, spinning around to give the bartender the finger, before crashing into a wheelchair-bound woman, knocking himself out. If that sounds like it might be punching down, it’s worth noting that your detective comes off far worse than either the woman or the wheelchair. Indeed, as well as being wry and imaginative, the writing is incredibly contemplative and thoughtful, with nuanced characters portrayed through a considerate yet judicious eye. Highlights include Cuno, the foul-mouthed kid who lives in is own personal fantasy land, the undisputed King of the Back-Lot, and Evart Claire, the fat and unbearably smug union leader, in love with his own cleverness. But my favourite character is undoubtedly your partner, Kim Kitsuragi, who accepts your situation with a quiet patience and responds to your varying personality quirks with a blend of dry wit and weary resignation.

Similar detail is ascribed to the wider world. Disco Elysium takes place in fictional a country called Revachol, specifically a heavily depressed district of Revachol known as Martinaise. Its world is an amalgam of European history between 1900 and 1970, and alongside its detective story, the game offers full-on explorations of the key sociopolitical themes of this era: organised religion, fascism and racist theories of eugenics, moralist centrism, and neo-liberalism. Your character can ascribe to or denounce any and all of these theories, although it will also call you out on their inherent flaws and inconsistencies. It will let you discuss and debate theories of eugenics with a towering, musclebound racist, but it isn’t afraid to point out that yes, he is unquestionably a massive racist and his view of the world is entirely irrational and unscientific. Perhaps most notably, Disco Elysium is a eulogy for socialism. In investigating the murder, your detective finds himself trapped between a corrupt and thuggish workers union and the militarised wing of an uber-power import/export company. Martinaise itself is a walking corpse of a town; its fishing industry is long-since collapsed, and its sole business area has seen so many failed enterprises that the locals believe it is cursed. Caught between the floundering pipe-dream of capitalism and a union that is more of a criminal syndicate, Disco explores how fragile the simple notion of looking after one another is.

There’s so much else here to celebrate too. The art of Disco is incredible; its gorgeously brushed landscapes convey the chill of Martinaise’s sub-arctic harbourside on the cusp of spring, such that returning to the speckled disco lights of the Whirling-in-Rags every evening really does make you feel warmer. The music is wonderful too. I love the melancholy trumpet that blows through the commercial area whenever you first step outside. I like how clothes give you different skill bonuses, and that it’s a viable tactic to pause a conversation and put on a ridiculous poncho because it gives you the +2 drama you need to pass a skill check. No doubt it’s clear by this point that I am deeply in love with Disco Elysium. However, there are some issues that I feel obliged to highlight. First off, Disco Elysium’s story is split into days. Some events only occur on specific days, while certain quests can only be pursued at specific times. But time doesn’t move of its own accord. Instead, it moves according to dialogue, with a minute passing every paragraph or two.

There is a logic to this, as it gives you some control over the game’s progress, while also giving a sense of the progression of the day and enabling the game to change events and character locations on different days and at different times. But the only way you can skip time is by reading books, and this isn’t a very accurate way of doing it. Consequently, you can find yourself looking for conversations to have just to pass the time, which isn’t ideal. Moreover, while I love the game’s writing, there are times when a good editor wouldn’t have gone amiss (i mite no a guy! - ed.). Some conversations could have been cut down, and I don’t need to know about every scrap of lore in the game. Also, if you don’t like reading in games, then make your purchase with caution. It is amazingly written, but the game is about 90 percent reading.

Lastly, and this isn’t so much of an issue as a clarifier, but ZA/UM has claimed Disco Elysium takes 60-90 hours to complete. Either you’d have to be an incredibly slow reader, or they’re referring to playing it several times to see all the character permutations. Either way, my main play-through took 31 hours, and I probably could have completed it in 25, as I re-loaded several older saves to explore different quest avenues. Nonetheless, those 31-ish hours offered some of the richest, most intelligent, most touching, and downright funniest role-playing I’ve ever experienced. Disco Elysium is a hands-down masterpiece, a chilly and cerebral detective story that somehow manages to be totally absurd and unnervingly real, featuring one of the most malleable RPG protagonists in the history of the genre. It may love the sound of its own voice, but when your voice is this fucking strong, who wouldn’t?