The struggle to define the difference between games and art has raged boringly in the background of the industry for many years now, with critics and creators drawing confident lines in the sand only for a tide of new releases to wash them away over and again. Is interactivity and firmly set rules what defines a game - and if so then how does that fit with sandbox games and the idea of player agency?

These are arguments that the commercial release of Dear Esther by TheChineseRoom, based on the 2008 mod of the same name, will dredge up again. Is this boiled-down tale of love and loss a game, or is it more of an interactive exhibit filled with unpredictable flourishes?

It's a discussion which seems uniquely relevant to Dear Esther. Created by University of Portsmouth academic Dan Pinchbeck and updated by Mirror's Edge artist Rob Briscoe, Dear Esther initially appears to have very little gamification in it at all. There are no aliens to slaughter, no motocross bikes to delicately balance across 2D tracks and no crowds to impress with the strumming of faux-guitars.

Click to enlarge
All there is, is a man on an island. The man can't run, can't pick up or interact with his environment and can't even decide when to turn his torch on or off. One of the more subtle differences between Dear Esther's first and final iteration is that, in the commercial release, he can't even jump - a decision made by Briscoe to help focus the game and control the pacing and mood.

So, all this man on the island can do is walk and talk. There's nobody for him to talk to and only one place for him to walk, but that doesn't hold him back. He strolls across the island and speaks his mind as he goes - turns out he has a lot to say.

Not a lot of it is happy. There's been some big changes in this mans life and, while we don't want to give too much away, it's probably not a surprise to hint that the titular Esther is notable mainly for her absence. Finding out exactly what happened to her and how this man came to be on an island in the Hebrides though is the point of this maybe-game - and the puzzle weaved by the monologues is one of the more overtly game-like elements of Dear Esther.

Click to enlarge
Your man's speeches don't come in order in Dear Esther, you see - and not only is the plot written in such a way so that parts of it overlap and defy one another, but it's also slightly reshuffled every time you visit the island. There are common touchstones throughout each journey - scrawled electrical diagrams on cavern walls and fevered mutterings about a stretch of motorway in southern England - but the details shift.

Eventually, you may start to doubt the sanity of your man. Increasingly incoherent as you progress through the roughly three or four hour adventure, he weaves elements of the fantastical into his tale - things that you'd know outright as nonsense if there wasn't supporting evidence daubed on the island's interior in fluorescent paint. So, while you may doubt your mans mental health and may wonder if you can trust anything he says, you're often inclined to believe him anyway. You never know for sure.

And that's the point; it's a puzzle. Maybe this is a game after all. 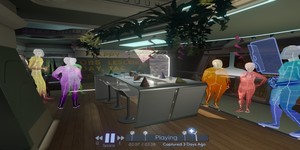