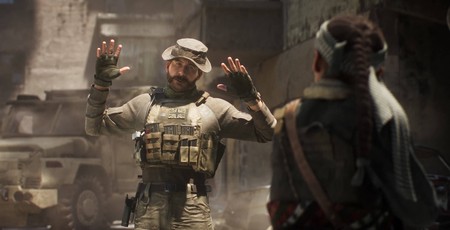 Modern Warfare is at its most distinctive when it is at its least spectacular. Call of Duty has blown me up and battered my eardrums so many times over the last 16 years that it’s hard to feel much when it does it all over again. I was there at Bastogne. I was there at the Point du Hoc. I was there at Pripyat. Two years ago I was even there in space.

There’s only so many times you can do the big explodey-whistley-ear thing (official designation) before it starts to feel like you’re running out of ideas. Modern Warfare 2019 has more of these moments both in single and multiplayer, and they’re as technically impressive and unoriginal as they have been for about a decade. But when Modern Warfare gets smaller, more precise, more specific, that’s the point at which this latest iteration gets interesting. Sometimes to the point of being disturbing. There are three strings to Modern Warfare’s bow (making it less of a bow and more of a guitar): single-player, cooperative spec-ops, and competitive multiplayer. We’ll go through them in turn. The new campaign has been dubbed a reimagining of the original, which in reality means it muddies the water between being a prequel and a reboot. The primary setting is the fictional Middle-Eastern country of Urzikstan, a nation embroiled in a cluster of wars for the best part of 20 years. First they fought the Russians, then they started fighting themselves, and now they’re fighting themselves, the Russians, and the Americans in a messy civil war with proxy nations interfering on both sides.

The opening missions sees you assault a Russian military encampment across the border, assuming the role of the CIA operative known as “Alex” as he searches for a brace of illegal chemical weapons. Devastating the compound with an airstrike (which given what you’re searching for seems somewhat reckless), the weapons are retrieved - then immediately stolen by what is believed to be Al Qatada – one of the sides in Urziskstan’s civil war. With a potential crisis brewing, weaponised moustache Captain John Price is assigned to track them down, eventually joining up with Alex alongside S.A.S Sergeant Kyle Garrick, and Farah Karim, the leader of a militia known as the Urzisktan Liberation Force.

While the opening missions sets the scene, it’s the second mission, which portrays a terrorist attack in London, that sets the tone. In the run-up to launch, Modern Warfare’s marketing has made much of the game’s grittier, more realistic edge, shifting away from the cinematic, action-movie feel of the originals. What this basically means is that Modern Warfare regularly exposes you to some absolutely fucking horrible scenes, which include, but are not limited to terrorist attacks, public hangings, mass executions, torture, civilians being gunned down, and child murder. The best way I can summarise my feelings about this direction is 'conflicted'. The general idea is to provide a realistic warts-and-all portrayal of the difficult, unpleasant, and traumatic situations that soldiers on the battlefield are confronted with. In some ways it works. The terrorist attack at Piccadilly Circus effectively portrays the confusion, disorientation, and fear induced by a terror attack, with you futilely trying to defend civilians from an overwhelming attacking force while one atrocity after another plays out around you.

Later on, there’s a flashback mission centred around a bombing in Urzikstan which is even more fraught and disturbing than the attack in London. Again, it effectively confronts you with the reality of the conflicts that Modern Warfare bases its campaign upon. There’s also a strength to the character writing here that grounds the sequence, showing us the humanity of the people suffering the brunt of the inhumanity inflicted upon them by Urzikstan’s civil war. This is what Modern Warfare’s story does best, giving voices to people and cultures who in previous war games have never had one. This is most evident in Farah Karim, who reveals herself to be not just a key ally to Price, Garrick et al, but the central protagonist of the story. Modern Warfare makes considerable effort to show us the war from the Urzikstan perspective, and not just in a passing, token gesture way, but as a fundamental basis for everything that’s happening.

Sadly, as the game goes on, it becomes increasingly clear that Modern Warfare doesn’t know when to let off the gas. There are scenes both in the London and Urzikstan sequences I mentioned that don’t just confront you with the horror but shove your face right into it, to the point where it begins to feel pornographic. While playing, I found myself thinking of the excellent war documentary Waltz With Bashir, which plays out for most of its 90 minutes as an animated film exploring a massacre that occurred during the Lebanon war. Then, in the final moments, it lifts the cushioning veil of the animation, exposing you to the terrible reality it is depicting. It's hugely effective, but it works because Waltz With Bashir is a war film about memory, and how over time our minds cushion us to the atrocities of the past. The problem with Modern Warfare is it doesn’t have that clarity of theme, and as such all it can do is keep lifting the veil, going, 'Look at the horror! Look at how horrible all this is!' - to which the natural response is, 'Yes, it is. But what’s your point?', and to this Modern Warfare doesn’t seem to have an answer.

This isn’t to say what it attempts is entirely invalidated. There are other areas, where this commitment to authenticity pays off. Shortly after the London attack, you participate in a mission called Clean House, a Zero-Dark-Thirty style raid on a London townhouse. What follows is a supremely tense, almost SWAT-like experience where you’re slowly moving room-to-room in a building that contains both terrorists and non-combatants. What’s interesting about it is, again, this mission gives a voice to people who don’t normally have one, showing you terrorists don’t exist exclusively at the far end of a gun. As you move through the house, you hear people discussing their role in the recent attack, before heading to the kitchen to 'put the kettle on'. You experience a situation that is both extreme and mundane at the same time, and it produces a fascinating cognitive dissonance. You’re both motivated to do the job you need to but also mindful of how, in this situation, you’re the aggressor, and your violent incursion into their domestic life is only likely to embolden their view of you as the enemy.

There are a couple of similar missions later on in the game, including the excellent Going Dark, which verges on being a true tactical shooter, letting you complete objectives and explore the level as you like, shooting out lights and picking your targets carefully to remain undetected. I could have happily played a whole game like that. Modern Warfare isn’t strictly a tactical shooter, but it can pull of a convincing facsimile of one when it wants. Inevitably, though, Modern Warfare feels obliged to reflect upon the spirit of the original games. Consequently, we get the shock-and-awe U.S. Marine raid on a fortified hospital, and the ULF attack on a Russian-occupied air-force base, complete with explosive drone gadgets. As with the originals, there’s also a lot of cinematic inspiration. An excellent mission inspired by Argo sees you defending a U.S. Embassy from Al-Qatada attacks, before moving out in the town to establish a front-line against repeated assaults. There’s a brilliantly eerie moment where the civilians clear the streets in the distance, the town suddenly falling silent as the Al-Qatada forces move quietly into position. 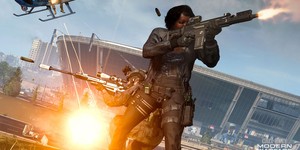 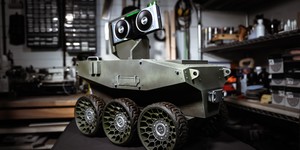