I’m tired today and I’m bearing the brunt of a sugar crash, so I really can’t be bothered to think of a really relevant way to kick off this article, so I’ll instead talk about something I’ve noticed about the Burnout games.

Which is; girlfriends (or boyfriends I suppose, but usually girlfriends) love the Burnout games. The hyper-sensitive may suggest that it’s a tad sexist to say so (it isn’t), but it’s true. If you’ve got a significant other that you want to game with, but that person isn’t a big gamer, then Burnout is a great introduction to the art of game-playing.

The simplest reason for this I think is that, although Burnout requires some skill, it uses skills that everyone already has and it rewards you no matter what. Win a race? Have a trophy. Lose a race? Watch your car smash into a billion pieces. Both are good.

Crucially, the games are hugely accessible as well and even uneducated gamers can get their heads around the basics and learn how to cause those huge crashes that the game so anarchistically encourages.

All the games that is except for the most recent title, unfortunately. Where the other games in the series always had simple menu systems that let players choose their race events straight away, Burnout Paradise demands that players drive their cars to specific intersections in the free-roaming cities and rev their engines.

It was the one thing we hoped that Criterion might fix in this latest game, but alas no. If you want to start a Road Rage event then you’ve still got to trawl the city in your car, looking for the right set of traffic lights. Oh, and you’d better hope you’ve got the right car and are there at the right time of day too, or the effort will be more wasted than Amy Winehouse after a stint in rehab.

That said though, there are some things that Criterion has improved on for the PC release of Burnout Paradise. All the combined updates and downloadable extras from the console versions for example have been included, gratis. Now you can race motorbikes as well as supercars, reclaiming the un-pedestrianised streets of Paradise City all over again.

The main new addition though comes in the form of a new multiplayer mode for the game – one targeted firmly at offline multiplayer. More specifically; hotseat multiplayer with girlfriends. We really can’t think of any other reason that EA would add in a load of hippy-swirls and rainbow colours to the HUD other than a misguided attempt to appeal to the female of the species.

Cynicism aside though, Party Mode does look very pretty...

Despite all the indecently bright colours, we do have to say that the gameplay in party mode is still pretty good – even though the scoretables take an age to load and are totally unskippable. OK; I know I just totally humiliated Harry in that last race, but can we now just move on to the next round?

What makes the party mode so good despite this is that the game uses a totally different playstyle to the bulk of the game, which is pretty much identical to the console version of Burnout Paradise. Instead of being all about races and crash multipliers, it pits played into one of three different types of challenges – Stunt, Speed or Skill. 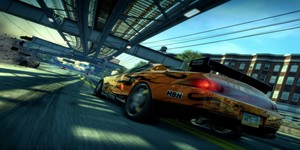 Bryn takes a look at the latest racer from Bizarre Creations and wonders how good the PC version is.

Criterion: Nobody has ever "maxed out a console"

Burnout developer Criterion Studios has claimed that, contrary to what EA has said, nobody has ever maxed out a console.