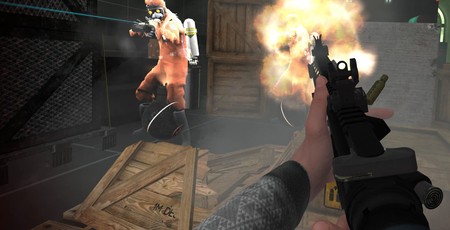 We missed out on Boneworks when it originally launched. But with Half-Life: Alyx dropping onto VR headsets like a Combine invasion force later this month, now seemed an opportune moment to kick the tyres of Stress Level Zero’s much-lauded VR title. This is because Boneworks is kind-of a Half-Life game itself, owing a considerable debt to the physics puzzling and general structure of Valve’s classic shooters. Specifically, Boneworks is what you’d get if you stuck Half-Life 2 and Garry’s Mod into a blender, then poured the resulting mixture into a VR headset. It’s equal parts game and creative toolset, a transition point between VR as disposable gimmickry and offering a sustained and coherent experience.

As befitting such a concept, Boneworks’ story takes place inside a half-finished computer program. That program is MythOS, a digital city being built by tech supergiant Monogon Industries. You play as Arthur Ford, Monogon’s Chief Security Officer who somehow becomes trapped inside Monogon’s virtual metropolis (really earning that paycheque there Arthur). To get out, he needs to locate the clock tower in the middle of the city and hit the reset switch, contending with the blocked-out puzzles and mid-development enemies he encounters along the way. The opening half hour of Boneworks is a structured tutorial, framed as a virtual museum tour that guides you through the “history” of VR. You’ll learn the basics of moving around, climbing, jumping (yes Boneworks is a VR game with jumping), how to pick up and throw stuff, and how to wield the game’s highly detailed weapons. All of this is delivered with a light-hearted and wry tone. For example, Boneworks details teleport-based movement via an exhibit that features a caveman.

Experienced VR players will already be familiar with most of what Boneworks teaches during this stage. What is different is how these interactions feel. Boneworks’ is based upon a detailed physics simulation intended to lend weight and texture to each object in the game. In one part of the tutorial, Boneworks allows you to smash a bunch of objects with a variety of tools, taking a claw-hammer to some crates or a sledgehammer to a pane of glass. All of these objects have a distinct sense of presence lacking in many other VR titles. The sledgehammer has a palpable weight to it, the glass “feels” like glass when it breaks. Perhaps the best example are the guns, each of which must be loaded and cocked in an authentic fashion before being ready to fire. Ballistics are simulated too, so you can feel the force of the weapon when you fire it and get a sense of the impact when the bullets hit their target.

Once you’ve finished the tutorial section, the main game offers a blend of FPS and physics puzzling, all of which has a strong whiff of Half-Life 2. The first area you explore is a dilapidated city square with foreboding soviet-brutalist architecture, complete with a physics enabled playpark. One of the first weapons you pick up is an orange crowbar, and one of the first enemies you encounter is a scuttling robot spider that leaps at your face. All it's missing is a friendly guard called Yenrab who has an irrational fear of dogs. Crucially, though, Boneworks isn’t a rip-off of Half-Life. Instead, it pays homage to a game Boneworks uses as its structural basis. Like Half-Life, Boneworks has a keen understanding of how to pace a linear first-person game to ensure the player is consistently engaged, frequently changing up environments and scenarios, while enabling broad toolset so that players can engage with both combat and puzzles in a creative way. For example, you can use your guns to take down the game’s wireframe enemies if you like, but you could also use a hammer, or drop a breezeblock on their heads from a height. Similarly, you can often fudge puzzle solutions by using the wrong items in the right way. It’s a bit like taking on the Crystal Maze while drunk.

From a tactile perspective, Boneworks is rarely less than satisfying, although I think it’s better in some areas than in others. Ranged combat is fantastic, with enemies reacting dramatically to gunshots, flopping to the ground in a physics-powered heap, or tossing their guns into the air, laser-sights dancing across the walls like you’re inside some deadly rave. Melee combat is decent too, although I don’t think it’s quite as intuitive as that of The Walking Dead: Saints and Sinners. I always found I couldn’t grip weapons in quite the right place to get the best swing, although this is perhaps because I was playing on Oculus Quest (via the Oculus Link), and so didn’t have the grip fidelity of afforded by the Valve Index. The puzzling element is probably the weakest area of Boneworks. Don’t get me wrong, often the puzzles are lots of fun, but I found a lot of the early puzzles to be quite poorly signposted, and being stuck on a puzzle in VR is about as much fun as sitting in a dentist waiting room. This happened several times during the first hour or so, and it very nearly killed my enthusiasm for the game.  Also, anything that involves gripping a solid surface runs the risk of causing your own character model’s physics to flip out, which is slightly traumatising when seen in VR.

Indeed, it’s worth noting that Boneworks doesn’t do much to cater toward less-experienced VR players. There’s no teleported movement and no anti-motion-sickness settings, and Boneworks involves a lot of fast, jerky movement. Not only are you regularly having to jump around to cross gaps, there are several scenes that might cost you your lunch if you’re in any way sensitive in the inner-ear department. One involves being scooped up and spun around by a giant waterwheel, while another sees you sliding at speed through a sequence of sewer drains. It’s dramatic stuff, if you can handle it. Nonetheless, I had a lot of fun with Boneworks. It’s a great VR showcase, even if it does occasionally collapse in a puddle of its own limbs. More than that though, it demonstrates that VR can be enjoyed over a longer stretch of time, that you can build these systems into a consistent game experience and they will still be enjoyable. If you’re looking for a game to prep you going into Half-Life: Alyx, Boneworks is probably it.