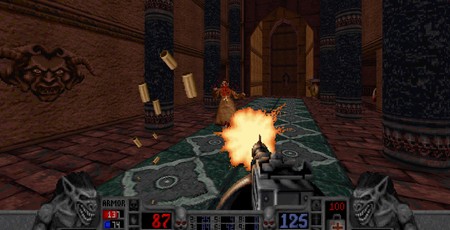 I’ve never played Blood before. There are a few reasons for this. Blood arrived as shooters were transitioning to full 3D, and I was far more interested in those games than the tail-end of the 2.5D FPS window. This naturally led me to play Blood 2, which was utterly awful and put me off playing the first one. This probably sounds stupid, but bear in mind I would have been about 10 years old at the time, meaning that A) I was stupid, and B) I shouldn’t have been playing any of these games anyway. Then as I got older I heard from several people that Blood is amazing and anyone even remotely interested in shooters should play it. But in the tsunami of modern game releases, it’s hard to justify going back to any game older than a few weeks, let alone a 22-year-old FPS. Fortunately, Nightdive Studios (the folks working on the System Shock remake) very kindly released Blood: Fresh Supply this month, a remastered version of the FPS that provides the perfect excuse to tick this classic off my bucket list.

Let’s talk about the remaster itself first. Blood: Fresh Supply offers the complete Blood experience (or should that be blood-pack?), including the first four episodes of the original game, plus the two expansions. It also provides an extensive overhaul of the game’s visuals and code, to the point where the game is actually running on a whole new engine – Nightdive’s KEX engine, replacing the Build engine that served as the foundation for the original. Unless you’re a Blood fanatic, you probably won’t notice this. But you are more likely to notice the added support for more modern graphics options. This includes anti-aliasing, ambient occlusion, v-sync, and resolutions up to 4K UHD. Nightdive has also completely rewritten the game’s netcode to enable full multiplayer support on modern PCs, including cooperative modes and split-screen. You can even play the game on a pad if you like, you rogue.

But what does this mean for the experience of playing Blood? Having not played the original, it’s impossible for me to compare, but nothing obvious stood out to me as being poorly thought out. That said, I did a little research, and it seems some more enthusiastic Blood fans are not happy with the Fresh Supply remaster. The Blood Wiki (which is astonishingly detailed) claims that the transition to the KEX engine has resulted in 'sound and graphical issues, off physics and balancing, and odd enemy and entity behaviours' which were not present in the original or previous modernisations. Nightdive is aware of some of these issues and is working to patch them out. Overall though, I don’t think they’re likely to massively affect your experience unless you’re a die-hard Blood fan.

As for the game itself, yeah, all those Blood advocates were absolutely right. For the uninitiated, Blood places you in the role of Caleb, one of the Chosen followers of the demon Tchernobog. Big Tcherny starts the game by disavowing all his followers, abducting Caleb’s lover, and brutally murdering Caleb. As with any good FPS protagonist, however, being killed is little more than an inconvenience to Caleb, who promptly rises from his grave to seek vengeance upon his former master. What immediately struck me about Blood is just how violent it is. I know you’re probably thinking, 'Er, did you not read the title, Rick, you absolute lemon?' But here’s the thing. Most of the old virtual nasties look downright quaint compared to modern games. 1993’s Doom, for example, is nowhere near as grisly as 2016’s Doom.

Blood, by comparison, is still impressively nasty, from the fact that you can kick enemies’ decapitated heads around, to the way a cultist’s skin sloughs off their body when you shoot them with a flare. Monolith’s commitment to animating multiple grisly enemy deaths for different weapons is grimly admirable, and it makes Blood the most imaginatively violent of the 2.5D shooters (although Shadow Warrior comes close). But Blood’s imagination extends way beyond the violence. The weapon selection is also arguably the most colourful of any mid-90s FPS. The first weapons you pick up are pitchfork, a flare-gun, and a stick of dynamite, each of which functions in a very different way. Later on, you can wield an aerosol can, a devastating napalm launcher, and even a tesla cannon. The shotgun sucks, but everything else is satisfying to wield. Most weapons sport an alt-fire too, which may be the first instance of alt-fires in any FPS. I can’t find any hard confirmation of that, however. Answers on a postcard, please.

Most importantly, Blood puts a big red tick in the box marked 'great level design'. It starts out slowly, but levels soon expand into complex mazes chock full of secrets and a surprising amount of destructibility. Dark Carnival seems to be the one that most fans recall – a delightfully daft level set in an amusement park, featuring extensive interactivity and plentiful quips from Caleb. But there are loads of other highlights in later episodes, including a wonderful play on The Shining’s Overlook Hotel. I also enjoyed the game’s pitch-black humour. Caleb is openly a villain, just a slightly less evil one than the people he’s fighting, and his creepy singsong voice makes his grim jokes far more effective than the dumb-one-liners of Duke Nukem or the racist humour of Shadow Warrior. The Thing-like hands which squeal, 'I’ll swallow your soul!' in a reference to The Evil Dead are particularly great, albeit annoying to fight.

The only other point I should mention is that, if you haven’t played Blood before, you should stick to the two easiest difficulties. Blood is a tough game on normal, particularly in the early stages. Moreover, taking into consideration all the expansion packs, it’s a pretty long game, and you don’t’ want to be stuck on the first few levels of a shooter that’s two decades old. If, like me, you haven’t played Blood, however, I’d definitely recommend it. The action holds up remarkably well, and although Nightdive’s remaster has its critics in some corners, you can at least boot up and play the game without having to mess around with anything.