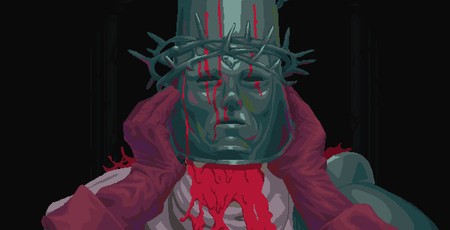 It’s been a while since I saw a game commit to its aesthetic quite as powerfully as Blasphemous – a 20-hour long literal guilt trip that takes the darker formalisms of the Catholic faith and wrings them in its hands until the blood drips out. In Blasphemous’ dark realm of Cvstodia, if you don’t get busy pushing needles into your palms, someone else is going to do it for you. Or to be more precise, you’re going to do it to someone else.

In many ways, Cvstodia is a more apt setting for a Dark Souls-inspired game than Souls’ own decaying fantasy world. It’s a place where the characters view punishment the same way a dog views a raw T-bone steak. It’s a bold, shocking, brilliantly stylish game, which makes it all the stranger that Blasphemous’ idolising of self-flagellation doesn’t entirely translate to the act of play. Blasphemous places you beneath the pointy helmet of the Penitent One, raised from death to cleanse Cvstodia of its sins by a deity that calls itself the Miracle. Specifically, you need to seek out and destroy three key figures who dwell in the farthest reaches of the world. Getting to these locations requires you to explore both the darkest depths and most treacherous heights of Cvstodia, facing all manner of terrible foe along the way.

Blasphemous shares DNA with From Software’s masterpiece not just in aesthetic but in level design. You’ll delve into stony crypts, poisoned cisterns, and the upturned hollow of a gigantic bell named Jondo. Developer The Game Kitchen is based in Seville, and that heritage is reflected in many of the game’s environments, from the dusty starting village of Abero to the ostentatious Gothic architecture that is a hallmark of Spanish Catholicism. Along the way you’ll unlock elevators and portals that provide shortcuts back to Abero, gradually tying the game together Despite being relatively compact, Blasphemous’ world has an impressive sense of both range and depth. The true stars of Blasphemous’ sacrilegious show, however, are not the environments but the creatures who inhabit them. Each is a grotesque triumph of pixel-artistry, from the hooded skeletons who charge at you with long candelabras to the bishop who floats above your head on a chair, stabbing down at you with a long spear. Some of the enemy designs make you feel like killing them is more of a mercy than a punishment, such as the women (at least, I think they’re women) bound to stone crosses, who drag themselves painfully around the environment, lunging at you as you draw near.

Visually, Blasphemous is rarely less than striking. Mechanically, however, Blasphemous is less interesting. Combat adopts a Souls-like blend of attacks, timed blocks, and dodges, the latter of which lets you pass through an enemy during their attack. As you progress, you unlock a wider range of moves, such as a charged attack and a powerful lunging stab. Accompanying these are a variety of upgrade and enhancement trees, such as a Rosary that you can fill with minor buffs and special moves like an ability that speeds up your attacks. In theory, the system is sound. However, it suffers from several issues. Most enemies only have one attack, which means that combat is always a case of waiting for that attack, blocking and/or dodging it, then laying into them until the next attack comes. They’re not capable of surprising or deceiving you in the way that Souls’ or particularly Sekiro’s enemies are. Moreover, Blasphemous features a lot of irritating floating enemies who you can only kill by chipping away at their health with jump attacks, which makes you feel less like a master swordsman and more like a flea with one really long tooth.

My biggest issue, however, is that most of Blasphemous’ challenge comes not from the opponents you encounter but from annoying, tricky jumping puzzles. This is particularly the case in the mountainous area, which involves flighting hovering, Grim-Reaper like enemies while perched on narrow ledges as the wind attempts to blow you off the mountainside. It’s one thing to be killed by a giant golem with a sword twice the size of your entire body, quite another to be killed because you slightly mis-timed a jump (oh, how hard can it be? - ed.). I will admit that I made the mistake of approaching this area first and perhaps would’ve had an easier time of it had I gone in this direction later in the game. Nonetheless, from a play perspective, Blasphemous is somewhat less captivating than its arresting visuals. There are a couple of other flaws too. While the soundtrack is excellent, the voice-acting is comparatively flat. In addition, although the game is playable on keyboard and mouse, it’s definitely not designed for it. Menus can only be navigated by keyboard, and I couldn’t scroll down on item descriptions, meaning I could never find out what half of them did, and missed out on a fair bit of lore in the process.

Because of these problems, I didn’t enjoy Blasphemous as much as I expected to. That being said, every time I began to lose interest in the game, it would throw something my way that hooked me back in. It might have been a new area, or a neat shortcut that linked two distant areas together. In many cases it was the bosses, such as the Leshen-like Ten Piedad, or Our Lady of the Charred Visage, whose torrent of energy balls can be batted back at her with your blade. And these aren’t even the best examples. With a proper variety of attacks as well as remarkable visual design, the bosses represent Blasphemous at its best and are what nudge me into giving it a recommendation. One could easily argue the game behind the art isn’t all it could be, but I prefer to think that the art elevates what would otherwise be a rote action-platformer into something just a little bit special.