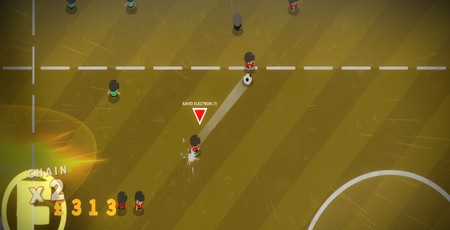 SCENE OPENS: A loud, obnoxious trumpet fanfare plays over a video montage of men playing football games. Some play alone, some play with friends. Mostly, they play alone. When the fanfare dies down like a herd of drowning elephants, the scene then cuts to a television studio where a camera zooms in on a smartly dressed, lightly bearded man sat behind a desk for some reason.

Gary Linkslater: Good evening! And welcome to Patch of the Day, your weekly roundup of all the football video game news! I'm Gary Linkslater, and we've got quite a special show lined up for you today. We have extended coverage of the latest round of FIFA versus PES, also known as the most pointless rivalry in video games. Plus we've got highlights of all this week's action from Rocket League, Football Manager, and, erm, all those other football games that humans play on their computers. Is there a Mario football? Probably. Maybe we'll show some of that. But our first game tonight is new on the scene, and it's quite a fascinating entrant at that. Behold the Kickmen is a football game designed by a man who doesn't know or even care that much about football. Clearly it's meant to be some sort of joke. But is it a funny joke? Or is it the kind of joke that causes people to gasp and post angry messages in large numbers on social media, thus causing the joke's originator to leap from a cliff in what is later viewed as a horrific and easily avoided tragedy? Let's find out. Commentary from Andy Scores and Mark Boringson.

The scene changes, showing a bird's-eye view of a football pitch. An overlaid image of the Behold the Kickmen box-art spins onto the screen. The commentary begins.

Andy Scores: It's a big day in the world of football gaming, because a football game has been released that isn't either FIFA or PES or Football Manager. Do people actually say 'PES', Mark, or do they say 'Pro Evolution Soccer' as is the correct term for that particular virtual football experience? Andy: Thanks, Mark! And it's not just any old football game that we're covering today. Behold the Kickmen is a football game that gently mocks the worldwide obsession with men kicking a ball around a large field of grass. What do you think of that, Mark?

Mark: I think it's disgusting. An affront to the beloved institution that is football, the sport of Kings. Mark: Oh, I don't know, Andy. You know I'm only here for my enormous pay-cheque. Why else would I be sat out here in a cold stadium filled with noisy football fans as we participate in a video game review?

Andy: It is quite a confusing situation, isn't it? I mean, why are we reporting from a football stadium at all? Is the video-game actually going to play football itself? And if so, who with? Minecraft? I feel like this hasn't been especially well thought out.

Mark: It probably seemed like a good idea at the time, Andy, before turning out to be really time-consuming when the reviewer could have just rattled off 1000 words and then gone to watch Dunkirk.

Andy: I haven't heard of Dunkirk, where do they play? Andy: Well, you learn something new every day from the game of football. Speaking of which, I think we're on the verge of kicking-off here. Now, Behold the Kickmen has a curious interpretation of football's most fundamental ideas, doesn't it Mark?

Mark: It's a little like Sensible Soccer, except it's all gone a bit wrong.

Andy: Exactly, it plays from a top-down perspective with cartoonish, bobble-headed players. Like true football, you need to get the ball into the other team's goal, using a combination of skills like passing, shooting, sprinting, and a kind-of-sideways dodge that I guess is meant to represent a dummy?

Mark: The basics are recognisably football but simplified. There are no corners or throw-ins. Some of the other rules are different too. 'Offside' is an event that randomly triggers where if a player has the ball in a certain area of the pitch at a certain time, they automatically get sent off. In short, Behold the Kickmen deliberately tweaks the rules of football for the sake of humour and surprise. Andy: And what do you think of the humour, Mark?

Mark: Well, if it wasn't for the fact that it was desecrating the sacred, holy, pure essence of football, I would say it is quite amusing. Instead of 'scoring' a goal, you 'do' a goal, and half-time is referred to as 'The First Division'. These jokes admittedly wear thin after a while, but there are many other humorous elements to beholding these Kickmen. For example, the Kickmen names are randomly generated, as are the names of the football teams you play against in the game's story mode. Some of these, such as 'Wasptown United', elicited a chuckle even from my ice-cold football heart.

Andy: Ah, yes, take us through the story mode, Mark.

Mark: You do it, Andy. I just did a big paragraph, and now I'm tired. Andy: All right, the story mode sees you take your team right from the bottom of the Premiere League (which, in a witty inversion to actual football, is the lowest league of all) to challenging the mighty 'Brazil United' at the top of the Champion League. Each game of football is interspersed with a choose-your-own adventure story where your star striker squares off against bitter rival Pedro Brutus and tries to uncover the mysterious demise of his father, who was a legendary Kickman in his own right. It is extremely silly but does a good job in breaking up the endless football, and the jokes make you want to keep reading and see what happens next.

Mark: You can also earn cash in matches by doing lots of passes and tackles, which can be used to upgrade your team's abilities, although it's difficult to tell how much of an effect this has. It's also worth noting that the leagues don't actually work much like leagues. Instead, you progress up a league by beating the team directly above you, so they act more like a series of levels. Annoyingly, if you lose a match you slide back down the league, which means you have to replay the same teams over and over.

Andy: That's a good criticism there, Mark. On the plus side, I like the presentation. Kickmen may be a silly and simple game about football, but it looks very pretty, unlike most footballers. There are some delightful weather effects, while the UI is stylish too. It also feels good to play beneath the fingers. There are a couple of neat little mechanics where you have to 'charge up' tackles and shots, and the passing system makes smart use of the analogue stick, drawing a line automatically between players as you point the stick toward them. Mark: It sounds great too, from the pulsing musical score to the silly football chants such as 'Kick the ball into the goal!' There are a few other touches I particularly like, such as the burst of confetti that happens when you score and the way the referee runs up and gives the scoring player a little kiss. I love that.

Andy: I didn't think you'd be into that sort of thing, Mark.

Mark: You shouldn't judge a book by its cover, Andy. But returning to the topic of Kickmen, there are a few deeper problems alongside those I already mentioned.

Andy: Yes. I have to confess, both the running and the shooting are curiously slow. Moreover, the difficulty of matches swings wildly between too easy and too difficult. I reckon this has something to do with the AI. They can easily dominate the game if they get hold of the ball, passing it around like a pinball. But once you get to grips with the tackling, it's very easy to avoid this. Also, the goalkeepers are terrible, so there's a high chance of both sides scoring if they get a shot on goal. Mark: I think its problems go deeper than that, too. It doesn't go far enough in either side of its personality. As a straightforward football game it's fun in short bursts, but there's not enough depth or variety to how matches play out to keep you entertained over a longer period of time. Meanwhile, as a send up of football, it's funny, but I'd like to see it go further and bake more of the humour into the game. You could include all kinds of escalating mechanics that transform its simple football pastiche into something completely ridiculous. You can unlock a mode that leans more in this direction, but you have to win the league in order to do so.

Mark: That's not what I said. Stop putting words in my mouth, Andy. There are only two things I like in my mouth. One is Pukka Pies, and the other I'm not allowed to mention until after nine o'clock. What I mean is, there are both better football games and better comedy games out there. Yet while I think Kickmen could do more in both categories, there's enough here for people to enjoy anyway, especially considering the price-tag. It costs less than three pounds, Andy. You'd have to pay ten times that much to go to a real football game. And then you'd have to sit outside in the rain like some sort of idiot. Andy: Would you say, then, that Behold the Kickmen is better than real football?

Mark: I would never say that. Nothing is better than real football. Not even things like daylight and breathing. But I would say that Behold the Kickmen is definitely better than sitting outside in the rain watching other people play football. And if that isn't a box-quote to be proud of, well, I'm not sure what is.

Andy: Thanks for that, Mark. By the way, did kick-off actually happen or not?

Mark: I think we conveniently forgot about that thread a long time ago, Andy. Anyway, back to the studio with you, Gary. The Patch of the Day logo swipes across the screen, and the scene returns to the studio, where Gary Linkslater sits, looking slightly bemused.

Gary: I don't know why Mark said that, since that was a recording and not live. But I'm afraid that's all we've got time for this week, because that went on far longer than any of us expected or indeed desired. Tune in next time for, oh I dunno, Grand Theft Football or some other nonsense. Cheerio!

The obnoxious trumpet-fanfare kicks up again, as the camera pulls away from Gary Linkslater's grinning face. His cheerful features collapse momentarily before the screen cuts to black.