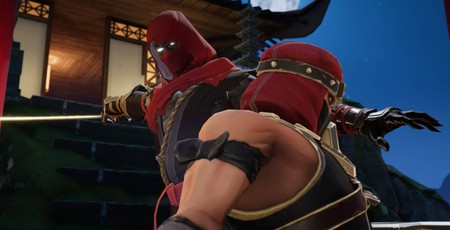 In some ways Aragami 2 is a better game than its predecessor. In others, it's worse. And in a few ways, it's barely a sequel to Aragami at all. It's one of those games that isn't especially great, but is fascinating from a critical perspective. I can't help but wonder how developer Lince Works ended up making something so different from the previous game. 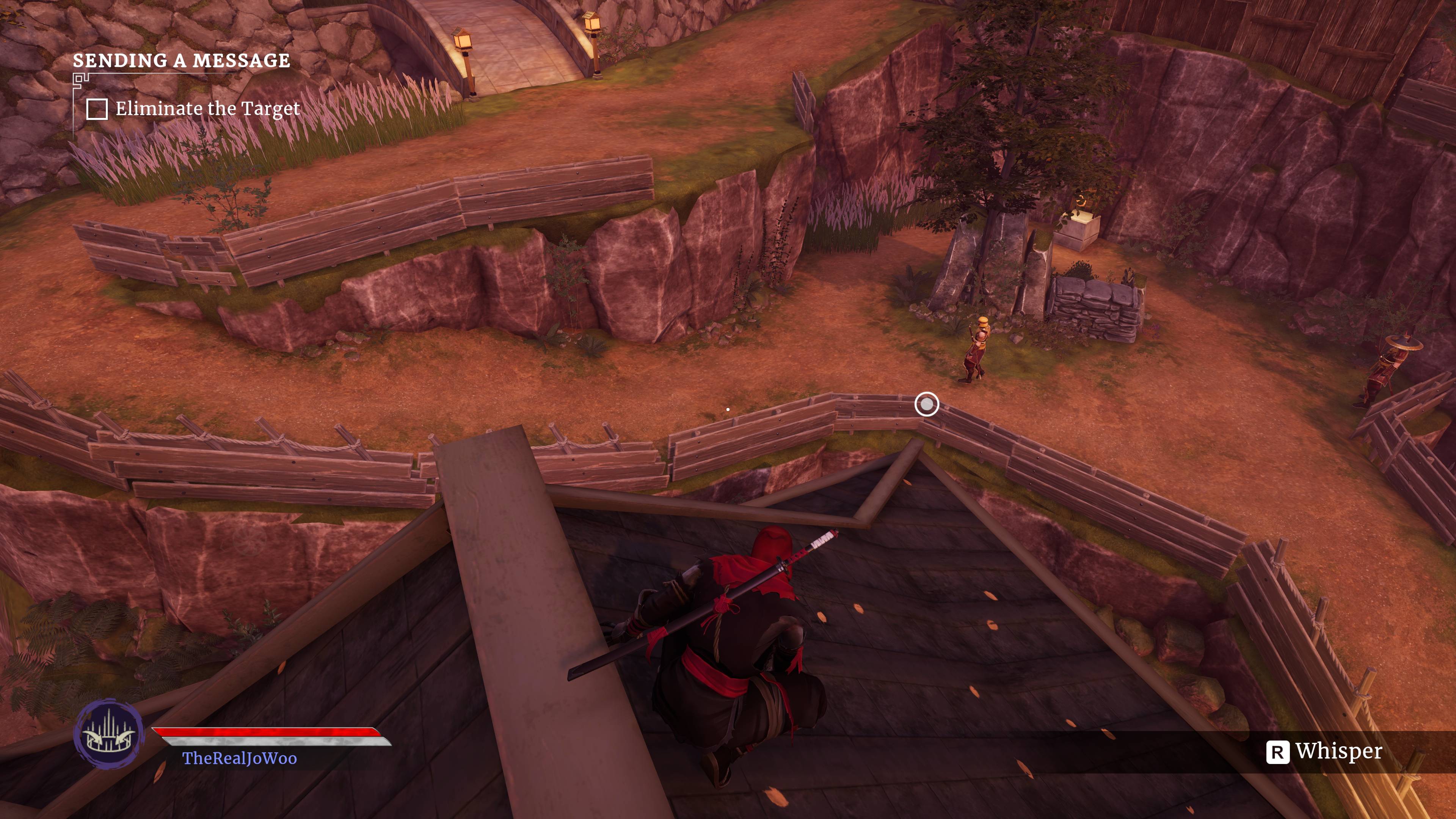 The word 'different' is highly contextual, of course. Aragami 2 isn't a kart racer. It's still a stealth game in which you play a supernatural ninja. But the story, structure and core mechanics have all been fundamentally changed, with results more mixed than a blender full of liquorice all-sorts.

Aragami 2 sees the friendly neighbourhood vengeful spirit whisked away to the secluded Rashomon Valley (don't try asking for directions, you'll never get a straight answer), arriving in an idyllic village whose inhabitants are afflicted with the same curse as our nameless anti-hero. The leader of the village wants your help in lifting the curse, while also taking the fight to the ruthless Akatsuchi clan, who have malicious designs on the village and its people. 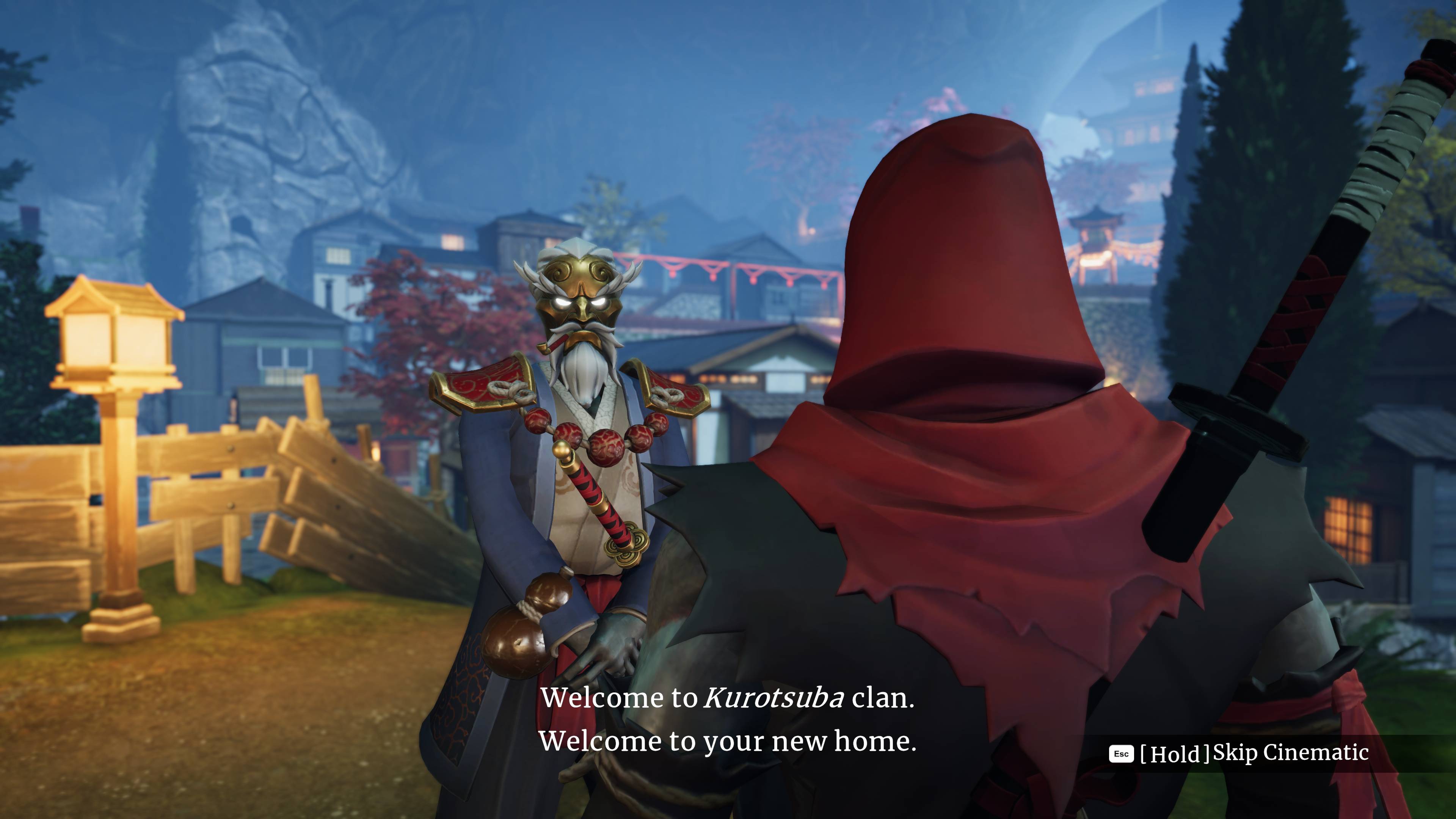 The story is largely passive, existing mostly to lend context to your objectives, a loose framework for a dozen hours of sneaking and stabbing. In service to this, Aragami 2 performs a mechanical transplant over the first game, which revolved heavily around shadows. Not only was your ghostly ninja much harder to spot in the shade, they could also perform a 'Shadow Leap' effectively teleporting from one shadow to another without being spotted.

That mechanic is gone from Aragami 2. The ability to hide in shadows still exists, but Aragami 2's Shadow Leap' instead lets you teleport to ledges from the ground. This is part of a larger overhaul to the game's movement mechanics that makes your ninja much more agile better able to utilise verticality. You can sprint, jump, double-jump, and perform a short-range dash, briefly turning your character invisible. 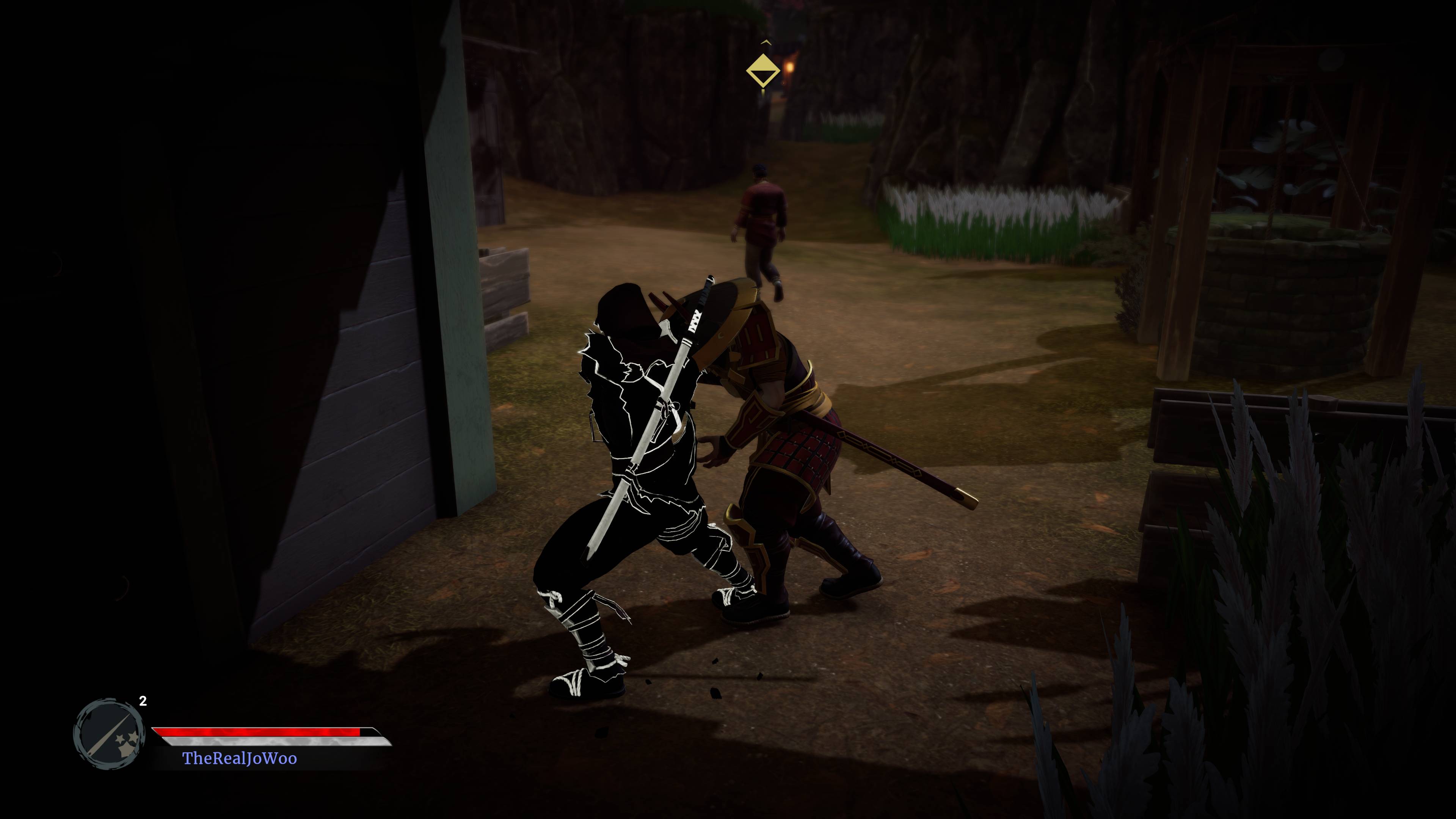 While I miss the original's more unusual Shadow Leap, I can't deny that the movement in Aragami 2 feels great. Unusually for a stealth game, you can traverse the environment extremely quickly, combining your various movement abilities to cross whole levels within minutes. You really do feel like a ninja, dashing silently across rooftops, shadow-leaping onto guard towers, and dropping down from fortress walls into whispery shoulder-high grass.

As you progress through the game, your abilities and equipment-roster expand, among which are some fun little upgrades and tools. One ability turns you invisible when pressed against a wall, while another turns you invisible when hanging from a ledge. These let you be more daring in your pathfinding, threading your way through tightly knit guard patrols with quick, precise movements. To this end, one of my favourite tools is the 'Amnesia Dart', which briefly stuns opponents, letting you saunter right past them without them remembering your presence. 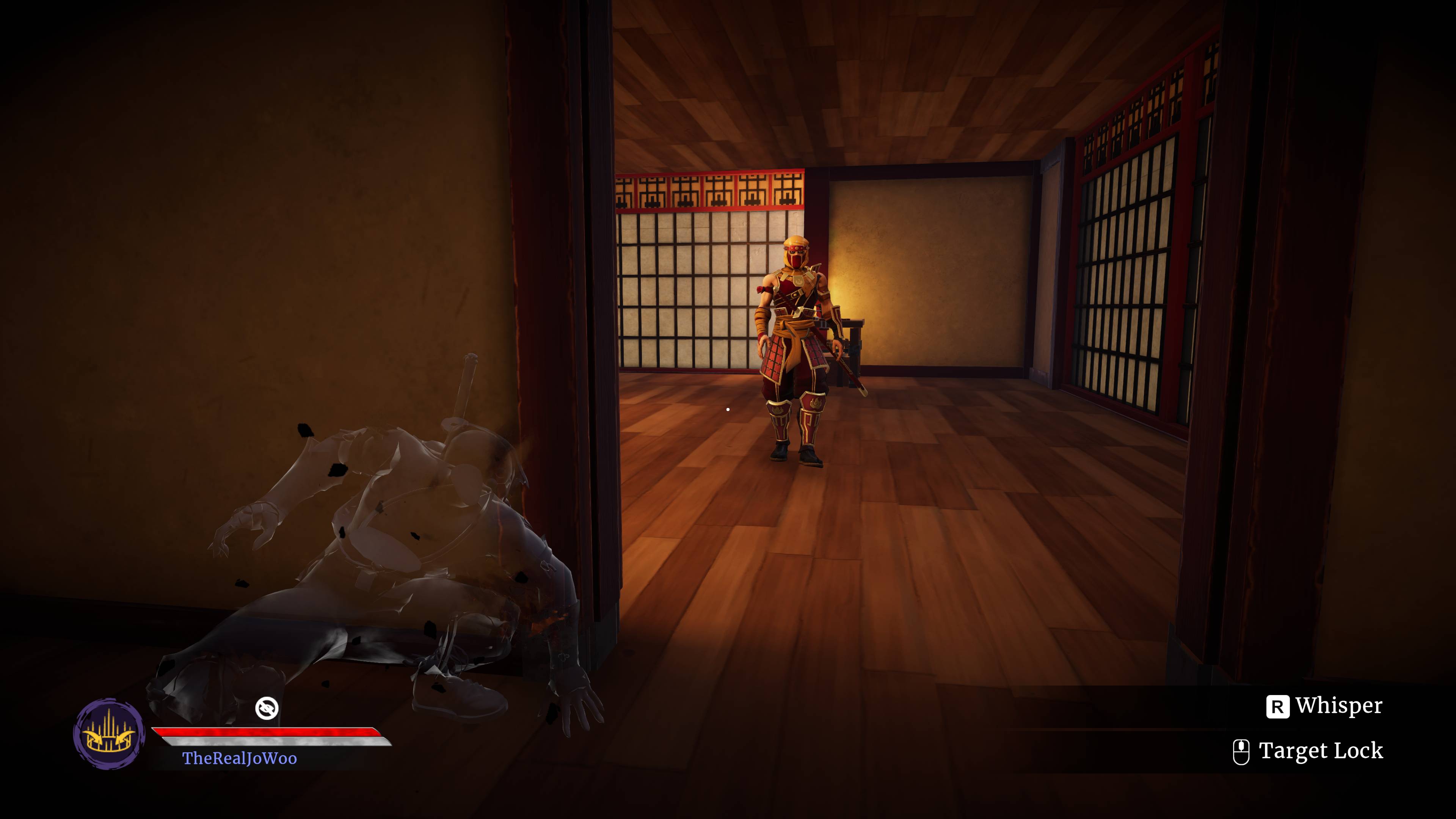 Although I always tried to complete levels without being spotted, your Aragami doesn't have to be entirely passive. You can dispatch guards quietly, either knocking them senseless with a swift kick to the stomach, or killing them outright with your katana. The latter of these is spectacularly brutal, coating the ground in pools of arterial spray that, frankly, shouldn't go unnoticed by other passing guards.

If your presence is detected, you have two options, run or fight. I tended to choose the former, because combat is one of Aragami 2's weaker elements. The system borrows heavily from Sekiro: Shadows Die Twice, with an emphasis on countering enemy attacks to open them up for a single, killing strike. While the combat looks impressive, with great animations and a weighty feel to your blows, the system lacks both the slickness and precision of Sekiro. Timing your counters is difficult, while fighting multiple enemies is almost impossible. Also, if you die, you're catapulted back to the start of the level, which means combat simply isn't worth the risk when evasion is more effective. 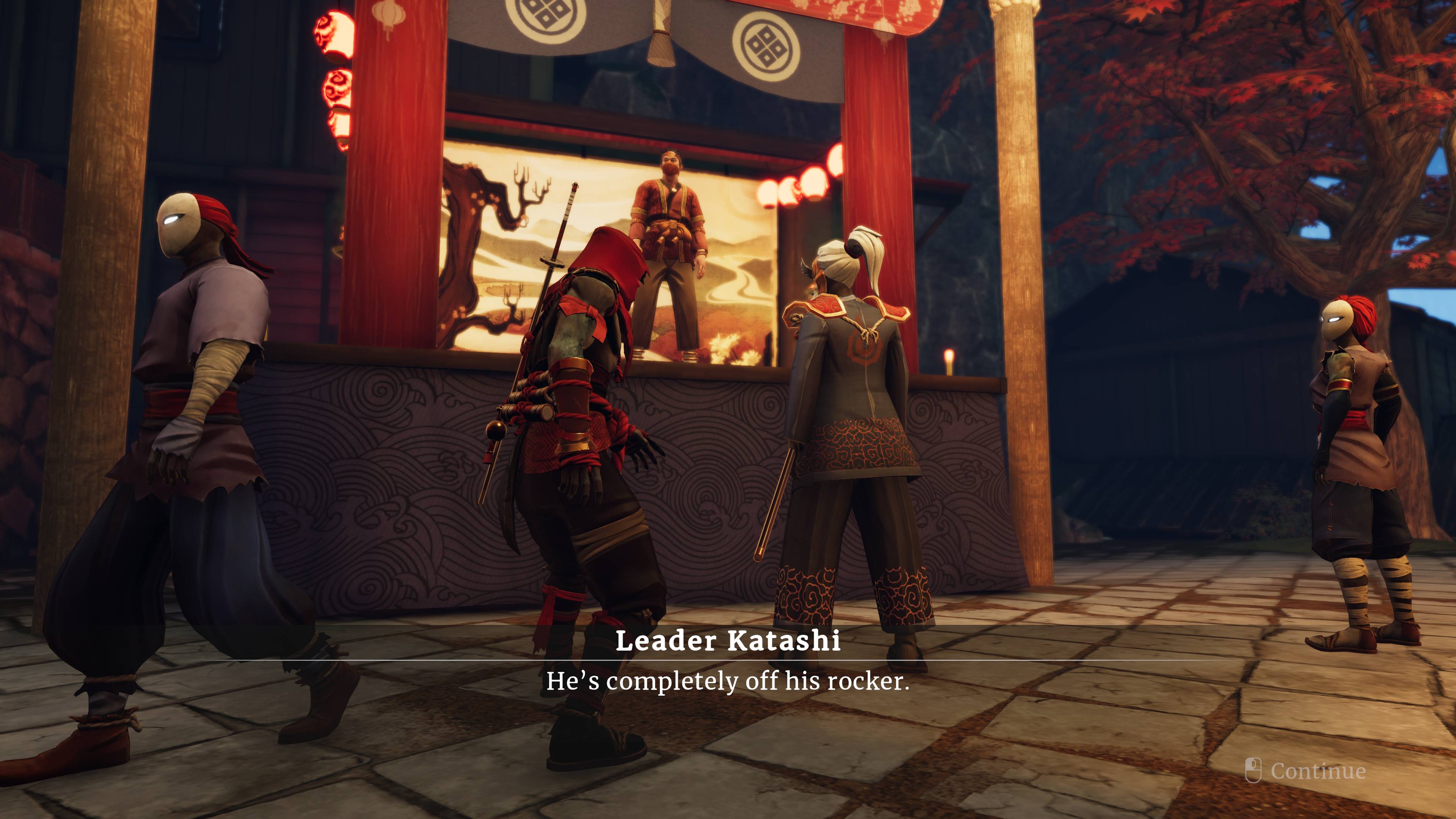 Although combat is underwhelming, it isn't Aragami 2's biggest problem. That would be the new structure. Instead of a straightforward linear campaign, Aragami 2 sees you taking on missions from a noticeboard in the central village hub. Many of these missions involve repeatedly visiting the same locations, often multiple times within the same chapter.

In itself, this isn't a problem. Deathloop is entirely about revisiting locations, and that's one of the best games released this year. The problem is that Aragami's levels are not that interesting to revisit. While large and geometrically complex, they're also empty, lifeless spaces laid out in a very formatted way. Combined with perfunctory objectives that are all 'Kill four guys' or 'Scout three areas', this makes the levels feel samey, despite the best efforts of Lince Works' environment artists. 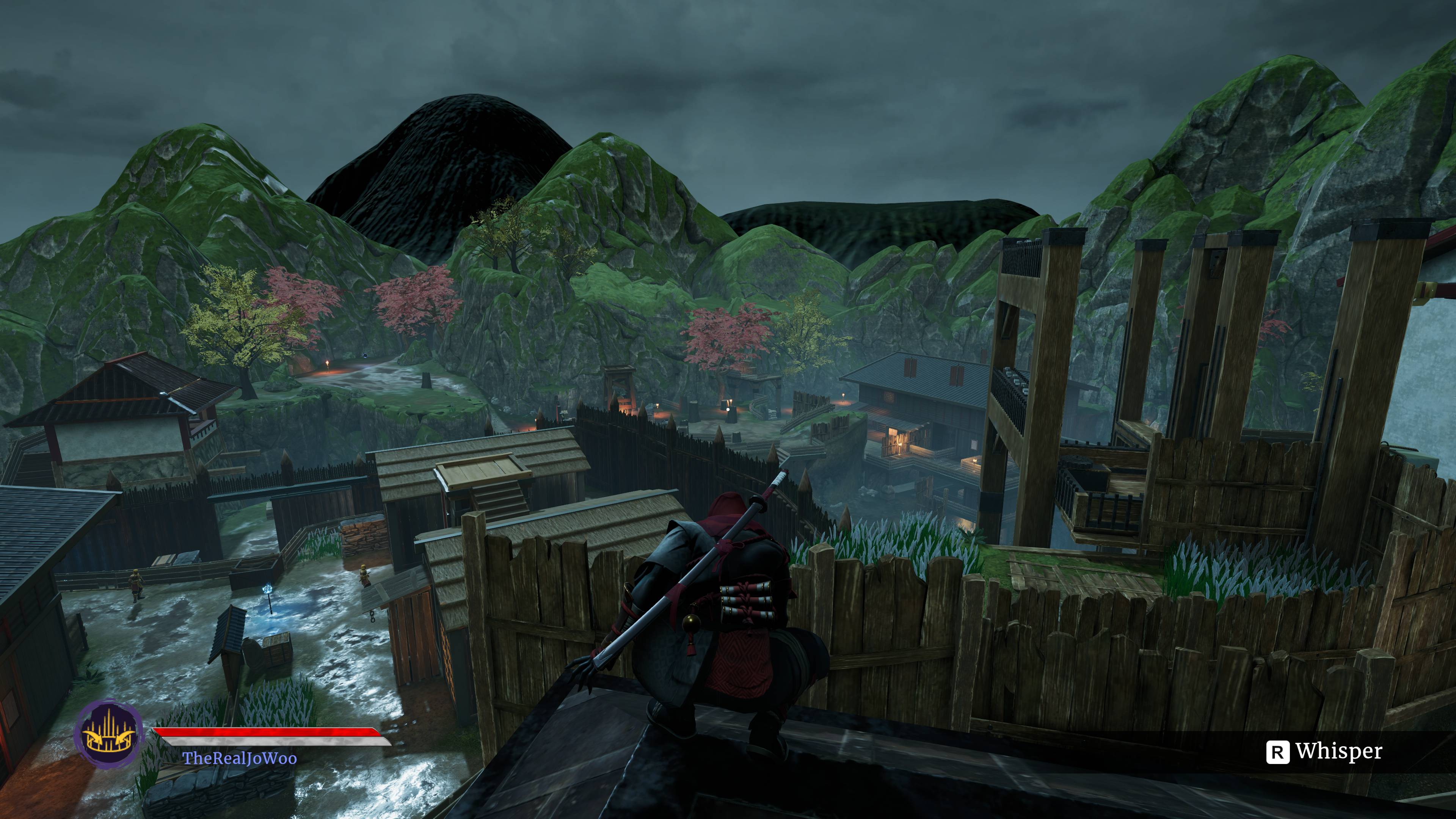 Consequently, repetition sets in quickly. That said, the monotony can be alleviated by playing in co-op, adding one or even two extra ninjas into the proceedings. Co-op doesn't necessarily make Aragami 2 better, however, as increasing the number of ninjas also increases the likelihood of those ninjas being spotted. If you work together as a well-oiled machine, synchronising takedowns and helping each other out, then it's good fun. But if you or your partner plays like a piano falling down the stairs, then co-op makes the experience worse.

Aragami 2 is enjoyable enough in half-hour bursts, but the highly formatted nature of it makes it difficult to maintain interest for much longer. In some ways, this might be ideal for a multiplayer game, but as someone who mainly plays single-player, I was hoping for an experience more tailored and less grindy. I admire its quickfire stealth systems however, and while I can't quite recommend Aragami 2 outright, it an interesting example of how to do fast-paced stealth that still feels sneaky. 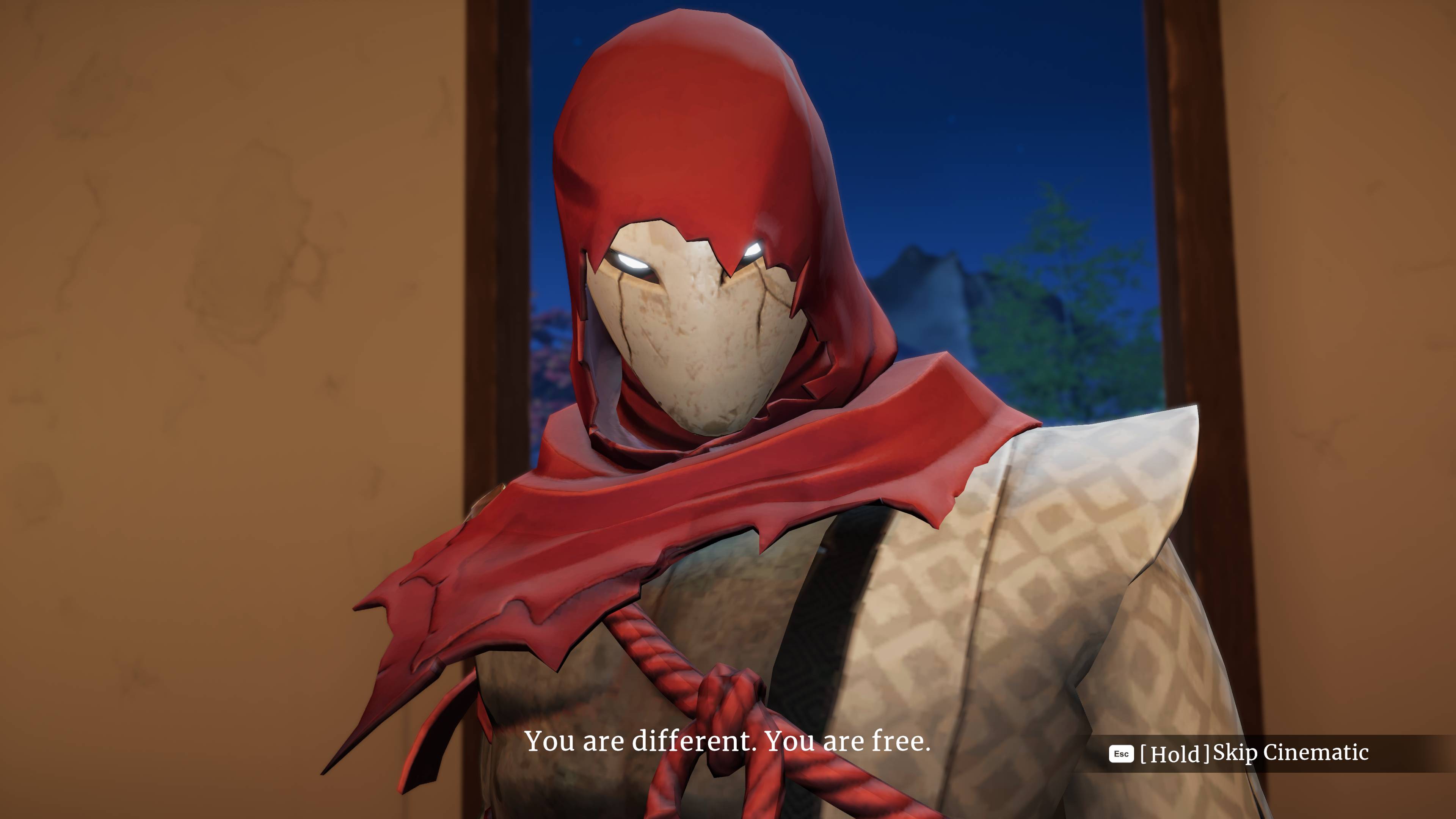