"Well, this is the slowest elevator in the universe," Starlord mutters, dejected after delivering a speech telling the Guardians of the Galaxy it was time to be heroes, only to be let down by an elevator moving at a crawl down the shaft.

Drax looks up, angry now. "You cannot possibly know that," he barks, angered by my overconfidence that this is, in fact, the slowest elevator in the universe. There are many moments in Marvel's Guardians of the Galaxy: The Telltale series - Episode 1 that evoke feelings of the film although with your team of Guardians all looking a little different to their movie counterparts, here inhabiting the type of video-game universe that switches Bradley Cooper's Rocket Racoon for one voiced by Nolan North. This first episode feels like weaponised fan service but, I realised high-fiving Rocket Racoon early in the game, I didn't mind it too much, mostly enjoying the experience.

The soundtrack takes team-leader Starlord's love of 80's music and expands to fill the game, with licensed music providing several of the emotional punches within. The quality of the soundtrack can't match the film, but it comes pretty close. Chapter titles and achievements are both named after songs from the era, with an early achievement entitled 'Appetite for Destruction'. Performances and characterisation are particularly strong, despite lacking the outfit's 'real' voices, and it feels like there's a real chemistry between the leading group, something that's played with a lot as the story shows a team under pressure and starting to fall apart, bickering as they fight through several menaces. Seeing relationships between our central space-adventurers start to sour is jarring, but fits the tone of the story Telltale seem to be building, and allows them to slot in a "Drax will remember that" along the top of the screen.

It all comes together to create an enjoyable romp that's both more fun than Batman, Telltale's most recent licensed effort, while also managing to produce a fresher experience, despite reusing what feels like the same engine and the same bag of tricks to try and make us believe we're playing an action game. This is Marvel's Guardians of the Galaxy: The Telltale Series - Episode 1's most heinous crime, trying to hide the fact we're playing a narrative adventure in Telltale's ageing engine by having us mash keys to avoid obstacles, shoot enemies or even walk forwards. It never quite devolves to full quick-time punch-ups like in Telltale's Batman, but one early fight does come close and feels worse for it.

A lot of these abilities play on strengths of the characters. You'll mostly be playing as Peter Quill, Starlord, for the length of the episode, inhabiting other characters occasionally to do a quick-time event or two. While playing as Starlord, you'll explore multiple levels of a map with smart use of his jetpack-boots — probably not the right title for them, but you get the idea — explore time using a handy sci-fi gadget to solve a mystery, and communicate with other players at any point using a communicator integrated into your helmet. The game builds on many of the ideas from previous Telltale games, and it's clear how far the games have come since we were guiding Lee around settlements chatting to people and braining zombies back in 2012. 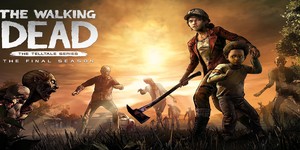