While the setup of the early game is intriguing, during play Gears of War 4 initially lacks a spark. Well, actually, there are plenty of sparks, courtesy of the new, introductory enemy type – robots! Known as 'DeeBee' units, they simply aren’t that much fun to fight. The basic soldier units are slow and dull, while the spinning ball droids that roll around the battlefield before planting themselves near you like a proximity mine are just annoying. The construction site is also by far the game’s most underwhelming level, its clean lines and barren interiors sitting in stark contrast to the foliage-strewn ruins and colossal industrial machinery of later chapters. The only saving grace of the DeeBee units are their weapons, such as the brilliant 'Embar' rifle, a slow-charging railgun that cracks like a whip when fired. Indeed, the combat in general is both slicker and punchier than before, and boasts a few new mechanics such as the ability to reach over cover and pull an enemy to your side, so you can finish them off with a quick melee execution.

But what really retained my interest in these early stages is the game’s tone. Gears of War 4 has a much lighter and wittier script than previous entries. JD’s squad are both more fun and more fleshed out than his father’s ever was. They constantly crack wise, chat with one another and make interesting observations about the environment. This only gets better when Marcus himself joins in the fun. His grizzled, grouchy persona is a great counterpoint to the youthful optimism of JD and his friends. The Uncharted inspirations reveal themselves in some of the game’s set-pieces too. A particular highlight is the mission set in the Fenix estate, which finds itself under assault by hundreds of DeeBee units. What follows is a rip-roaring second act, featuring a gunship bristling with missiles, lightning-wreathed tornadoes named 'Windflares', a whole lot of crumbling masonry, and Marcus yelling about the destruction of his tomato plants (because of course Marcus Fenix grows tomato plants). It’s absurd in all the right ways, and one of the highlights of the campaign.

Around the halfway mark, however, the situation reverses itself. The combat becomes far more interesting, but the plot loses nearly all of its momentum. The story moves away from the ideas introduced in the first couple of hours, transforming into a straightforward rescue mission which leads to the SHOCKING reveal that the Locust are, in fact, not dead. Instead, they’ve evolved into a new (albeit highly similar) form of Locust called the Swarm. The Swarm are far more enjoyable opponents than the DeeBee units of the campaign’s first half, with both a wider range of enemy types (including new arrivals such as the cat-like Pouncer and the fearsome Snatcher), and an expanded weapon roster. Of these, the Buzzkill is easily the best, a table-top sized rectangle that fires spinning buzzsaws at an ever-increasing rate. Others such as the Dropshot are fun in theory but difficult to wield in practice.

Battling the Locust is as brutal, bloody, and entertaining as it ever was, but something is definitely lost when Gears of War reverts to type. Primarily, the tone fails to adjust to the added drama of the third act. The Gears’ react to the Locust’s return as if they’ve just received notification of an unexpected bill, and the jocular tone undermines the sense of threat that the Locust should have. The story lurches haphazardly onward in a less and less interesting direction, briefly spiking with a neat change of pace before concluding with an infuriating non-ending. It’s frustrating because the combat is great, but the stakes simply don’t feel all that high. Away from the campaign, the multiplayer is a fun but fairly conservative follow-on from Gears of War 3. The most significant change is to Horde mode, which uses the Fabricator introduced in the campaign as a mobile crafting table. Before a match starts, players can carry the Fabricator to wherever on the map they wish to defend, then use points plucked from the corpses of enemies to build fortifications, gun-turrets and new weapons. It’s a great way to encourage creative use of the maps and helps to emphasise that feeling of being under assault from a seemingly unstoppable force.

On the competitive side, new additions include Dodgeball mode and the delightfully bonkers Escalation. The former implements a system whereby killing an enemy enables a member of your team to respawn, which produces some fascinating back-and-forth plays. Meanwhile, Escalation equips players with increasingly powerful weapons for the more kills each side gets. I’m sure you can imagine the effects of this in the latter part of match. Fun as these twists are, however, there’s nothing radical here that’s likely to challenge PC stalwarts like Counter Strike, although the cover-based combat means Gears may be more welcoming to newcomers than the twitchier shooters available. All told, I feel that Gears 4 is a fun and robust revival that’s just a little too cautious to be a true great. The incremental innovations to the multiplayer, and the way the single-player experiments with new ideas before returning to familiar Gears territory, all speak of a developer that’s still finding its feet. It doesn’t always navigate the balance of new and old successfully, and the price is pretty steep for what it ultimately offers. Even so, I enjoyed it far more than I expected to, and that in my book makes it worthy of a recommendation. 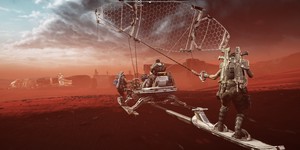 The fist-pumping, chest-bumping, space jock shooter is back, but is it any better?