"One is the loneliest number" crooned Harry Nilsson, probably not expecting to be quoted in a review for Activision's latest blast-em-up. But you see, I just can't help it.

The problem is that if you're playing with yourself, Call of Duty: Black Ops 3 is a tepid experience. The fun multiplies with every additional player you add to the mix like some sort of action game broth, but if you don't have friends to play with you should stop reading this review now.

Call of Duty: Advanced Warfare is good. I'd recommend that.

With friends, though, you're likely to find something to enjoy here amongst the mountain of content. In an age where AAA games are often trying to hawk you a season pass before launch, Black Ops 3's two campaigns (Zombie and normal), hoard of multipliers and customary competitive multiplayer feels like almost too much game.

The campaign's gunplay feels perfectly balanced, as ever - battles seem hard-fought but rarely unfair and the focus on movement fits well with the frantic pace of the combat. When you're playing Call of Duty: Black Ops 3 as it's supposed to be played with the shooting, the grenades, and the explosions then it's all good.

The problem with the campaign is that it's so tonally confused. Some levels will have you manning a turret while everything around you explodes without you even firing a round, and then you'll spend a level trying to survive suicidal combat-bots (Calling these combots forever more) charging at you through an underground facility. Heavily armoured enemies through your tactics out of the window as they soak up magazine after magazine of SMG ammo.

The story too, is wildly confusing. You'll hop in and out of memories, VR simulations and the real world - often jumping back and forth with no real understanding of what's going on. Levels are navigated from the excellent hub area that allows you to customise your loadout, appearance and abilities, with each soldier having a bedroom that displays your personal career statistics and your choice of collectibles. Brilliantly, this bedroom is yours and slots neatly into cooperative games, giving you a splash of personality.

One thing I think is innovative and great is that you can play any mission from the off. Despite the confusion if you want to jump ahead and play the last mission, you can. It means if there's a level you're bored of or struggling with, you can just jump ahead. This is good.

This continues with unique camouflage and gun setups available to be unlocked in the single player, which you can then use in multiplayer or the zombie mode. Camo you unlock in multiplayer and zombies can be used here too.

Seriously, there's just so much content in this damn game.

The core of it is solid: the new abilities you can unlock keep combat interesting while the focus on parkour and choosing your own path through the level keep things feeling interesting while still delivering on the core Call of Duty concept, the reason you're here. 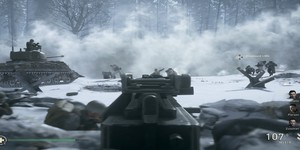 Another year, another Call of Duty. Does this one manage to impress?