Isolation’s Xenormorph is without a doubt the best Xenomorph to have ever Xenomorphed, and that includes the envisioning of the creature by Scott/Giger in the original film. Making a 35 year old rubber-monster frightening again is no mean feat, especially one that is as pop-culturally ubiquitous as the Xenomorph, lampooned everywhere from Spaceballs to the Simpsons. Isolation’s Xenomorph is a microcosm of the ideas embodied by the rest of the game, a perfect merging of scripted scenarios and dynamic systems, the audible, the visual, the tactile. Far from being the brittle, acid-filled balloon seen in Cameron’s Aliens or games like Aliens versus Predator, Isolation’s Xenomorph is a towering, ferocious, unstoppable monster that stomps around the game’s levels like Jurassic Park’s Tyrannosaur and hunts the player with a terrifying single-mindedness. Its physical presence is complemented by AI and game systems that are both ingenious and uncompromising.

Although there are scripted sequences in which the Alien will appear, for the most part its presence is dynamically system-driven. You’ll often hear it rattling about in the ventilation shafts above and below you, its precise location noted by the blips of your motion tracker, but also the remarkable sound design, which is totally deserving of a pair of surround-sound headphones. Make too much noise by running around or knocking over objects and it will come down to say hello, announcing its arrival with a terrible hiss. This is your cue to head for the nearest hidey-hole you can find, be it a cupboard, the underside of a desk, or simply huddled in a corner, hoping to god it doesn’t see you. The Xenomorph doesn’t have predefined patrol paths. It can move more or less anywhere you can, and that includes into ventilation ducts that you may believe are a perfect hiding spot. It will prowl through rooms in a natural, animal fashion, casting its head around the room, doubling back at random intervals, generally being a damned unpredictable bastard. Sequester yourself in a cupboard and it will often stand right in front of it, sniffing at the slits in the door. All you can do is lean back, hold your breath, and hope it doesn’t rip the door off its hinges and put you to a swift, messy end. If it spots you in the open environment, you’re dead. If you try to run from it, you’re dead. Guns will only enrage it. Fire, either from your flamethrower or crafted Molotov cocktails, will deter it, but only temporarily, and it will return with greater frequency and determination. I expect a fair few players will find the relentless nature of the Xenomorph offputting, especially given it can kill you at any point, even if you’re locked in an animation staring at a computer terminal, charging an electricity generator, or saving your progress at one of the designated save points (which, in a deliciously evil manner, count down for several seconds before saving, leaving you horribly vulnerable during that time). But I'd argue this is crucial to making the tension and the horror work. There needs to be a stake for the player, a reason to fear the enomorph, to cower from it, praying to whatever deity might be listening that it doesn’t see you, and to feel relieved and triumphant when you do evade it. That said, a word of caution. The game recommends Hard difficulty as the ideal experience. Yet when CA say ‘hard’, they really mean it, and if you do opt to play it that way as I did, expect a punishing (though not necessarily unfair) experience, especially early on when you’re still learning the ropes. 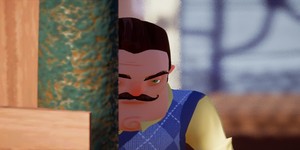 Hello Neighbor's fantastic premise is let down by shoddy execution.