With Halo 5 launching without its beloved split-screen co-op, it can be hard to cast your mind back to that golden age of the console split screen. AAA developers seem to have forgotten it, too.

On a 2D plane, you and your opponent face each other with swords aloft. Your goal? To reach the end of a series of stages to the right. To do that, you're going to need to stab a lot of enemies, all controlled by the partner clutching the controller next to you.

It's simple to learn, as there's a limited amount of interaction you can have with the world - shuffle side to side, raise or lower your sword, attack, and jump.

The depth is when these little movements come together - you dropkick your opponent into a chasm, stick him in the back as he runs away with a thrown sword, or throw yourself to the ground to roll past him as you move to the next stage.

At a party, Nidhogg is compelling viewing, equal parts spectator sport and contest - a whooping mess of slick takedowns and horrifying brawls for the baying crowd as the players fight for dominance. With a single friend, Nidhogg is a war of attrition, two players locked in immortal combat. The focus switches learning your opponents play style and throwing it back in their face amidst repeated cries for just one more go.

If you've got a lot of people in one space, Gang Beasts is what you want.

The premier "-- person brawling in a chaotic mess" game, Gang Beasts gives you four abilities: You can move around, raise your arms, grab and jump and you need to use these to drop your enemies to their deaths like a squishy animal themed Royal Rumble.

There's a lot of variety to the levels, from fights on the top of speeding trucks to daring life or death-defying aerial feats as you try to survive an assault on top of a ferris wheel.

It's not a game you'll ever want to play single player, and it's not a game with a mountain of depth, but if you've got the players, it's 100% a good use of your time. You'll laugh, you'll cry, you'll fall out with your friends when they team up on you to toss you in front of a train. 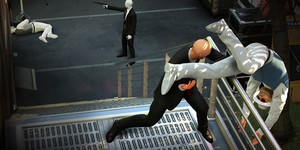 A Requiem for Dead Multiplayer Games

Looking back at some of the online souls we've lost.