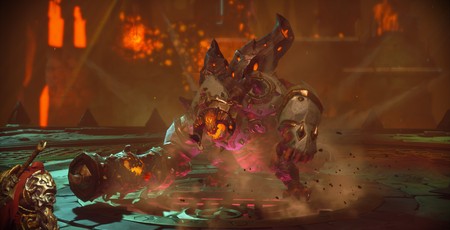 I should probably stop being surprised when a Darksiders game turns out to be good. There’s just something about the franchise that always suggests the games are going to be a bit naff. Ok, Darksiders III was a little bit naff, but only in comparison to the excellent Darksiders II. It felt like a step backwards, but it was a step backwards from being basically brilliant into being A-Bit-Disappointing-But-Still-Quite-Good-Actually. I did it again with Darksiders: Genesis, an ARPG spinoff developed by someone who isn’t Vigil/Gunfire. My immediate response? Probably going to be a bit naff.

But it isn’t! It’s a good looking, well-designed bit of lighthearted demon-stomping fun. It’s also definitely a Darksiders game. Don’t let the new perspective fool you. Genesis may look like Diablo, and at times play like Diablo, but much of the Darksiders’ spirit remains. As the title suggests, Genesis acts as a prequel to the previous Darksiders. Its story is as delightfully silly as I’ve come to anticipate from the series. In the world’s biggest “How can we possibly not have seen this coming?” It turns out that Lucifer has been up to no good (No, not Lucifer!) Suspecting Satan of some dastardly scheme, the Charred Council (who are basically the arbiters of reality) dispatch two of the four horsemen, War and Strife, to Hell so they can investigate.

That’s right, you’re going to Hell to fight the Devil, the quintessential ARPG plot. Of course, the road is far from straightforward, seeing you partner with your treacherous demon-pal Vulgrim on a series of MacGuffin hunts before you can get to Lucifer himself. Genesis is evidently designed with cooperative play in-mind, and that’s probably the best way to experience it. If like me you have a small child and therefore have shed most of your friends like the skin of a snake, however, then singleplayer lets you neatly switch between those two characters on the fly.

And what a great duo Strife and War make. If you’re a Darksiders fan you’ll be familiar with War, the grouchy, honour-driven straight-edge who prefers to do most of his talking with his massive sword. Strife is a new playable character in the series. Personality-wise he’s the antithesis of War, a lively and chatty fellow who likes to fill the silence with bad jokes and prefers to be paid in coin rather than honour. It’s a biblical buddy-cop movie, and the action-comedy tone it adopts suits it perfectly. Throughout the game Strife and War bounce witty rejoinders off one another. Or rather, Strife does the bouncing while War grumbles about it. For a game about the Harbingers of the apocalypse battling through hell, it’s surprisingly affable. Of course, we didn’t come here for the talking. Strife and War are equally different in combat as well. War is the close-up tank, able to block enemy attacks and smash opponents to bits with his sword. Strife, meanwhile, prefers to fight from a distance with twin submachineguns. Even in the early game, the combat has a real sense of weight to it. War’s attacks have a real crunch to them, while Strife quickly unlocks a “Charge Shot” ability that immediately became a staple in my approach to combat.

Combat expands upon these basics in a whole bunch of ways. Across the game, each character gets three special powers, and a bunch of different ammo/sword abilities. War, for example, starts off the game with ability to cause a circle of blades to erupt around him, while Strife can create a clone of himself that damages and distracts enemies. You can also purchase new combos and combat abilities from Vulgrim’s apprentice named Dis. And on top of that there’s a passive abilities tree which lets you take “gems” from fallen enemies and insert them for various types of buffs, like the ability to leave a trail of lava while dodging. As I mentioned earlier, while Genesis may resemble Diablo, at its heart it remains Darksiders. Interspersed within levels are puzzle-platforming sequences where you’ll need to hop between wooden beams or use items like sticky explosives to clear a path ahead. Strife and War also gain access to new equipment that lets them solve more elaborate puzzles. The spinning Vorpal Blade that can be used to ignite fires, while “Void Grenades” create traversable Portals at set points on the map.

All of this works well. The script is good, the mechanics are slick and neat, and the visual style is striking and characterful. You can almost feel the heat from Hell’s lava flows, while the bits of hell that have apparently frozen over convey that chilliness through crisp snow and glistening ice. I have one major issue with Darksiders: Genesis, and that’s the emphasis on replaying levels. Basically, your levelling is geared to make you always slightly underpowered for the next stage, encouraging you to go back and replay levels. because you didn’t have the right powers. I’m all for replayability in games, and in fairness to Genesis, it does include puzzles and areas that you can’t access first time, giving you some reward for replaying beyond the grind. Nonetheless, having to go back and replay a level you only played half an hour ago so that you’re the right level for the next one is not a design-decision I particularly appreciate.

Apart from that, Genesis is a slick and thoroughly convincing blend of Darksiders and Diablo. It looks great, it feels good, and it has just the right tone to keep you engaged without taking its patently daft story too seriously. If you’re looking for a fun, relatively disposable game to enjoy over the holidays, you could do far worse than Genesis.