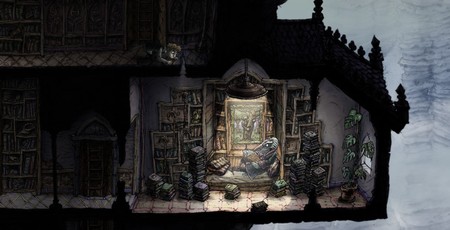 The best thing about Creaks is the music. Lurking quietly in the background, Creaks’ music doesn’t seem that special at first. Then you’ll be fathoming over one of Creak’s many conundrums, and as you uncertainly slide a piece into place, you’ll hear a jingle, a little trill on a piano or a dropped drumbeat, and you’ll immediately know that piece is supposed to go there. The more of a puzzle you complete, the more layers are added to the tune, until you skip out of that room to a jazzy little ditty, puzzle officially complete. It’s a superb use of audio cues, seamlessly woven into the game’s soundtrack. I don’t know if other puzzle games have done this, but encountering it in Creaks feels revolutionary. I want all adventure games to do this now. I can’t go back.

In case you’re worried that my fronting of this feature means the rest of the game is rubbish, fear not. Creaks is all-around excellent, a beautiful, clever and delightfully creepy adventure puzzler that’s easier to fall in love with than Keanu Reeves bringing you apple pie. It also marks a distinct evolution from Amanita’s previous games, moving away from its traditional point-and-click format toward more involved mechanics and ideas. Creaks starts off as a simple story about a man trying to fix his bedroom light bulb. Yet what initially seems like an electrical fault soon reveals itself to be a much bigger problem, as an earthquake reveals a door hidden behind the room’s peeling wallpaper. Investigating, your character discovers a labyrinthine subterranean town under threat of destruction by an enormous monster.

Given how I evangelised the music, it would be deeply unfair of me not to do the same for the art. Creaks’ world looks like Tim Burton’s wedding cake, crooked tiers of ramshackle Gothic architecture all teetering on a precipitous outcrop of rock. There’s a wonderful moment early on where the camera zooms out to reveal the world in full, showing you exactly where you are and the towering expanse of where you haven’t been. It’s almost too good, as it made me want the ability to zoom out like this throughout. Creaks’ room layouts are neatly consistent with that wider world, and I’d love to pinpoint my current location at will. This cluttered, dilapidated style is reflected at the micro-scale, too. Each room you enter resembles a curiosity shop run by a miser, stuffed full of trinkets and oddments, clockwork thingies and dust-caked whatchamacallits. It’s a place held together purely by the competing forces of stuff piled alongside other stuff, and hence you get a palpable sense of foreboding whenever the structure shudders or judders, threatening to collapse.

Stylistically, Creaks straddles the line between comedy and horror. Amanita has plenty of experience with the former in games like Botanicula and Chuchel, while it's also designed more atmospheric experiences such as Samorost and Machinarium. The way the studio combines the two sides of its personality here is mightily impressive. During your adventure, you’ll meet crotchety bird-people searching for a book, and navigate rooms filled with chittering statues and tools that watch you when your back is turned. One of the game’s more unique design details is its approach to collectables, all of which take the form of interactive portraits you encounter while you travel. Telling stories that range from duelling knights, to adventurers surviving a night in a spooky woodland, these painterly vignettes are peak Amanita - surreal, kooky and often amusing. The idea of inanimate objects coming to life a key theme and mechanic of Creaks. All the puzzles are formed around different creatures in Creaks’ world, from boxy-looking dogs who charge at you when you get too close, to creepy tree-people who cackle at you as they mimic your movements. All these beasts will kill you if you touch them, but they also turn into everyday objects when exposed to light. Manipulating this is the essence of Creaks’ puzzling. A simple example might find you trying to bypass a sleeping dog to get to a ladder just out of reach. Approach the dog in its current state and it will maul you within seconds. Expose the dog to light, however, and it’ll turn into a chest of drawers, which can then be clambered upon to reach the ladder’s bottom rung.

Of course, the puzzles are rarely so simple. Most will require you to manipulate Creaks’ denizens into the correct positions, using their unique movement patterns against them. The dogs, for example, can be fooled into running onto pressure plates to activate different mechanisms, or into areas that can be blocked off. Some creatures are also affected by others. Later in the game, you’ll encounter skittish goats the dogs will eagerly chase and strange jellyfish that frighten them, the cowed hounds backing sheepishly away when approached by one. For the most part, the difficulty of these puzzles is perfectly balanced. Everything you need to complete them is always on-screen, and unless you’re killed by a creature, it’s impossible to get into a position where you’re stuck and need to reset. That said, there are a few puzzles that frustrate toward the end. Later challenges involving the tree-people often require counting your steps in a way that’s too fiddly to be enjoyable.

Aside from that, the only other criticism I can dredge up is that the story is overly simplistic. It’s a fun ride, while Amanita’s ability to convey emotions and plot points without a word of dialogue is superb. Yet while I enjoyed the adventure in the moment, afterwards I didn’t feel like I’d gained much else from it. The game touches upon themes of materialism in its cluttered world, how having too much stuff can literally come back and bite you in the backside. But Creaks isn’t interested in exploring the notion too deeply, content to leave it as a backdrop for a daft adventure story. Obviously, I’m nit-picking here. Creaks is Amanita’s most accomplished game since Machinarium, six-to-10 hours of creepy yet funny puzzling, with splendid art and the best use of dynamic music I’ve encountered since last year’s Ape Out. I thoroughly recommend it.