A couple of weeks ago we saw and tested a preview of USB 3.1 courtesy of MSI. USB 3.1 increases the maximum data transfer rate from the current 5Gb/sec to 10Gb/sec (1,250MB/sec), though of course there are various overheads to consider which will prevent this theoretical maximum from being hit. Nevertheless, it's a welcome upgrade, and this time around we're looking at a solution from Asus. As with the previous article, we are simply running a few basic speed tests to gauge an estimate of what you can expect from the new standard. Cick to enlarge
The kit from Asus comprises its Z97-A/USB 3.1 motherboard and the Asus USB 3.1 Enclosure. The board is a retail product due for release soon, making Asus first to the post when it comes to having a final USB 3.1 retail solution ready. It uses the ASMedia 1142 PCI-E to USB 3.1 controller to power two teal blue USB 3.1 ports on the rear I/O panel, which replace the USB 2.0 ports on the original Z97-A. Other than this, the new motherboard is, as far as we can see, the same.

Cick to enlarge
The USB 3.1 ports leave it with zero USB 2.0 ports now, though it still retains USB 2.0 headers and, since the USB 3.1 ports use the standard Type-A connector, they are fully backwards compatible with USB 2.0 devices anyway. There are none of the new reversible Type-C connectors on-board, and no header out for USB 3.1 either, though this isn't a major issue in either case, since devices with the Type-C connector aren't available yet, nor are chassis with front-mounted USB 3.1 ports. Cick to enlarge
The Asus USB 3.1 Enclosure, meanwhile, is not a final retail product, merely something concocted by the Asus engineers for testing purposes. It is a simple PCB inside a black aluminium Lian Li EX-M2 enclosure, meaning it fits to the 2.5in form factor. Externally it features a micro-B USB connection for power (via mains) and a Type-C USB 3.0 connection for data transfer, as well as a series of indicator LEDs and a jumper. Cick to enlarge
Similar to the test board provided by MSI, the PCB inside features the ASMedia ASM1352R controller (USB 3.1 to SATA 6Gbps) and two SSDs, albeit mSATA ones instead of 2.5in ones. The drives themselves are both 250GB Samsung SSD 840 EVO drives, and they are formatted into a RAID 0 partition, just like the Intel SSD 730s on MSI's test board. Striping them like this is necessary since by themselves standard SATA-based SSDs like these are limited to 6Gbps transfer speeds, which is not enough to properly test what USB 3.1, at 10Gbps, can really do. Cick to enlarge
Asus also supplied us with an updated version of its AI Suite III software, which includes its exclusive USB 3.1 Boost software, designed to push USB performance further. Asus claims its engineers have managed sustained sequential read and write speeds of 854.6MB/sec and 863.9MB/sec respectively over USB 3.1. The highest speeds we saw when testing with MSI's hardware were 650MB/sec read and 509MB/sec write. Cick to enlarge
If you're thinking that the existence of the Z97-A/USB 3.1 suggests an Asus motherboard refresh is in the works, then you'd be right. We can exclusively reveal that the company will be launching fourteen refreshed motherboards with USB 3.1 connectivity later this month. These boards are:The difference between the twelve with the '/USB 3.1' suffix and the two containing the '/U3.1' suffix is that the former will ship, like the Z97-A/USB 3.1 here, with two on-board Type-A USB 3.1 connectors, while the latter will have the same two ports accessible via a bundled PCI-E x1 add-on card instead.

Cick to enlarge
You'll note that the refresh is for Intel-based motherboards only at the moment. However, users with an appropriate expansion slot free on any motherboard will also be able to purchase one of two Asus PCI-E x1 USB 3.1 add-on cards as well – one with two Type-A connectors, one with one Type-C. Asus is not, for now, offering any motherboards with built-in or bundled Type-C connectivity, which makes sense given the current lack of suitable devices. Finally, there are no Asus ROG boards with on-board ports. However, the ROG development team is quite separate from the regular motherboard team at Asus, so a separate announcement could be coming from them with regards to USB 3.1 support (though that's just speculation on our part).

We did also receive a press release from ASRock recently informing us that it too will be refreshing its range, and will have the world's first Intel X99 and Intel Z97 motherboards with on-board (or bundled) Type-C connectivity. It will also offer two expansion cards like Asus; one with dual Type-A connectors and one with a Type-C and Type-A combination. 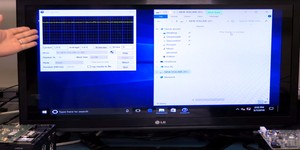