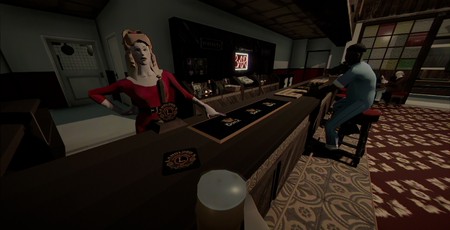 Landlord’s Super is a love-letter to British mediocrity. It’s both an homage to and a timely reminder of the bleakest and most miserable elements of our culture, elements that we not only readily accept, but often take a bizarre pride in. It’s about building a crap house in a crap town, making crap money from a crap job and drinking crap beer from a crap pub. Developed by Jalopy creator Greg Pryjmachuk, Landlord’s Super is set in 1983, and takes place in the recession-stricken northern town of Sheffingham. Your character is the “lucky” recipient of a Right-to-Buy council house that more closely resembles a council tip, a rotting pile of four half-finished walls that you need to transform into the house of your dreams, which is to say, habitable.

Fixing up your house involves a whole bunch of different processes, from laying foundations to building walls, re-tiling the roof, and plastering the interior. You’ll need to acquire all the basic tools and resources, mix concrete for the floors and mortar for the walls. Imagine Animal Crossing was set in Burnley, and you’ve got a fair idea of what Landlord’s Super is like. We’ll discuss the minutiae of your construction project shortly. But actually, building the house is only the start of your problems. Sheffingham is one of the many victims of Britain’s economic transition from a country of industry into a front for laundering the money of Russian oligarchs, and the town is in the grip of a deep recession. You’re skint, everyone else is skint, and the only job available to you is washing pots at the local pub, which pays a measly £4 per hour.

Buying all the gear you need to do up your house is going to take donkey’s years. Luckily for you, then, that you bump into Scouse Jimmy. Scouse is Sheffingham’s Del Boy, a chancer who you first encounter trying to break into your site, but who quickly becomes your self-made guru. Not only does he provide detailed instructions on how to approach each element of your construction, he also knows where one might “quasi-legally” acquire the appropriate building materials, whether it’s sand and cement from around the back of number 9, or bricks from the pub wall that was knocked down by a local drunk-driver. Each in-game “day” lasts about ten minutes, and while you’re free to do whatever you like in that time, you have a limited amount of energy with which to do it. You might want to head to the pub and put in a dishwashing shift so you can buy some basic tools. Alternatively, you might head over to a derelict factory and see if you can’t lift some building supplies and/or valuable scrap to sell to the rag-and-bone man. Or you might just want to head down to the pub and neck a few pints, which will refill your energy bar, but also get you drunk in the process.

Eventually, you’ll acquire enough supplies to finish a portion of your house. The construction simulation of Landlord’s Super is impressively complex. When you’re mixing concrete or mortar, you need to combine ingredients in the right amounts, otherwise you’ll end up with grey water or sticky sand. Similarly, when you’re laying bricks, you need to make sure the mortar is flat so that your bricks line-up correctly. Get it wrong, and you may have to demolish the part of the house you’ve just built so you can build it right this time, forcing you to do more pub shifts to acquire the money you need for resources. Despite still being very much at the “Early” part of Early Access, the core loop of Landlord’s Super is pretty enjoyable, skivvying around town with your wheelbarrow for resources, slowly watching your house come together. Also, as a northerner myself, I’m impressed by how Minskworks has captured the grim mundanity of your average northern town. From the squat brick pub that has the aura of an 18th Century naval fort, to the sloping streets of browny-red terraced houses, Sheffingham is a perfect encapsulation of all the formerly industrial towns I visited growing up, Bury, Bolton, Stockport, Preston. There’s bits of all of them in Sheffingham.

There are a couple of fairly obvious issues that need to be resolved between now and release. Moving stuff around in the wheelbarrow can be frustrating, as you can only put a few things in it before the in-game physics starts tossing objects back out like a grouchy toddler throwing her dummy out the pram. Landlord’s Super also has an interesting inventory system where key objects like tools and your notebook are physically on your person, and you access them by looking down. Unfortunately, it can often be difficult to highlight the right object, and I think having assigned keys as an alternative would alleviate some of the frustration. Depending on how efficient a builder you are, Landlord’s Super currently offers a pleasant five-to-10 hours of house construction, beer consumption, and low-level crime. Minskworks plan to add more breath to your construction project (such as being able to decorate and furnish the interior) and more interactions opportunities with Sheffingham itself. Be assured that we’ll send a building inspector around once the project is finished.