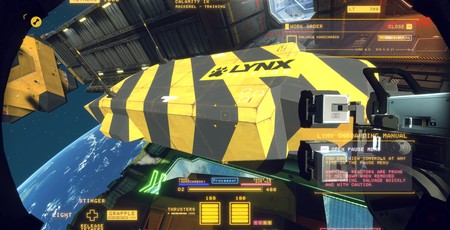 First I cut off the nacelles. It’s a quick slash-and-tether job on either side. Easy money for the amount of work involved, especially if it’s a transport ship. Those gals have double the number of nacelles compared to cargo ships. It’s a little mindless, but worth it for the credit. Once the nacelles are salvaged, I aim for the reactor. The reactor’s where you break even, by which I mean, you don’t go any deeper into debt. You can’t go straight at it, that’s a good way to get yourself splattered all over the dock. Any shipbreaker with two brain cells to rub together will cut away the hull section underneath the reactor. Then you can just tether the reactor straight onto the salvage barge, pulling it like the grape off a vine.

Once the reactor’s done, I can go one of two ways. If it’s a one-day job, I’ll focus on getting as much metal and nanocarbon from the ship’s hull as possible. If it’s longer than a day, I’ll save that for later, and instead try to pry out the power cells and the coolant tanks. There’s good money in those, but they can be fiddly to get out. You gotta cut through the aluminium of the interior wall into the hull compartments, and then carefully pry them out. There’s always a risk you might knock the coolant tanks and instantly popsicle yourself, or get too close to the power cell and fry inside your spacesuit. Anyway, on a good day, I can pull apart a whole Mackerel in two shifts, make in the region of five million credits. On a bad day, well, you don’t want to know about a bad day.

Like an abruptly-depressurised ship compartment, Hardspace: Shipbreaker has one of those premises that instantly sucks you in. Blackbird Interactive’s sort-of follow-up to Homeworld: Deserts of Kharak tasks you with surgically dismantling old spaceships, salvaging and recycling their parts for cold, hard credits. It’s such a great premise that I’m amazed it hasn’t been done before now. I’m also glad that it hasn’t, because even in this early access stage, Blackbird Interactive delivers the concept with style and panache. You play a recently-hired employee of Lynx Salvage, a professional shipbreaking firm in charge of decluttering Earth’s orbit of all the space junk accrued from centuries of celestial neglect. For this job, Lynx only selects the very best candidates via a rigorous application process. Specifically, one that ultimately costs one billion credits to apply for.

Given your new job has put you in a hole to the tune of approximately 1/160th of a Bezos, simply breaking even is going to involve a serious amount of salvage. Play sessions are divided into individual “shifts”, which see you either selecting a new ship to manually decommission, or continuing with a previous job. Any ship you select is immediately transferred to your shipbreaking dock, a hollow square floating in zero g with various depositories for different ship parts. The act of shipbreaking is a far cry from, say, the wanton destruction of Red Faction Guerrilla. Your tools are scalpels rather than hammers, including a dead-space-style cutting laser (complete with axis-flipping barrel), and a less powerful, but more precise variant of Half-Life 2’s gravity gun, which is used to manipulate ship parts in the game’s up-less, inertial environment. You also have a scanning tool that lets you visualise the cross-section of your chosen ships, highlighting important ship components, key cutting areas, and potential hazards.

What results, essentially, is an anti-crafting game, involving many of the same mechanics and processes of something like Minecraft or Satisfactory, but with the end-goal of taking something apart rather than putting it together. The act of cutting though hulls and separating components and materials for appropriate disposal has a similar hypnotic appeal of building your farm or factory. It’s a game of process and concentration. Each ship is like a puzzle that needs to be carefully solved, because unlike, say, a Rubik’s cube, these puzzles can explode if you do them wrong. Shipbreaking might pay well (eventually), but it’s also a dangerous job. Every shift will see you dealing with unstable reactors, pressurised compartments, and all manner of flammable and electrical materials. On top of that, you’re also working in space. Both your Oxygen and jetpack fuel supplies are limited, and need to be regularly replenished to stop you from either suffocating or becoming trapped in the inky void.

Consequently, care is important in ensuring the job is well done. But you also need to be efficient. A single shift lasts only fifteen minutes, in which time you need to earn at least half a million credits simply to break even for the costs of paying the interest on your application loan, and the fees for habitation and various other costs. Hence, you’ve got to balance working safely with working fast. It’s on this zero-g tightrope where Shipbreaker’s systems really sing. You’ll be trying to complete one last task on your work order before the shift ends, and accidentally cut into a floating O2 tank. Immediately, half the ship will be consumed in flame, and you’ll end up a crispy addition to the salvage. Lynx will of course bring you back via their cloning technology, but that’ll add some extra fat numbers to your already-terrifying debt.

Inevitably, Shipbreaker’s concept is bound up in corporatist satire (what’s a space game without it, eh?). Unlike other recent space games such as The Outer Worlds or Journey to the Savage Planet, Shipbreaker plays that satire far more subtly. You’re not dealing with psychopathic CEOs or wilfully zany middle-managers. Instead, your supervisor is a kind and conscientious individual who gently and intelligently guides into being a good little worker bee in a job that you like doing. Sure, it might kill you, and nobody would care, but it’s fun. Shipbreaker seems to understand the insidiousness of capitalist exploitation, and I hope it doesn’t succumb to the desire to put in dumb and obvious jokes. I’m completely sold on Shipbreaker’s concept, and thus far the delivery is near flawless. What the game mainly needs from its time in early access is more. More ship types, more components, more hazards. I also personally hope that it gets weirder as it progresses. I’d love to see you dismantling “dirty” ships filled with extra-terrestrial matter or other strange interstellar phenomena, working amidst the remnants of an Alien-style disaster, perhaps. There’s fantastic potential for unique storytelling within Shipbreaker, and I’m excited to see where Blackbird Interactive goes with this rock-solid foundation.