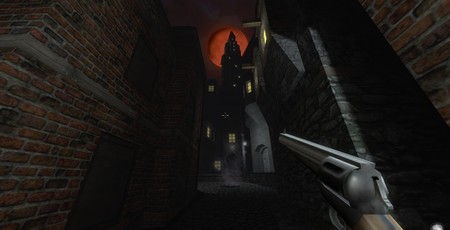 It would be easy to say that Gloomwood is inspired by Thief: The Dark Project. It would also be inaccurate. The Dishonored series was “inspired” by Thief, taking the broad design ideas and spinning them off with a bunch of other concepts into something largely new. Gloomwood, however, drinks more deeply from Garrett’s (presumably stolen) cup, entering into the more specific territory of pastiche. Today pastiche is often used as a derogatory term, for artworks that are viewed as a lesser version of an earlier, better creation. But Gloomwood is a pastiche in the original sense of the word, namely elevation through celebration. From art to audio to systems, it is a delicately crafted homage to the original stealth masterpiece, one that seeks to remind you of all was great about Looking Glass’ most successful game.

That isn’t to say, however, that Gloomwood exists purely as a tribute. Developers Dillon Rogers and David Szymanski (who previously created the splendid retro-FPS DUSK) have their own ideas of what it wants to do with Thief’s template. From the couple of hours I’ve spent with Gloomwood’s (now available) demo, the results are potentially very interesting. Gloomwood puts you in the role of a nameless doctor in a city ravaged by a mysterious affliction, which could be a disease, or could be something else. Your initial objective is to rendezvous with an associate who goes by “G”, hiding in a manor house on Main Street. But the house is fortified with a magical barrier that can only be disabled by finding two talismans, one housed in the nearby jail, and the other located somewhere in Gloomwood’s sprawling docks.

Gloomwood dives deep into replicating the base mechanics of Thief for its own purposes. Stealth is both light and sound based, with shadows and silence being your two most effective weapons. Thief’s light crystal is replaced with a waxing and waning moon that shows you how visible you are, while different floor-types affect the loudness of your footsteps. You can move relatively quietly on stone, for example, while metal surfaces will have you clattering around like a professional kitchen. But Gloomwood also replicates many lesser systems of Thief. For example, sound accurately propagates between rooms and through surfaces. Closing a door will muffle any sound stemming from behind it, but you can then lean against the wood to “eavesdrop” on guards shuffling around the far side. You can also pick up and stack many in-game objects, barrels, crates etc, to create your own pathways through the game world.

This latter point is also important for one of the ways in which Gloomwood differs from Thief. Like the Dark Project’s unnamed City, Gloomwood is a Victorian Gothic sprawl of metal and stone, where cobbled streets crisscrossed by tight alleys and ginnels thread between towering tenements. Its syrupy black darkness is punctuated by sallow lanterns and the alabaster glow of the Moon hovering above. Gloomwood’s affectation of Thief’s angular, lo-fi geometry is superb, and you get that same sense of strangeness from its crooked buildings and winding pathways. Unlike Thief, however, where you only ever see the City is individual chunks, Gloomwood is a single, consistent space that you can freely explore. Admittedly, said exploration is fairly limited in the demo, but you can choose whether to head toward the jailhouse or the dockyards first. Moreover, these individual areas have multiple available pathways to your objective, ventilation ducts and secret passageways that help you slip by your enemies.

I think having Gloomwood openly explorable is the right call by the developers, since Thief increasingly leaned in that direction as the series went on. However, one of the advantages of Thief maintaining some amount of separation was the ability to create showstopping themed levels, each one feeling like an event in its own right. I worry that Gloomwood’s open-city may lose some of that distinction. The areas you explore in demo are fairly small by comparison. Of course, they are only the opening areas, and I don’t doubt that bigger surprises await deeper inside Gloomwood. Gloomwood’s other major diversion from Thief is that you’re not helpless in a fight. Alongside a lethally sharp cane-sword which can instantly kill an enemy from behind, you also have a revolver and a shotgun. If you’re spotted by one of the behatted Hunters lurching through the streets, you can defend yourself with relative ease.

I’m in two minds about Gloomwood’s inclusion of guns. On the one hand, it’s useful to have the option. While Gloomwood is primarily a stealth game, there isn’t that same pressure to “ghost” levels. Going loud when necessary feels both natural and satisfying. What helps is that while the guns are powerful, they’re A) very loud and B) quite slow to reload. I had a couple of encounters where I’d be backed into a corner, frantically trying to shove shells into my shotgun while being blasted at by several Hunters, all because I’d panicked and shot one after being spotted. That said, I worry that the weapons distract from Gloomwood’s otherwise superbly crafted atmosphere. Some of the enemy designs are wonderfully creepy, particularly the skittering, chittering crowmen who inhabit Gloomwood’s sewers. But simply being able to blast the feathers off them makes them feel less threatening than if I was skulking around with a blackjack and an arm like a boiled noodle. One of the reasons Thief is such a thrillingly tense game is the knowledge that hiding and running are your only realistic options. Gloomwood letting you fight inevitably sacrifices some of that tension.

That’s the case on normal mode, anyway. One of Gloomwood’s features I’m most excited about is its difficulty levels, particularly the fantastic looking “Blood Moon” setting. Not only does this make all your opponents tougher and more numerous (as well as reducing the available resources in the environment), it also turns the Gloomwood’s moon a deep and threatening crimson. Thief was always most rewarding when played on Expert, and I reckon Gloomwood will be similar in that sense, forcing you to think hard about your movements and making guns an absolute last resort. It’s hard to tell how Gloomwood’s twists on Thief’s formula will bear out with the demo’s limitations. But what I can say for certain is that in look, sound, and feel, the core game hits all the right notes. Through DUSK and AMID EVIL, publisher The New Bloods has demonstrated a talent for bringing the mid-nineties into the 21st Century, and if the rest of Gloomwood holds up to the standards of the demo, it could be their best project yet.