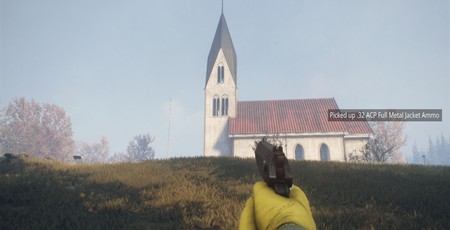 Gather round, readers young and old, while I tell you about the legend of Ulfric and Wulfric, and their epic adventure to find a gun that wasn’t shit.

Ulfric and Wulfric were identical twins. One day, the brothers awoke on the shore of a remote Swedish island, abandoned by its native population after a sudden outbreak of a disease known as angry killer robots (a common affliction in the Arctic Circle). It was the tail end of the 1980s, a time in which anyone living in Sweden belonged to one of several ancient Norse clans, such as “Nerd”, “Metalhead”, and “Popular”. Ulfric and Wulfric both hailed from the Nerd clan. You could tell this by their thick glasses, bad haircuts and the beige sweaters they wore underneath their khaki jackets. As we all know, nerds are famously defined by their attire, rather than, say, their intellect or fascination with a particular subject matter, whether that be astrophysics or collecting Pokémon cards.

Anyway, both men secretly harboured a desire to break away from their birth clan, the Nerds being famously insular and traditionalist. Long frustrated in this ambition, the brothers’ new circumstances suddenly provided an opportunity. After all, nothing makes you cooler than saving the world from being overrun by deadly robots. Like anybody in a place they’re not immediately familiar with, Ulfric and Wulfric began their adventure by breaking into people’s houses and stealing everything they could find. What they found was an astonishing quantity of ammunition. It wasn’t long before their pockets were stuffed with shotgun cartridges, and bullets were rolling out of the hems of their trousers. Honestly, if there was a gun that existed, Ulfric and Wulfric had ammo for it.

It seemed like Ulfric and Wulfric would soon be heading for some riotous action. Unfortunately, what the brothers didn’t have were guns to fire the bullets. Despite the dozen-or-so ammunition types they carried. Ulfric and Wulfric only had a pistol and a shotgun to their respective names. These weapons were sufficient to destroy the two types of robot Ulfric and Wulfric repeatedly encountered, which included a gun-toting robot dog, and a weird floating mixing bowl that seemed to attract other nearby robots. But it wasn’t long before they were clamouring for something different. So Ulfric and Wulfric searched harder, but no matter how many houses they searched, or farms they plundered, they saw not stock nor trigger of a slightly more interesting firearm. Fortunately, Ulfric and Wulfric’s wandering was no longer aimless. They’d picked up a series of quests! At first they were excited, a mystery to solve! But as they followed this line further and further, a pattern quickly emerged. They’d arrive at a location, find that nobody was there, and be given directions to another location. Sometimes they might have to solve a simple puzzle, such as identifying several houses to search in a village, and there was always a handful of nigh-identical robots to shoot with their guns. But for both men, a word was buzzing in their brains like a neon sign on a chain of burger restaurants – repetitive.

By this point in their travels, Ulfric and Wulfric were becoming concerned at the emptiness of the world they had been dumped in. It was undeniably pretty. Ulfric liked the way the sunlight filtered through the autumnal leaves of the trees around them. But it also didn’t seem very interesting. Apparently, they were in rural Sweden, but it could have just as easily been somewhere like Minnesota. Also, shouldn’t a world populated by killer robots be a little…weirder? There was little about the place they were exploring that really stood out. After a couple of hours trudging from abandoned farmstead to abandoned farmstead, Ulfric and Wulfric were becoming thoroughly bored. They’d expected a tense and thrilling adventure, one that would forever rid them of the spectres of their nerdy past. Instead they were beginning to lose their senses, primarily of dress. In a desperate attempt to redefine his personality, Ulfric had thrown on all the clothes he’d collected in his travels. This included bright yellow drivers' gloves, a beanie hat, bright red trousers, and bright green shoes.

Far from the drab khaki man he had been hours before, Ulfric now looked like a killer traffic light. It was the most fun thing he’d done in his entire adventure, but it also felt very odd. Ulfric could no longer tell if the adventure he was on was the serious kind where interesting and dramatic things happened, or a tongue-in-cheek parody meant to be funny in a cheap way. Ulfric and Wulfric trudged on, stopping at fewer and fewer locations, as it became increasingly clear that little of interest was to be found in them. Ulfric tried to find something positive to say about his experience, and acknowledged that the two guns he had at least felt ok to shoot, even if they were boring. But Wulfric pointed out that they barely had to do any thinking to outwit their robot enemies. The array of useful items their backpacks, such as fireworks and boomboxes (because those were just lying around everywhere in the 1980s), suggested that they were supposed to be approaching combat tactically. But the tactic of Running Up And Shooting Everything seemed to be working just fine. So what was the point?

Eventually, Ulfric and Wulfric’s journey brought the pair of fluorescently-dressed nerds to a gigantic underground bunker. It was dark and spooky and full of annoying insectoid robots that leapt at their faces. Their exploration brought them to the control room, and there, resting on top of one of the control panels, was an assault rifle. Finally! The pair thought, now maybe things will get int- Nobody knows what happened to Ulfric and Wulfric after that. Some say they’re dead, others believe still searching for a way out of that bloody massive bunker. A few people think they went outside and shot some birds out of the sky in sheer frustration. After all, Ulfric had come a long way for that gun, and he was damned well going to shoot something with it.
What we do know is this. If the introductory island of Generation Zero is indicative of the entire game, then it has a long way to go before it’s anything close to entertaining. While the premise is intriguing, a hybrid of DayZ and Left4Dead, the game has neither the tension of the former nor the thrill of the latter. The world is attractive, but sorely lacks atmosphere or a style that makes it stand out.

Meanwhile, its approach to representing the 1980s appears to come down to a host of lazy character stereotypes that, for the most part, are applicable to any decade between 1950 and today. The combat has weight, but the enemies we encountered were not interesting to fight, while the quests amounted to a monotonous breadcrumb trail that requires players to do little other than move from place to place. All told, it’s a dishearteningly slow and bland introduction, and I can only hope that the larger game improves dramatically after those initial few hours.