We are proud to announce that we will be working closely with AMD to add Mantle support to our in-house game engine, Asura.

As Rebellion's CTO and Co-founder, Chris Kingsley explains, Asura powers all of our games – from – from advanced PC titles, to mobile and next-generation console games:

"It supports more platforms than almost any other engine we can think of and has important cutting edge features, including: tessellation, DirectX® 11 Compute Shaders, AMD Eyefinity technology, multi-GPU support and more."

"As one of Europe’s leading independent games studios we're dedicated to constantly pushing our technology as far as we can, and we're excited about the possibilities that Mantle brings to PC gaming and the industry as a whole."

Rebellion CEO and Creative Director, Jason Kingsley confirms that support for Mantle will be a crucial part of our plans for the next year:

"We believe that supporting Mantle will enable us to stay on the bleeding edge of PC gaming and ensure that we don’t leave any performance on the table when it comes to offering gamers amazing experiences."

"Our first Mantle supported title will of course be our flagship 2014 game, Sniper Elite 3. And although we can’t talk about them right now we can’t wait to reveal even more titles with Mantle support in the next year."

"Supporting Mantle in all our future PC titles will play a big part in what will be a huge year for Rebellion. 2013 has been a hugely exciting year for the studio, and 2014 is lining up to be even better."

Read more on the Rebellion blog 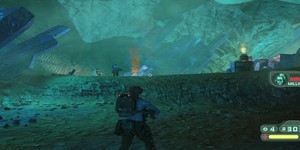 The best third-person shooter based on a 2000 AD property from 2006 returns, but has it stood up to the test of time?