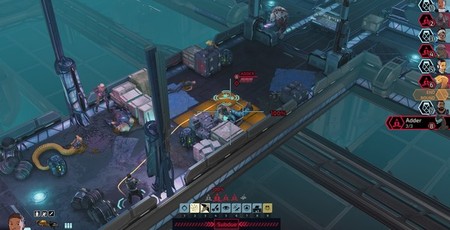 Firaxis has announced a new XCOM game is on its way, and it's out next Friday.

In an out of the blue announcement, XCOM: Chimera Squad was unveiled yesterday. It's an all-new standalone game that's set five years after the events in XCOM 2. It's a digital only Steam release that launches April 24th. Best of all? It's only £8.49 for its first week of sale before rising to £16.99 from May 1st.

The game takes place in City 31 where humans, aliens and hybrids work together to form a peaceful world after the fall of ADVENT seen in its predecessor. Predictably, not everyone wants peace, leading to some underground threats that need to be wiped out by you and your squad. Unlike past XCOM games which relied on procedurally generated team members, you're provided with a team of 11 unique human and alien agents, each with their own personalities, motivations, and abilities. That means any threat of one of the team being wiped out will make you even more nervous than when you simply got attached to your own newbie.

Because of this change to the formula, there's a new focus on combo abilities and interplay, ensuring that you'll work hard at maintaining a good team dynamic. One interesting new mechanic is the addition of interleaved turns which offers an alternating turn order rather than the usual method that can seem a bit stilted. The hope is that it'll make things a bit more strategic.

There's also a new combat phase called Breach Mode whereby you assign agents to different entry points and coordinate assault plans, utilising specific skills aimed at breaching buildings and so forth. It's an interesting new take on the usual strategy we've come to expect from the XCOM series. In a statement, lead designer, Mark Nauta, claims the hope is that it "will revolutionise how the game plays while still retaining the combat experience that makes the XCOM series so loved by gaming communities around the world."

XCOM 2 wasn't as well loved as the original rebooted title so Chimera Squad could be exactly what the franchise needs to get back on track. Priced at only £8.49, we can't really see why you wouldn't give it a shot. The game is available now to pre-order on Steam.