The National Museum of Computing, located in historic Bletchley Park, has announced a six-week festival for computing enthusiasts dubbed Summer Bytes, to kick off later this month.

The Museum hosts one of the biggest collections of vintage computing equipment in the world, ranging from a rebuild of Colossus - the world's first programmable electronic computer, built during the war to crack the German Lorenz cipher - through to digital-age classics like the Apple Lisa, the BBC Micro and the never-released Acorn Pheobe. As well as serving as a living museum, the site also plays host to numerous classes for coders and engineers young and old looking to learn more about computing and programming.

'As soon as schools are out for summer, the Museum will be extending its opening times to the general public with some really exciting events,' Chris Monk, volunteer at the Museum, announced of the festival. 'We've learned lots from the thousands of young people who have come through the museum in school groups and from our growing number of enthusiastic corporate groups and general visitors. So, we have put together a package of themes that are sure to entertain and enthral people of all ages.'

Events, demos and workshops confirmed for the event include video and computer gaming competitions combined with workshops on creating your own games, computer music, lessons in daytime radio astronomy, 3D printing workshops with access to a multi-colour commercial-grade 3D printer, coding workshops on Arduino microcontrollers and Raspberry Pi microcomputers in Python and Scratch, and several surprises the Museum isn't yet ready to reveal.

'As well as the Summer Bytes Festival, there is a huge amount to see at The National Museum of Computing, now recognised as one of the top computing museums in the world,' boasted Monk. 'From Colossus and the WITCH, the world's oldest working digital computer, to today's handhelds, we want to let people experience the fun, excitement and pace of computing developments through workshops and events, bytes and tasters, featuring dazzling applications that show how computing is changing our world.'

Sponsored by educational ICT specialist Tribune, which has provided numerous laptops to the Museum for visitors to use during their programming workshops, the event begins on the 24th of July and runs through to the 1st of September every Wednesday through to Sunday from 1300 to 1700. While the Museum would undoubtedly have liked to make the festival run all through the week and in the mornings too, it is staffed entirely by volunteers and relies on donations and commercial sponsorship to operate.

More details are available on the Museum's official website. 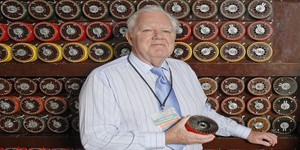 Promises to open-source its design.

Not quite a BBC Micro, mind.