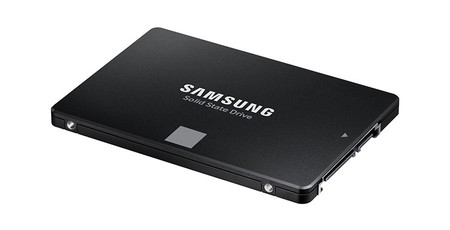 Samsung has launched a new series of SATA SSDs, the successors to the 860 EVO series from November 2018. With the new 870 EVO SATA SSDs Samsung claims to deliver best-in-class performance and reliability to the 2.5-inch SATA 6Gbps form factor, and these drives do indeed max-out the SATA interface - with sequential read and write speeds of 560 and 530MB/s, respectively, and are sold with five year warranties.

If your system doesn't have a free PCIe storage slot, perhaps it is an older system, or you have already used up the one or two M.2 slots available to you, then these SATA SSDs might be a good choice to boost your storage without resorting to mechanical HDDs. Samsung doesn't compare its new 870 EVO SATA SSDs with either of those storage rivals, it prefers to bask in the glory of presenting this series as a "compelling mix of performance, reliability and compatibility for casual laptop and desktop PC users as well as Network Attached Storage (NAS) users".

Moving swiftly onto the tech specs, including the key performance metrics, Samsung says that the new 870 EVO SATA SSDs come with the latest V-NAND and controller technologies to deliver their performance and reliability claims. The 2.5-inch 870 EVO SATA SSDs include a DRAM cache which varies with total storage capacity, a large variable SLC buffer, plus Intelligent TurboWrite technology. Thanks to Samsung applying this tech the drives peak at sequential read and write speeds of 560 and 530MB/s, maintain peak performance levels for longer, and provide Random Read 98K, Write 88K IOPS.

Samsung asserts that the 870 EVO drives deliver exceptional reliability too. It backs this up with its class-leading terabytes written (TBW) rating of 2,400TB and 5-year limited warranty, for its 4TB model (lower capacity models have corresponding lower TBW figures but retain the 5 year warranty).

The suggested retail pricing starts at US$49.99 for the 250GB model, rising to $479.99 should you require the 4TB model. Shipping starts later this month. If you are looking for higher capacity SATA SSDs, Samsung would steer you towards its 870 QVO models, launched last summer in capacities up to 8TB.