Microsoft has officially announced Windows 10 S, the rumoured new entry-level member of the Windows 10 family, along with a more traditional laptop device for its burgeoning Surface family.

Announced at a press event late last night, Windows 10 S is effectively the core of the Windows 10 Cloud Edition rumoured back in February. Where the Cloud Edition was a general-purpose operating system built around regular internet connectivity a la Google's rival ChromeOS and Chromebook devices, though, Windows 10 S has a different focus: education. As a result, it's little surprise to find that Microsoft has locked the device down considerably: Windows 10 S will, just like the Cloud Edition, be entirely unable to install any applications which do not come through the Windows Store - including legacy Win32 applications.

For those who have purchased a Windows 10 S device and who find this restriction a problem, the company has promised an upgrade to Windows 10 Pro for £49 - or free, if you purchase a Windows 10 S gadget between launch and the end of the year. As you'd expect from a cut-down operating system aimed at education, pricing is low: There's no word on how much Microsoft's original equipment manufacturer (OEM) customers are paying to licence the software, but it will be available on laptops starting at £299 and upwards - competing directly with ChromeOS Chromebooks, with the advantage of improved offline capabilities and a relatively cheap upgrade path to Windows 10 proper.

The company's initial own-brand Windows 10 S device, however, is priced considerably higher. The first Surface entry which is not a convertible two-in-one tablet-cum-laptop, the imaginatively named Surface Laptop is - entirely unsurprisingly - a plain old laptop designed to compete, the company claims, with Apple's MacBook Pro. Built around a 13.5" PixelSense touch-sensitive display protected by Corning's Gorilla Glass 3, the device comes equipped with an Intel Kaby Lake Core i5 processor, 4GB of RAM, and a 128GB SSD in its basic configuration with multiple price points available to the top-end Core i7, 16GB, and 512GB model. All models will, the company claims, feature up to 14.5 hours of battery life - 'up to four more hours of battery power than a 13" MacBook Pro,' the company's press material is quick to point out - and include a keyboard covered in suede-like Alcantara for reasons that clearly make sense to Microsoft.

Oddly for a laptop which comes in just shy of £1,000 in its basic configuration, Microsoft is launching the Surface Laptop with the cut-down Windows Store-locked Windows 10 S. As with the cheaper Windows 10 S devices promised from OEM partners, the Surface Pro laptop will not be able to run any legacy applications unless upgraded to Windows 10 Pro - free through to the end of the year, £49 thereafter. As with Microsoft's other Surface devices, each Surface Laptop comes with a one-year subscription to Office 365 when purchased before the middle of October this year.

More information on the new Surface Laptop is available on the official product page. 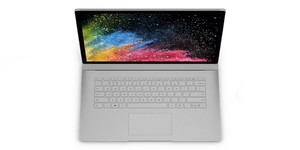 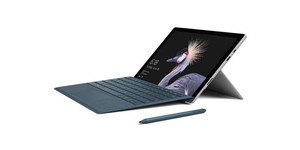 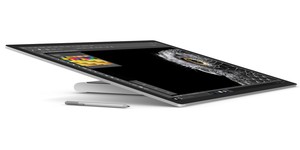