TechPowerUp has announced the launch of GPU-Z 2.0.0, which it describes as a 'major update' to its popular graphics card diagnostic tool, featuring an Advanced tab offering a greater depth of information than previous releases.

A popular tool for overclockers and those trying to track down instability or other graphical issues, GPU-Z is designed to do for a system's graphics cards what the otherwise unrelated CPU-Z does for the processor: pull as much information as possible from the hardware and software and show it to the user in as simple a manner as possible. 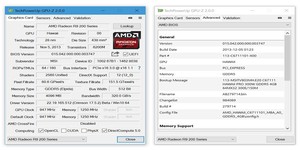 Bug fixes and Nvidia tweaks, too.