Advertising giant Google has made its biggest open source release to date: TensorFlow, a machine intelligence software library which underpins everything from the company's search algorithms to its speech recognition system.

Developed as a successor to DistBelief, the machine intelligence engine which the company has been using since 2011, TensorFlow is claimed to offer significant improvements over its predecessor. 'TensorFlow is general, flexible, portable, easy-to-use, and completely open source,' explained Google fellow Jeff Dean and technical lead Rajat Monga in a joint announcement. 'We added all this while improving upon DistBelief’s speed, scalability, and production readiness - in fact, on some benchmarks, TensorFlow is twice as fast as DistBelief.'

For Google, it's an interesting move. While the company has embraced open source in the past, it has typically stopped short of giving away the crown jewels: its Android operating system is available as the Android Open Source Project (AOSP), but the Google-branded apps it places on top - things like Google Play Music, Play Store, and Play Games - are resolutely closed-source. With TensorFlow, however, the company is placing no such restrictions: the entire library, as used by Google, is available under an Apache 2.0 licence for both research and commercial reuse and modification, though the company warns that it's more of a framework than a ready-to-deploy black-box solution.

The software itself was born from Google's Brain Team, a part of the company's machine intelligence arm, for conducting research into machine learning and deep neural network projects. The company sound found that its approach to the problem, in particular its use of easy-to-follow data flow graphs, made it extremely powerful - but it has no intention of keeping that power, which scales from mobile CPUs all the way to massively-parallel GPUs, to itself.

'If TensorFlow is so great, why open source it rather than keep it proprietary? The answer is simpler than you might think: We believe that machine learning is a key ingredient to the innovative products and technologies of the future,' the company explained in its official documentation on the project. 'Research in this area is global and growing fast, but lacks standard tools. By sharing what we believe to be one of the best machine learning toolboxes in the world, we hope to create an open standard for exchanging research ideas and putting machine learning in products. Google engineers really do use TensorFlow in user-facing products and services, and our research group intends to share TensorFlow implementations alongside many of our research publications.'

More information on TensorFlow is available on the official website where a copy can also be downloaded for hands-on experimentation. 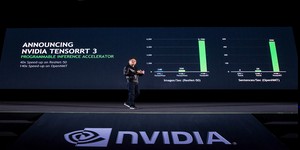