Designed to expand the SuperNova P2 power supply family, the new models inherit the same features of their predecessors: 80 Plus Platinum rating with a claimed 94 per cent or higher efficiency under typical loads on a UK power input; an Eco Control Fan system which shuts the 140mm double-bearing fan down under low to medium load and which can be disabled or enabled using a physical switch; and full protection against over-voltage, under-voltage, over-power, short-circuit and over-current conditions.

The new SuperNova P2 power supplies include a fully modular design, a single 12V rail with 70.8A, 52.4A and 54.1A respective output on each of the new models, an LLC resonant circuit design to boost efficiency, and Nvidia SLI Ready and AMD CrossFire Ready certification. EVGA claims that the PSUs use of Nippon Chemi-Con solid-state capacitors improves reliability, and it's putting its money where its mouth is by offering a 10 year warranty as standard on all models.

Each model in the range comes with ATX, EPS, PCIe, SATA, four-pin Molex, floppy and AC power cables, which connect to modular ports. Pricing for the parts, which have been described by the company simply as 'coming soon,' has yet to be confirmed. More information is available on the official website. 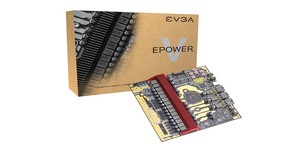