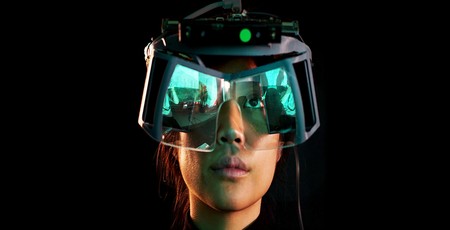 Motion-tracking specialist Leap Motion has announced it is getting into the augmented reality game in a major way, releasing a reference platform it claims to be the highest-resolution design ever created under a permissive open-source licence.

Best known for its USB-connected hand-tracking dongle, which would later be integrated into selected laptops, Leap Motion quickly realised how its finger-resolution tracking system could improve virtual reality. In 2014 the company released an add-on for the Oculus Rift which allowed the Leap Motion tracker to be mounted to the front of the headset, and in 2016 announced a VR-dedicated sensor platform. Since then, though, the company has been beavering away on an augmented reality system - one it is now willing to reveal.

The Leap Motion North Star is an augmented reality headset straight out of science fiction. Large, curved, partially-silvered mirrors dominate the front, giving the impression of a bug-eyed space creature - a bizarre appearance, the company admits, but one which has allowed for a considerable boost in image size and resolution. 'While it might seem a bit funny, it was perhaps the widest field of view, and the highest-resolution AR system ever made,' Leap Motion co-founder and chief technology officer David Holz explains of the company's prototype. 'Each eye saw digital content approximately 105° high by 75° wide with a 60 percent stereo overlap, for a combined field of view of 105° by 105° with 1,440 × 2,560 resolution per eye.'

The final design, which looks less bug-eyed alien and more Judge Dredd themed catwalk fashion show, is admittedly slightly lower in its specifications, though still impressive: 'What you see here is an augmented reality system with two 120 fps, 1,600 × 1,440 displays with a field of view covering over a hundred degrees combined, coupled with hand tracking running at 150 fps over a 180°x 180° field of view,' Holz explains. 'Putting this headset on, the resolution, latency, and field of view limitations of today’s systems melt away.'

Interestingly, Leap Motion is opting to push the field of AR forward as a whole, and will release its North Star headset design under a permissive open-source licence it has yet to fully detail next week. In the meantime, more information on the prototypes are available on the company blog.

Bring your fingers into your VR world.

Envy gets the hands-free treatment.