Google has announced a partnership with Asus to build stick-format computers running the Chrome OS operating system, as a means of competing with Intel's upcoming Compute Stick family.

Following the increasing trend for releasing pocket-size PCs running mobile-grade hardware in the smallest form-factor possible, the Asus Chromebit borrows heavily from the range of low-cost ARM-powered Android devices available from the Chinese market - right down to its choice of a quad-core Rockchip 3288 processor with integrated Mali 760 graphics processor. The mobile-centric system-on-chip (SoC) is paired with 2GB of RAM and 16GB of local storage, which Google - as with its Chromebook laptop range - hopes will be supplemented by heavy use of its Google Drive cloud storage platform.

As with its inspiration, the Chromebit is designed to connect to the HDMI port of any TV or monitor and draw its power via USB. A single USB port allows peripherals to be connected, although for neatness' sake - something aided by a clever hinged HDMI port - the Bluetooth 4.0 radio is a better option. Network connectivity is handled by 802.11ac Wi-Fi, with no wired port available.

In the announcement, Google's Katie Roberts-Hoffman positioned the Chromebit as 'the perfect upgrade for an existing desktop and will be really useful for schools and businesses.' Priced at $100 and due to launch this summer, the device goes up against Intel's Compute Stick and the more directly comparable low-cost Android-based sticks which have been coming out of China in recent years - many of which undercut the Chrome OS-based Asus Chromebit by a considerable margin.

UK pricing and availability for the Asus Chromebit has yet to be confirmed. 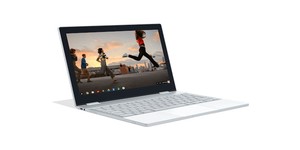