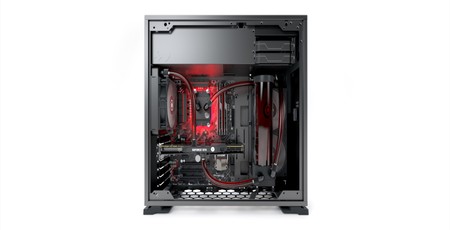 Once-and-former liquid cooling specialist EK Water Blocks has announced it is branching out into the world of pre-built gaming machines, all naturally including the company's in-house liquid cooling systems.

While EK Water Blocks, as the company's name suggests, has been offering liquid cooling components and accessories for years, the company has previously shied away from diversification more extreme than case lighting or cable management. That has ended this week, however, with the company announcing the launch of pre-built gaming PCs, built to a customer's individual specifications and featuring EKWB liquid cooling pre-fitted.

Dubbed, puntastically, the EK Fluid Gaming System range, EKWB's PC are launching in the US in May with international availability yet to be confirmed. As you might expect, each system is customisable depending on requirement and budget, with EKWB setting a base price of $2,099.49 (around £1,500 excluding taxes) for the 'entry-level' Hero model featuring an AMD Ryzen 5 2600 processor in an MSI B350 Tomahawk motherboard, 16GB of G.Skill Trident Z RGB memory, a Samsung 960 EVO 250GB SSD and Seagate BarraCuda 1TB hard drive, Nvidia GeForce GTX 1060 graphics card, EVGA SuperNova 650 G3 power supply, and EKWB's Fluid Gaming 240mm and 120mm dual-radiator cooling system pre-fitted.

The top-end Legend, meanwhile, features a Ryzen 2700X processor in an MSI X470 Gaming M7 AC motherboard, 32GB of G.Skill Trident Z RGB RAM, a 1TB Samsung 960 EVO SSD and 4TB Seagate BarraCuda hard drive, twin Nvidia GeForce 1080 cards in SLI, and an EVGA SuperNova 1000 G3 for $4,260 (around £3,030 excluding taxes). All models come with a two-year parts and labour warranty and lifetime support, and at present are available exclusively in customised InWin 101C cases - though having the option listed in the system configurator suggests EKWB may be looking to offer additional cases in the future.

More information on the Fluid Gaming systems is available from EKWB's website. 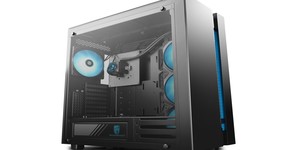 Deepcool has come a long way since its Genome pre-water-cooled case, but is the Deepcool Gamer Storm New Ark 90 worth the cash?