The Raspberry Pi has new competition in the form of a crowd-funding campaign for CHIP, an ultra-compact computer which its creators are selling for just $9 - with caveats.

The sub-£30 price of the Raspberry Pi at a time when single-board computers typically cost five or more times that figure made it attractive, but numerous similarly-priced competitors have emerged in the years since its launch. CHIP, from Next Thing Co., is the latest - and at $9, one of the cheapest to offer a full desktop-class computing experience for its users.

Significantly smaller than the already-diminutive Raspberry Pi, the CHIP has sacrificed a few features along the way - which is where the pricing caveats come in. The standard $9 model, of which there is a limit of 5,000 units for Kickstarter backers, has a composite video output; adding HDMI, built-in to the Pi, increases the cost to $24, while VGA is available as a halfway-house between the two at $19. In all cases, there's shipping to account for - which, for UK backers, increases the $9 model to a rather less impressive $29.

All models include a 1GHz AllWinner ARM processor, 512MB of RAM and 4GB of integrated storage, along with 802.11/b/g/n Wi-Fi and Bluetooth 4.0 connectivity - a feature missing from its berry-themed rival. The system runs Linux with the Lxde desktop, promising laptop- or desktop-class functionality including the LibreOffice productivity suite, Chromium web browser and support for game emulation. A Pocket CHIP model adds a basic keyboard and 4.3" touch-screen display, along with a battery capable of running the device for up to five hours.

The campaign has already proven a smashing success, rasising nearly $140,000 at the time of writing on a mere $50,000 goal and with 29 days still to run. More information is available on the campaign website. 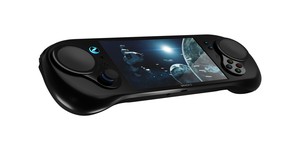 For more than an Indiegogo pledge, oddly.

Gareth Halfacree takes the dinky CHIP and PocketCHIP computers for a spin. Still retailing for £30 or less.