Launched prior to the Raspberry Pi, the original BeagleBone was designed as a development platform for users looking to grow from a limited microcontroller environment to a full microcomputer. Designed to combine the power of the ARM-based BeagleBoard platform with the general-purpose input-output (GPIO) capabilities of the Arduino microcontroller, the BeagleBone packed a 720MHz ARM Cortex-A8 processor, 256MB of DDR2 RAM and two 46-pin expansion headers into a tiny credit-card sized form factor.

When the Raspberry Pi launched to great fanfare, however, users started to question the cost of the BeagleBone: while it offers sigificantly improved performance over the older processor offered by the Pi, it costs more than twice as much at £76 and has no video output without an optional £40 HDMI add-on. The market responded predictably: while sales of the BeagleBone, which offers support for Android and Ubuntu lacking from the Pi along with a more powerful processor and vastly improved GPIO capabilities, continue to more technical types who need the extra performance, the Pi tapped into the mass market in a way that no ARM-based development board had ever managed before - selling more than a million units in its first year on sale.

Now, the creators of the BeagleBone - Jason Kridner and Geral Coley, engineers at ARM licensee Texas Instruments - have hit back with the launch of the BeagleBone Black. Despite its vastly reduced cost - just £34 including postage, or around 10 per cent more than a Raspberry Pi Model B - the design has been greatly improved over its predecessor. The device is now usable as a standalone microcomputer straight from the box thanks to a micro-HDMI display output, the processor has been upgraded to a more capable 1GHz model, and the 256MB of DDR2 memory replaced with 512MB of lower-power DDR3. The device also now includes on-board flash storage, which comes pre-loaded with Angstrom Linux, while tinkerers can boot from serial, USB or micro-SD to load Android, Ubuntu or other ARM-compatible operating systems.

The device retains the two 46-pin expansion headers, allowing it to work with existing BeagleBone 'capes' - add-on boards that increase its capabilities, analogous to the 'shields' of the Arduino world. Unlike the Pi, to which comparisons will be inevitably drawn, the device is also full open: the official site includes downloadable schematics, bill of materials, PCB layout files and reference manuals - everything that is needed to build a BeagleBone Black yourself, should you have access to surface-mount production facilities.

The BeagleBone Black has officially launched in the US, with the first models expected to hit the UK in May. For those eager to get started as quickly as possible, Farnell is currently taking pre-orders at £27.87 excluding VAT - only slightly more than the Raspberry Pi Model B at £26.48 excluding VAT. If you're not yet convinced, a video tour of the device is reproduced below. 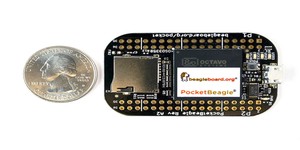 Impressive specs in a tiny package. Opts for MIPS, rather than ARM.