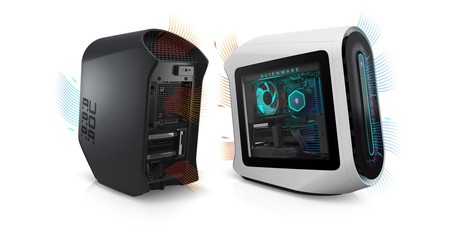 Alienware is celebrating its 25th birthday. There will be a special Twitch stream later today (2pm US central time, 8pm UK time) but we already have a good idea of the headlining product from the event thanks to a press release about a new flagship desktop from the Dell-owned gaming brand. The new desktop PC Alienware wants to wow us with is a revamped Aurora system. The new design isn't very different to the one that is available currently, but looking back at the Bit-Tech archives, we haven't reviewed an Alienware Aurora since 2010, so this is markedly different to that machine. If you are familiar with the current Alienware Aurora design, the new one is rather similar but looks a bit plumper and features an optional transparent left side panel. The extra space (said to be 50 per cent greater than the Aurora R12) allows for bulkier standard hardware inside, with fewer worries about airflow. Meanwhile, the side window gives owners a view of the LED lighting of the components and fans that are fitted, as well providing evidence of Alienware's "meticulous internal cable management".

Another little new feature of the tool-less chassis that might appeal to some, particularly eSports athletes, is the optional magnetic rear cable cover. According to the gaming PC maker, this will be a popular addition as eSports systems are often seen from the rear and the cover presents a new sleek façade – clear of cables and ports clutter. Every new Alienware Aurora comes with at least two 120mm fans (intake and exhaust), but higher spec models will be fitted with up to four fans and liquid cooling options. The extra chassis capacity and airflow refinements mean that the new Aurora is up to 16 per cent quieter when idling, and up to 9 per cent quieter during intensive workloads. When Alienware tested the new chassis and the old one with the same components, they found the new chassis to run games at up to five per cent faster thanks to the improved cooling.

However, at this time, Alienware is still being cagey about the max specs of the anniversary Aurora gaming desktop PC. All we know is that it will come with up to a GeForce RTX 3090. For CPUs, perhaps Alienware is waiting for the latest and greatest from Intel and AMD to become available before talking about max specs, but we should hear more info before the year is out.

When it becomes available, the new Aurora will be made available in Lunar Light and Dark Side of the Moon finishes.