Dell subsidiary Alienware has confirmed plans to release a Steam Machine later this year, dubbed the Alienware Alpha and based on Windows rather than Valve's Linux-based SteamOS platform.

While it's not clear whether the company's decision has been impacted by Valve's move to delay the launch of its own Steam Machine and Steam Controller hardware following tester feedback, the Alienware Alpha will ship with Windows 8.1 as its stock operating system with the option to install SteamOS as a replacement or dual-boot operating system once it is officially released commercially.

UK pricing has yet to be confirmed, but Alienware has stated it will launch a base model Alpha at $549 featuring a Haswell-based Intel Core-i3 processor, 4GB of RAM, a 2GB GDDR5 Nvidia Maxwell-based GPU which the company claims represents a semi-custom design, and integrated gigabit Ethernet, 802.11ac wireless and Bluetooth connectivity. Interestingly, the machine includes both HDMI output and input, similar to the pass-through capabilities of Microsoft's Xbox One console.

Upgrades available at launch will include a move to Core-i5 or Core-i7 processors, 8GB of memory and improved wireless capabilities. All models will also ship with a game pad, but thanks to Valve's decision to delay the launch of its Steam Controller Alienware has opted for the tried-and-tested Microsoft Xbox 360 controller. The system will also boot into Steam's Big Picture Mode by default, although this can be quit or overridden to expose the standard Windows 8.1 user interface.

The Alienware Alpha is one of a number of small form factor PCs due to launch as part of Valve's Steam Machine programme this year, even as Valve itself has shifted its own focus to a 2015 launch for the first own-brand device from the company. 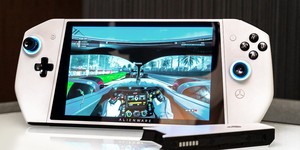 There are catches, mind.