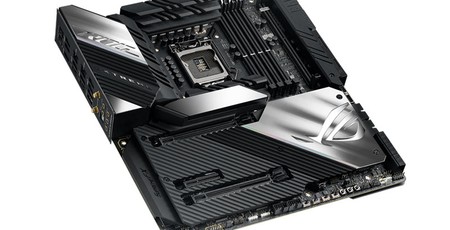 Asus, like many motherboard vendors, recently announced a raft of new motherboards featuring the Intel Z590 desktop chipset. These motherboards from the likes of Asus, Gigabyte and MSI started to become available last week, so eager upgraders could be ready for Rocket Lake-S. Now the new motherboard have started to filter through, and product pages fully populate with details and specs, a few interesting features are starting to become apparent. Firstly, as per our headline, it has been noticed by Twitter tech enthusiast @momomo_us that Asus ROG Z590 motherboards are new starting to come with MemTest86 built into the UEFI. This is a popular tool for people who regularly build, troubleshoot and tune PCs. It is useful, as the name heavily implies, for testing the RAM you have installed – and here it is no boot disk needed. Furthermore, it appears to be the Pro version in the screenshots – 'a $44 value' as our chums across the Atlantic would say.

Another software feature bundled with the latest ROG motherboards appears to be AIDA64 Extreme. This is available as part of Asus' software suite of tools like Armoury on a range of boards including ROG B560 ones and buyers get a "60 days AIDA64 Extreme subscription and intuitive UEFI BIOS dashboard," as part of the deal.

Motherboard M.2 slots can be fiddly to populate, especially if the system is already built and this is an upgrade. The M.2 gum stick is easy to slot in but you need to actually unscrew a retaining screw first, then hold the M.2 in place carefully inserting the screw without losing it somewhere in your chassis. It isn't brain surgery but for a modern accoutrement is perhaps unusual in introducing more fiddle than you might expect.

Asus showed off its Q-Latch system at CES 2021 and the simple rotating retaining system looked like it could very easily end M.2 screw shenanigans. However, it has rcenetly became apparent that M.2 Q-Latch is missing on high-end motherboards like the ROG Maximum XIII Extreme and Hero  - according to recently populated product pages. However some product pages, like that of other premium ROG, Prime, and TUF boards do mention and boast of the so-called Q-Latch system. It isn't likely to be an oversight by Asus though – the top motherboards come with large M.2 heatsinks pre-supplied and the Q-Latch might need a design tweak to work with them. In these designed the M.2 retaining screw does look bigger than standard through.