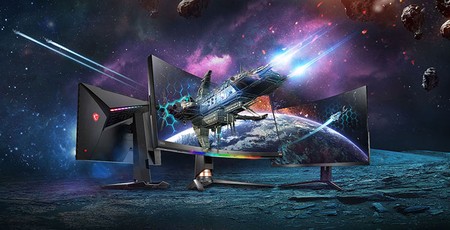 Nvidia appears to have quietly changed how it certifies gaming monitors as being worthy of bearing the G-Sync Ultimate logo. As Nvidia has moved the needle downwards, from VESA DisplayHDR 1000 with FALD, to embrace VESA DisplayHDR 600 and even VESA DisplayHDR 400 models, one must assume there is some partner pressure being applied in the background. The dilution of the G-Sync Ultimate standard isn't consumer-friendly of course – it muddies the waters, devalues premium products consumers already own, and may make people think some monitors are great bargains when they are not.

The Twitter account of PC Monitors Info appears to have first shone a spotlight on this quiet change by Nvidia. It noticed some new high end G-Sync Ultimate monitors launched by the likes of Acer, AOC, LG and MSI didn't seem to be quite as high end as they used to be to gain this Nvidia certification/logo.

With its curiosity aroused, @pcmonitors fired up the WayBackMachine and the edits were plain to see. You can clearly see the removal of references to 'Best HDR 1000 nits' and in its place Nvidia refers to 'Lifelike HDR'.

"High level HDR (VESA DisplayHDR 1000 support) was THE selling point for 'G-Sync Ultimate'," wrote the Twitterer. "It's what news coverage focused on when it was first announced."

Hopefully Nvidia has just been a bit slow to publicise this change and will make it clearer that it has done some G-Sync category massaging. As is often the case with tech though, buyers must be vigilant with their research of potential purchases. A quick glance through the spec of the new MSI MEG MEG381CQR or LG 34GP950G from CES 2021 would reveal that they 'only' support VESA DisplayHDR 600, for example. The only VESA DisplayHDR 400 monitor that we know to be certified as G-Sync Ultimate, so far, is the Acer X34S - but perhaps the AOC Agon AG274QG is HDR 400 as well.