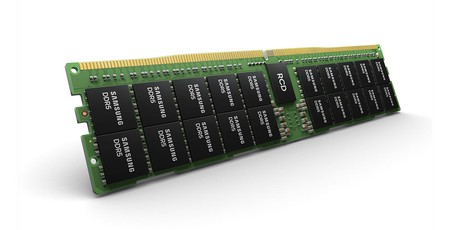 Samsung has today announced that it has developed industry-first HKMG-based DDR5 memory modules. The first such module in its DDR5 portfolio comes in at a whopping 512GB and operates at DDR5-7200. Samsung says it has developed this memory to appeal to markets such as supercomputing, artificial intelligence (AI) and machine learning (ML), as well as data analytics. Young-Soo Sohn, VP of the DRAM Memory Planning/Enabling Group at Samsung Electronics, boasted that Samsung is the only semiconductor company capable of wielding logic and memory know-how to develop these High-K Metal Gate (HKMG) DRAM modules. It is explained that advanced HKMG technology is more traditionally used in logic semiconductors, but when applied to DRAM the process helps increase performance and delivers an approximate 13 per cent reduction in power consumption. Samsung's 512GB DDR5 memory modules are built with an 8-layer TSV structure using 16Gb DRAM ICs to enable this capacity.

Though above Samsung boasted about its semiconductor prowess meaning it was the first, and perhaps only firm that can implement HKMG-based DDR5 it welcomed the close co-operation of engineering teams from Intel. Furthermore, it is noted that the new DRAM is performance-optimized and compatible with Intel's Xeon Sapphire Rapids processors. This looks likely to be the first application of these DDR5 modules that we will know about.