HP has become the latest company to buy in to Google's Chromebook programme, launching an 11" model of its own at a very attractive price point.

Designed to promote tie-in with Google's services, a Chromebook is a laptop based around the company's cloud-powered Chrome OS software. Based on a Linux kernel, Chrome OS features very few local applications; instead, the primary user interface is the company's Chrome browser, and all applications are web-based. For those who spend a lot of time in the browser anyway, it's a tempting proposition: with no real local software, there's no need for software updates, maintenance, anti-virus, or the regular upgrade costs associated with traditional software ownership.

HP's Chromebook, announced for the UK late last night, is a particularly compact example of the species: based around an 11.6" in-plane switching (IPS) display offering a claimed 60 per cent colour gamut and 300 nit brightness, the device measures just 297mm x 192mm and is 17.6mm thick. Although its weight, at 1.04Kg, isn't the lightest around, that does include a battery capable of running the system for around six hours of active use and which charges, tablet-style, through a micro-USB port found on the laptop body.

This surprisingly log run-time comes courtesy of the system-on-chip processor at the heart of the HP Chromebook: a Samsung Exynos 5250 GAIA application processor, which packs two ARM Cortex-A15 processing cores running at 1.7GHz and a Mali-T604 graphics processor. Usually, a switch to the ARM architecture would spell trouble for legacy software written for the x86 instruction set - but as Chrome OS runs everything in the browser, compatibility isn't an issue here.

There are drawbacks to the Chromebook approach, of course. Those who value their privacy will likely flinch at the thought of running an operating system created by one of the world's biggest advertising companies, and doubly so as everything you do on a Chromebook is channelled through the company's web servers; likewise, anyone who requires native software that doesn't run in a browser or who frequently works away from an internet connection will find a Chromebook a poor choice.

Where the Chromebooks shine, however, is in price: the HP Chromebook 11 is listed as 'Coming Soon' on Google Play at just £229, with a higher-priced version featuring Long Term Evolution (LTE) mobile broadband expected to appear in the near future. 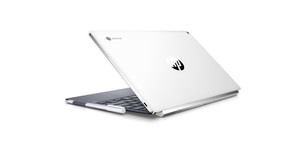