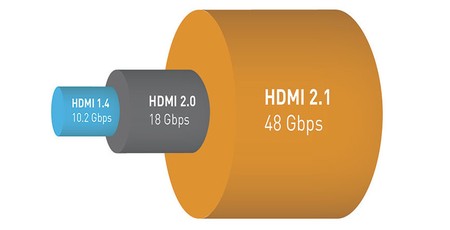 The High-Definition Multimedia Interface Forum (HDMI Forum) has announced the completion of the HDMI 2.1 specification, bringing the standard's first support for resolutions up to 10K and the slightly redundantly-named dynamic high-dynamic range (HDR).

Designed to be backwards compatible with existing HDMI standards, HDMI 2.1's primary reason for existing is to boost the display resolutions supported by the ubiquitous cable. A boost from 18Gb/s peak bandwidth in HDMI 2.1 - itself a major increase from HDMI 1.4's 10.2Gb/s - to 48Gb/s allows for high-resolution, high-refresh rate displays including Ultra HD (4K) at 120Hz and 8K at 60Hz, while resolutions of up to 10K are supported at lower refresh rates for 'commercial AV [audiovisual], industrial, and speciality usages.'

These improvements, however, come at a cost. The need for ultra-low electromagnetic interference (EMI) to support the higher bandwidth demands means that older HDMI 2.0 cables aren't compatible with the new standard, which requires cables specifically labelled as Ultra High Speed HDMI 2.1.

The HDMI Forum has announced it will be publishing compliance test specifications (CTS) for device certification in stages through to the third quarter of 2018, meaning it's unlikely that any HDMI 2.1 devices will be hitting the market before the end of 2018 at the very earliest.