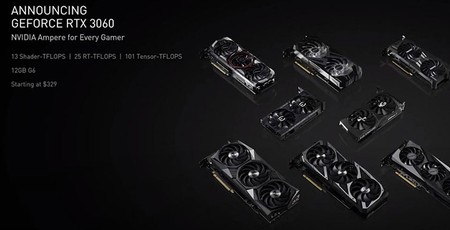 Nvidia has launched the latest addition to its consumer Ampere GeForce RTX 30 series of graphics cards. The new GeForce RTX 3060 with 12GB GDDR6 will be the cheapest entry yet, coming in at a base price of US$329, significantly less than the US$399 RTX 3060 Ti. However, despite having much more VRAM than the Ti, the latest product from Nvidia has a significantly pared back GPU and that memory is on a narrower 192-bit bus (the Ti uses 256-bits). Cutting straight to the chase, the Ge Force RTX 3060 family comparison chart is reproduced above and you can see the key spec differences you will get for your money. Starting with the 'GPU Engine' the new graphics card, touted by Nvidia as the natural successor to the Steam stats busting GTX 1060, has 36 per cent fewer CUDA cores which likely means that it has 28 SMs with 28 RT Cores and 112 Tensor cores. Its boost clock is a bit faster than the RTX 3060 Ti, but base clock lags a little. The new GPU is rated at 170W.

What about performance? Nvidia said that the new RTX 3060 12GB was capable of the following: In comparison with older generation graphics cards Nvidia produced the chart above. As you can see, the tests were done at 1080p, and Nvidia board partners like Gigabyte are saying these products provide the "best experience for ultimate 1080p gameplay". The Ampere card really casts a long shadow on its Pascal ancestor (6GB) but the RTX 2060 (6GB) is only between 10 and 20 per cent behind it – so the new card looks very much like it could be matched by an older RX 2060 Super (8GB).

As mentioned in the intro, the guide price for GeForce RTX 3060 12GB graphics cards is US$329. Nvidia says that cards will start to become available at the end of February.