Nvidia has officially opened its GeForce Experience software to the public, launching an open beta for the software that aims to provide an easy way to optimise game performance on your PC.

The software package is designed to make it easier to get a decent framerate from your games - providing you're running an Nvidia graphics chip, naturally. When launched, the software analyses system specifications - taking into account your CPU, GPU and monitor resolution - and downloads pre-configured settings files for popular games. Using these files, Nvidia claims, the image quality and performance of the games are optimised.

For those who like to take a more active interest in their games, the software provides details of exactly what it's changing in each case - ranging from anti-aliasing and resolution settings to game-specific options like enabling or disabling bullet impact effects in Modern Warfare 3 or altering the depth of field for a particular size or aspect ratio of monitor - with screenshots demonstrating the difference the setting makes.

As well as providing an easy to way to quickly get decent performance from your GeForce-based gaming rig, the software is designed to monitor for new driver updates and prompt the user to download and install the software. The changelog is boiled down into a set of bullet-points highlighting the most important improvements, although it doesn't appear to be possible at present to tell the GeForce Experience software to pick up beta drivers for those gamers who prefer to live on the bleeding edge.

This, and other yet-unannounced features, are likely to come in a future release, however: GeForce Experience is currently in beta, but Nvidia is putting a great deal of time and effort into the platform. The company's recently-announced Project Shield console, for example, relies on the GeForce Experience and the settings files it downloads from Nvidia's servers to configure PC games for streaming to the Android-based hand-held console - one of the reasons, alongside its reliance on a hardware H.264 encoder built into Kepler-class GPUs and technologies developed for the GeForce Grid cloud gaming platform, the game streaming functionality of Shield will be limited to gaming rigs with a GeForce GTX 650 or higher GPU. 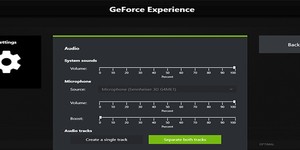