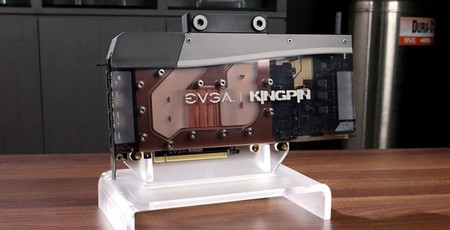 A few hours ago EVGA's Global Product Management Director, Jacob Freeman, took to Twitter to unveil the EVGA RTX 3090 Kingpin Hydro Copper graphics card. This graphics card appears to be based upon the same PCB as the EVGA GeForce RTX 3090 Kingpin AiO but of course designed to fit into systems with custom liquid cooling setups.

The upcoming EVGA RTX 3090 Kingpin Hydro Copper is a single slot design, as it is still possible to achieve this with careful design and adequate LCS. Nevertheless, EVGA has still managed to retain the cool OLED status display, according to a follow up reply from Freeman to a Twitter question. Unfortunately, this display cannot be seen at all in the single teaser photo shared by the EVGA exec. This RTX 3090 comes with triple 8-pin power connectors, as you might expect. The PCI bracket features 3x DP and 1x HDMI monitor connectors.

As for clocks and OC features, without further details it is probably worth looking at the previously detailed EVGA GeForce RTX 3090 Kingpin Hybrid AiO model. This card featured an out of the box GPU boost clock of 1,920MHz, and EVGA has post-launch released a custom 450W XOC BIOS for it – it is hard to imagine anyone satisfied with sticking to out of the box clocks with these Kingpin GPUs.

Freeman revealed that the EVGA RTX 3090 Kingpin Hydro Copper will be available as pictured, attached to a bundled PCie graphics card. However, those who only want the Kingpin HC waterblock will be able to buy that on its own via the EVGA online store too. EVGA already offers two RTX 3090 Hydro Copper cards; the FTW HC and XC3 Ultra HC - which would likely satisfy all but the most extreme speed-thirsty PC enthusiasts.