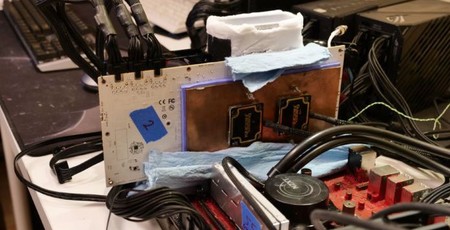 Purchasing an Nvidia GeForce RTX 3090 isn't a decision one makes lightly. Even at launch it was widely noted that this top-end consumer graphics card cost quite a lot more than the one next rung down, for meagre real-world performance gains. Now with the astronomical prices most buyers are facing, and the new RTX 3080 Ti closing in behind it, laying down your hard-earned cash for an RTX 3090 may be an even more difficult choice to make. When the extra performance costs so much it is right to consider things very carefully, and while newer GeForce RTX 3090 graphics cards might not be noticeably slower in day to day usage by gamers and enthusiasts, it is an unfortunate trend that has been noticed within the upper echelons of the overclocking community.

Nordic Hardware reports that record-breaking and world 3rd ranking overclocker Rauf, from Sweden, working alongside colleagues from Greece, has noticed a subtle but meaningful change for those fighting for the top spots in the HWBot overclocking leagues. In brief, the OC experts say that older editions could be run at a voltage of 1.5 volts, however the new RTX 3080 Ti and newer RTX 3090 units respond favourably to no more than 1.4 volts.

Admittedly, there hasn't been a huge sample of RTX 3090 cards through Rauf's hands – probably eight in total, but Rauf and his colleagues set several world records using previously produced RTX 3090 units – yet they are struggling now to move things forward. The record-breaking RTX 3090 cards of old could reach between 2,850 and 2,885MHz. Newer cards are hitting a wall at under 2,780MHz. At the time of writing we don't know what is happening with these, the halo products in Nvidia's RTX30 series, but it is slightly concerning when newer tech desirables don't improve over time, but start dragging their heels. It could be another sign of the stretched supplies we are facing – GPUs, memory, other key ICs – it is hard to tell without more tests or an official statement from team green.

I will keep an eye open for any developments in this story, seeing if there are official comments made by Nvidia for example. The best result, of course, would be we see a fresh set of RTX 3090 world records made in the coming weeks / months, which might mean that Rauf and team have simply had bad luck in the silicon lottery recently.