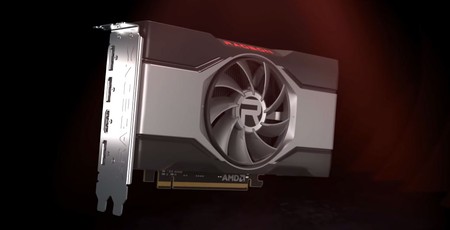 After a prolonged period of anticipation, since this GPU was first hinted at back at CES in January, AMD has finally gone official with the Radeon 6600 XT graphics card for PC desktops. Of course, this GPU tones down the power/performance compared to the Radeon 6700 XT, and it is built using a specific, smaller 'Navi 23' die, rather than a cut down bigger GPU. Above, you can see the key specifications of a Radeon RX 6600 XT, which AMD is pitching at those looking to indulge in "epic 1080p gaming" fun. Its 32CUs, 2,359MHz game clock / 2,589MHz boost clock, 32MB Infinity Cache, and 8GB GDDR6 RAM can help propel your 1080p max-settings gaming experiences so that you can take full advantage of your super-fast refresh rate monitor. Check out the example gaming performance figures below. Probably a more interesting comparison to some is between the new Radeon RX 6600 XT graphics card and Nvidia's similar MSRP GeForce RTX 3060 12GB. According to AMD's testing in a suite of 10 modern and popular titles, AMD's new contender is "up to 15 per cent faster on average," when playing on the same system at 1080p max settings. Some of the games highlighted have raytracing, DLSS, and FSR features that aren't used in the performance comparison. AMD partners are set to release their various Radeon RX 6600 XT designs from Wednesday, 11th August, but I'm not sure if reviews will be allowed shortly before this date. Looking around the web, it looks like some partners have shared info about their RX 6600 XT designs, while some have yet to get around to it. AMD shared the slide below with a quick visual overview of designs that you will be seeing - ASRock even has a Mini-ITX option for you.