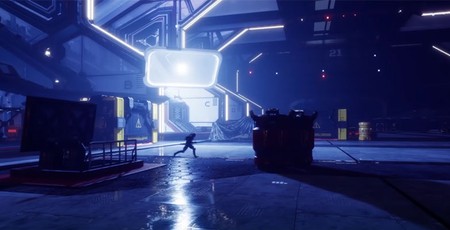 AMD is teasing the release of its Hangar 21 RDNA 2 tech demo this Thursday. As you will know the AMD Radeon RX 6800 and RX 6800 XT graphics cards are due to launch sometime today, so one might have expected this tech demo to go live at the same time but for some reason AMD has decided to hold it back. Nevertheless, in addition to the teasing mention of this video release on Twitter, AMD has provided a lengthy glimpse of things to come on YouTube, as embedded below.

The video above is available to play in qualities up to 1080p/60fps. The video is a decent length for a teaser, at three quarters of a minute. In this brief preview you get to see AMD's armoured hooded dual samurai sword wielding hero sneak stealthily around a hangar full of spacecraft – presumably the titular Hangar 21. Regardless of the story board, the video does a pretty good job of showing off the "RDNA 2 gaming architecture in action," with plenty of shadows, reflections and other lighting effects to be seen.

Come back on Thursday and this news post will be updated with the full video from AMD. Perhaps that video will include some more tech details about resolutions, quality settings, and framerates using various GPUs.

The full demo has now been released: